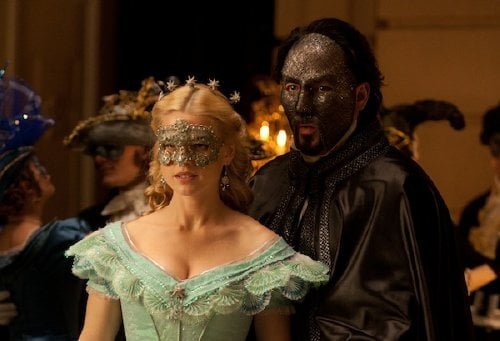 A maniacal killer is loose in 1849 Baltimore and his murders exactly mimic the stories of the popular horrormeister Edgar Allen Poe (John Cusack). Police detective Emmett Fields (Luke Evans) recognizes the link and recruits the legendary writer to help him find the killer and put a stop to his murder spree in “The Raven.”

In 1849 Baltimore, Edgar Allan Poe (John Cusack) has been reduced to addressing ladies' clubs on writing when a serial killer begins using his famous stories for murderous tableaux. Detective Fields (Matthew Morrison lookalike Luke Evans, "Immortals") quickly clears him from suspicion, but asks for his help. Poe is further motivated when his fiancee (Alice Eve, "Starter for 10," "She's Out of My League") is kidnapped and no longer begs for drink in the local pub by reciting his best known work, "The Raven." Director James McTeigue ("V for Vendetta") has created a nicely crafted film with loads of atmosphere and grisly crime scenes, but screenwriters Ben Livingston and Hannah Shakespeare ("Loverboy") fail utterly with this insipid twist on Stephen King's "Misery." Add to this a one note performance from the 6'3" Cusack playing the 5'8" Poe and the result is pretty anemic. The movie begins well, with Poe's mysterious death on a park bench, before flashing back to the first murder, a locked door slaying of a semi-decapitated woman and her young daughter, stuffed up a chimney. We learn of Poe's alcoholic penury (note 'Downton Abbey's' John Bates, Brendan Coyle, as his bartender) and his iffy status with Baltimore newspaper editor Maddux (Kevin McNally, 'Downton Abbey'), who has just pulled Poe's latest review from publication (Poe is incensed that his review of Longfellow has been replaced by the man himself). Poe's affair with Emily Hamilton, a wealthy beauty, is kept secret from her father, Captain Hamilton (Brendan Gleeson, "The Guard"), who despises Poe. We're left to wonder what she sees in a penniless drunk. There's an extremely gruesome recreation of 'The Pit and the Pendulum,' one of the film's highlights, but it does little to help Fields and Poe crack the case. When a red mask is found at the next murder, all eyes turn to Hamilton, whose upcoming costume ball is now believed a target. Hamilton insists on going forward, but is convinced by Fields to add police protection. But when a skeleton arrives on horseback and rides right into the ballroom, Emily is whisked away nonetheless. When we next see her, she's been buried alive, courtesy of 'The Cask of Amontillado.' It's a pity that Evans and Eve upstage Cusack, an actor who never rally got his due, but he plays Poe with one expression throughout the film (ironically, Poe calls his pub critics 'mouthbreathers' yet Cusack rarely closes his own). Eve is a strong, vivacious heroine, even when buried and Evans cloaks himself in period sleuthing. Gleeson hasn't much to do. But the film's production team deserve praise here. Makeup is excellent, especially of the gruesome variety. Costume and art direction add to the gothic vibe, although Lucas Vidal's score is more generic action/romance than eerie. But all this in service of a story where the killer's 'diabolical' use of the victimized writer's imagination and the revelation of his identity seem utterly random, like the screenwriters put plot elements on a whiteboard then never bothered to try and weave them together in intriguing ways. One wonders just how different this film might have been with Nicolas Cage cast in the lead - at least it would have had some camp appeal. Oh, and an 1849 newspaper headline here uses the phrase 'serial killer more than a century before the phrase was coined by FBI profiler Robert Ressler.

While heavy on atmosphere, the screenplay for “The Raven” is muddled mash of murders that chronicle Poe’s stories (in no particular order). The reenactments are sometimes very imaginative, like the depiction of The Pit and the Pendulum, and production values are high but the script, by Ben Livingston and Hannah Shakespeare, does not live up to the look of the film.. Too much is jammed into the story and the whole affair feels rushed. John Cusack is bland as the troubled Poe. He has few expressions, the primary one being slack-jawed befuddlement. Luke Evans has good onscreen chemistry as the dedicated detective in charge of the manhunt for the maniac murderer (called, inappropriately for the time, a serial killer here). Alice Eve plays Poe’s beautiful fiancée Emily and, in what could have been a two-dimensional, secondary character, creates a strong, resourceful femme persona (making me wonder why she would be with the moody, alcoholic, macabre-minded poet). Director James McTeigue does a decent job with individual scenes, like when the killer kidnaps Emily and buries her alive. The claustrophobia and terror Emily feels is palpable and the actress is credible in her desperation and fear. The period look is dead on and adds to the moody atmosphere of “The Raven,” as does art direction, costume design and makeup. Unfortunately, looks alone do not make a film. A good story is needed, too.