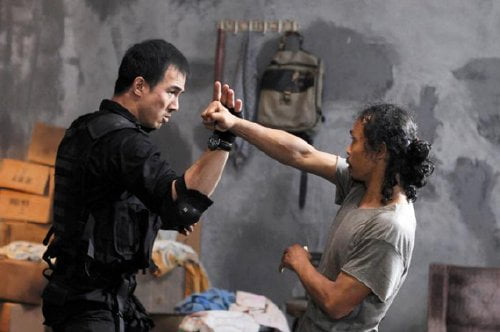 A SWAT team approaches its target: the building that houses drug kingpin Tama (Ray Sahetapy) and his ruthless, heavily-armed minions. The cops get into the lair without a problem but, unbeknownst to them, they are under constant camera surveillance. Tama and his men are ready and waiting for the invasion in “The Raid: Redemption.”

Rookie elite special forces cop Rama (Pencak Silat martial arts champion, co-choreographer Iko Uwais) prepares for work solemnly before leaving his pregnant wife and father. That day, Lieutenant Wahyu (Pierre Gruno) has called for Rama's Unit Commander Jaka (Indonesian Judo champion Joe Taslim), to do something the police have shied away from for the past decade - storm the fifteen story building that houses Jakarta's most notorious crime lord Tama (Ray Sahetaphy) in "The Raid: Redemption." Growing frustrated while waiting for funding for his sophomore film, Berandal, Welsh writer/editor/director Gareth Huw Evans ("Merantau") decided to develop a cheaper, one-location prequel featuring the same central character. He'll have no financing trouble now that his martial arts action extravaganza has built huge buzz on the festival circuit. Evans knows that there's nothing like the real thing, and so, working with his expert stars, has fashioned elaborate fight sequences which are shot by director of photography Matt Flannery so that - gasp - you can actually see every kick, thump and jab. Combined with a simple tale of two brothers on opposite sides of the law amidst police corruption, a stunning sound design and frenetic pace, "The Raid: Redemption" is an exhilarating piece of genre filmmaking. With some brief exposition from Jaka, we learn about Tama's long reign of terror supported by the fearsome Mad Dog (Co-Choreographer Yahan Ruhian), who 'would take down walls' for his boss, and financial brain Andi (Doni Alamsyah, "Merantau"). We've just witnessed Tama's brutality as five men are executed kneeling on a plastic sheet in his office - when the gun runs out of bullets for the fifth, Tama just grasps a hammer. Meanwhile the unit takes out the building's external lookout and begins to ascend, very carefully. But not carefully enough to elude a teenaged spotter who rushes to report to his boss. He's shot through a closed door, but his killing is witnessed by another youngster who gets the word through. Tama takes to his intercom system and announces to his less than illustrious residents than anyone who assists ridding the building of this 'infestation' will have lifetime shelter under his roof. There are, oddly, some regular residents, too, like the gentleman Rama takes pity on who's trying to get needed medication to his wife inside. Obviously Rama can relate to this man and the civilian provides the script with a destination - apartment 726 - for our hero to shelter in on his way to the fifteenth floor. What these guys face inside almost makes WWII's Normandy Beach landing look low key. Gangs armed with machetes, some nasty looking ridged knives and bone cracking martial arts moves (a number of people get their spines cracked in teeth shattering ways) outnumber the cops, whose corpses begin to be piled up outside. Neighboring snipers use tricks of light to target them. Rama cuts a hole through the floor as an escape route, drops through and is immediately overpowered. When he does get his injured friend Bowo (Tegar Satrya) to 726, the occupants are reluctant to let him in. Hidden behind a false wall, they endure the thrusting machete of Mad Dog himself. Rama must grip the blade as its withdrawn from its last thrust to remove the telltale traces of his own blood. The film offers just the right amount of 'down time' exposition to properly pace the action, so that we gradually learn of two betrayals, one of the unit itself, the other of Tama. The action is not only real, but choreographed with wit - in one case we see a man literally stab himself in the back - repeatedly - in another, a thug's head is smacked into descending points on a wall to the film's techno beat (a new score was created for "The Raid's" theatrical release by Shinoda of Linkin Park and Daft Punk collaborator Joseph Trapanese). The sound design aids immeasurably in conveying the physical violence with the sound of blows hitting their targets, the ringing vacuum of an explosion's aftershock and the men's 'Yaaaaaah!' war cries. The film's climatic three way fight is introduced by the hum of fluorescent lighting, foreshadowing a mortal strike. Evans punches his kill shots by editing away from these instances of most extreme violence just before the blow lands, actually intensifying their effectiveness. There are a couple of small nits, like the rationale for civilians to live within these dangerous walls or just how Jaka knows he still has two men alive in the building whom he won't leave without. But these are minor issues. Evans has formed a small industry for himself since traveling to Indonesia to film a documentary on Pencak Silat, meeting his star who was then a truck driver for an Indonesian telecom company. "The Raid: Redemption" ends just where it should to pick up Rama's story for the next installment which promises to be untethered from the constraints of one building.

Welsh-born writer/director Gareth Evans goes to Indonesia to tell his crime tale through the eyes of rookie cop, Rama (Iko Uwais), who is on a mission of his own as the heavily armed SWAT team invades Tama’s lair. His mission is a personal one but that really does not matter – it is the fights we are here for. “The Raid” is a near non-stop action flick that begins with a copious number of shootouts between the 20 cops and an army of bloodthirsty, AK47-carrying, machete-wielding martial arts mavens. The battles begin with gunfights with automatic weapons and a ton of bullets and a steadily building body count on both sides. Once the bullets run out, the action switches to knives and machetes as the last cops standing, including Rama (who is a one-man army in his own right), try to survive the relentless, deadly onslaught of Tama’s henchmen. Then, the blades get used up and the fighters resort to fists and feet as the SWAT team, fast dwindling in number, must find a way to escape with their lives. In typical martial arts fashion, the bad guys always rush the hero one at a time (if the bad guys in movies ever figure out that they can rush the good guy at the same time…). I can forgive this overused good guy versus a horde of bad guys cliché, though. The fight scenes are many and always well-choreographed with the film culminating with a duet of hand-to-hand battles, one with Rama and the other with Mad Dog (newcomer Yayan Ruhian, a little bad guy who eats big guys for breakfast.) These fights last 10 or more minutes and are the topping on the martial arts cake. The fanboys (though not many others) will love this niche movie that squarely hits its target.