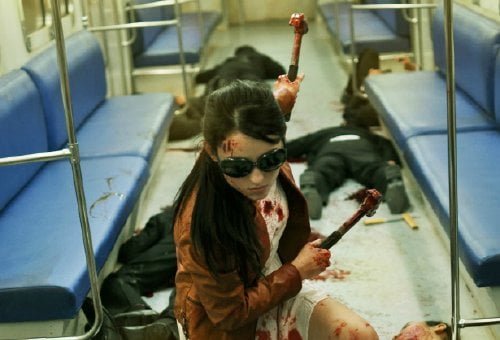 In “The Raid: Redemption (2011),” Rama (Iko Uwais) was the last cop standing after an epic battle between a Jakarta SWAT team and the minions of drug lord Tama (Ray Sahetapy). But, just when he thought he could return to his young wife and child, his superior sends him back undercover to make his way up the criminal hierarchy to ferret out corrupt, high-ranking police officers in “The Raid 2.”

After a grueling day of mayhem vanquishing drug lord Tama's Jakarta stronghold, rookie cop Rama (Iko Uwais, "The Raid: Redemption") just wants to go home to his wife and child. But his dying brother Andi tells him he must go to 'good' cop Bunawar (Cok Simbara) who informs him that Tama was just the tip of the iceberg and Rama will have a death sentence over his head if he doesn't go deep undercover and gun for big boss Bangun (Tio Pakusodewo) by sidling up to Bangun's imprisoned son Uco (Arifin Putra) in "The Raid 2." Writer/director Gareth Evans has sure found his balliwick in Asian crime martial arts actioners and he's upped his ante in this sequel which may be the most violent non cult film ever released. The action's been both opened up with more locations and closed in (a pileup in a prison toilet stall!) with Uwais and Ruhian choreographing stunts that might leave Jackie Chan breathless. Evans has also taken his first shot at a car chase which he's also turned into another extended fight scene. Genre fans will be exhilarated beyond belief, especially after they get a load of hammer girl (Julie Estelle) and bat boy (Very Tri Yulisman, "The Raid: Redemption"). Jailed with an alias of a rural thug named Yuda, Rama quickly establishes his cred by making mincemeat of them in a bathroom stall. His exploits earn a visit from Uco and Rama's positioned just where he wants to be. After one more outrageous set piece in a muddy prison yard which had me wondering how the cameraman managed to stay upright, Rama's released right into the lap of Bangun, who gives him a job, penthouse apartment and a guarantee that he will not be crossed. When the Yakuza Bangun has peacefully coexisted with take out long time hit man Prakoso (Yayan Ruhian, "The Raid's" Mad Dog), Uco's dead set on revenge, but Bangun will not act against boss Goto (Ken'ichi Endô, "Nobody Knows") leaving Uco ripe for the picking by Strangelovian crime boss Bejo (Alex Abbad, "Merantau") with their shared hatred of the Japanese. Rama, caught in the crossfire, finds an unexpected ally in the all out war which ensues. I have no idea who's being targeted by Hammer Girl on a subway car, but his army of bodyguards are no match for the hardware swinging beauty, the heiress apparent to Kill Bill's Gogo Yubari. Her partner in iconic crime is a baseball bat wielding psychopath who makes sickly music on skulls when he's not blasting them apart with speed balls. After a car chase that outdoes anything in the "Fast & Furious" franchise, Rama will be up against both at the same time before a final showdown. At least until we pick up on the next one the exhausted cop's left facing at this film's close. Evans has given us the rare sequel that trumps the original (this was the film he intended to make first but had to dial back upon due to budgetary constraints) and everything about the production is outstanding. Production design with its greens and blues is often reminiscent of the stylish but abhorrent "Only God Forgives," cinematography sometimes seems death defying and sound is visceral. "The Raid 2" is not for the squeamish nor those who'll take offense at audience members gleefully hooting at carnage (as was experienced at a press screening(!), along with subtitles 5 seconds out of synch).

If you ever wonder what it is like to be a modern day missionary in this bizarre, ever-changing world, then “The Rabbi Goes West” is the movie for you. The Bruk couple made the move from Brooklyn to Bozeman, Montana nine years ago as missionaries for the Chabad-Lubovitch Hassidic movement based in Crown Heights, New York, to reignite the faith of the Jewish population of that western state. Goal #1 for Chaim, when he arrived, was to install a certified mezuzah on the front door of every Jewish home. He continues to fulfill this goal. But, this documentary by Gerald Peary and Amy Geller is not just about the Bruks and their mission. As their story unfolds, other rabbis, also tending to their Montana flock, give their opinions – and they are various in their range, both pro and con. It is a clash of cultures as the Montana rabbis, used to the western way of life – one describes a Bozeman traffic jam as two drivers at a four-way stop that cannot decide who goes first – balk at the energetic New York rabbi trying to change their ways. “The Rabbi Goes West” gives an interesting and detailed microscopic look at the Jewish faith and culture in a place where one (a former Christian like me) would not expect there to be a Jewish faith and culture - I mean, it is Montana, after all!