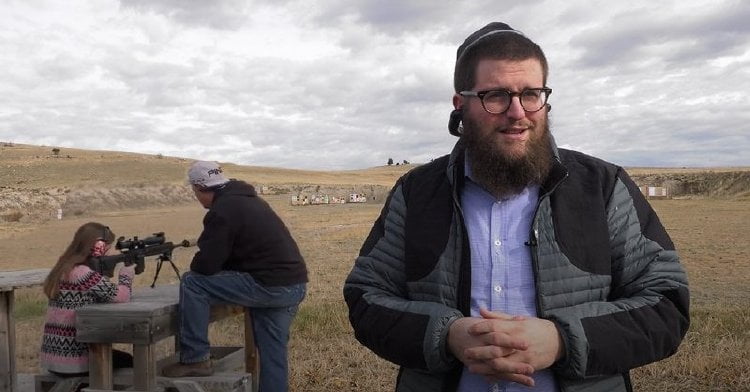 The great and vast state of Montana has about 40000 households, of which some 1000 are followers of the Jewish faith. Chabad Rabbi Chaim Bruk and his wife, Chavie, trek to the wild land to administer to the faithful of this far flung flock in “The Rabbi Goes West.”

In Bozeman, MT, Chabad rabbi Chaim Bruk has made it his mission to affix a mezuzah, a scroll containing prayers from the Torah, to the door of every Jew in the state. Chaim charms many with his bouncy personality and message that ‘Judaism should be fun.’ But Bozeman has an established synagogue as do other cities and towns in Montana and not all of them appreciate Chaim’s methods. Directors Amy Geller & Gerald Peary ("For the Love of Movies") explore the controversy in “The Rabbi Goes West.”

There have been many films and documentaries about Hassidic Judaism, but this one is made unique by its unlikely setting. One doesn’t consider Montana when thinking of the Jewish religion, let alone think of it as a hotbed of controversy among various sects.

Peary (who also wrote) and Geller (who also produced) structure their film with Chaim as their center, then spiral outwards to embrace other rabbis, their communities and points of view. Chaim and his wife Chavie, the codirector of his schul, have lived in Bozeman for 10 years, Chaim having found his calling at Brooklyn’s Crown Heights foundation of Rebbe Schneerman, who died in 1994 and whose messianic ideology caused schisms in the Orthodox community. As Rabbi Bruk enthuses that ‘anyone with a Mezuzah and a gun’ is safe in Montana, Bozeman’s reform rabbi Ed Stafman tells us that Chaim is ‘a missionary, not a rabbi.’ Stafman chafes with a bit of envy over Chaim’s marketing skills, noting that he accepts everyone for no dues or requirements but ‘lots of liquor’ as the filmmakers cut to a lively ‘Scotch and Sushi’ Sukkot celebration being held at the Bruks.

When Stormtrooper and its neo Nazis begin a hate assault against the Jewish community in nearby Whitefish, conservative rabbi Francine Roston expresses her displeasure with Chaim’s media grabbing campaign to fight it by sending a Torah to every Jewish household. She tells us he never invited her to be present at his press event and expresses concern about his planned expansion into her community. Chabad does not allow female rabbis, nor allow men and women to sit together during services.

Peary and Geller slowly build upon the initial impression they set with fly-on-the-wall observations and exterior commentary. The film features a lively score by Rob Jaret which mirrors its energetic protagonist and pacing.

There is an animated debate between Chaim and Ed where animosity, if not exasperation, is held in check, but nothing is resolved. By the end of “The Rabbi Goes West,” you may feel quite differently about the exuberant rabbi you met at the beginning.

If you ever wonder what it is like to be a modern day missionary in this bizarre, ever-changing world, then “The Rabbi Goes West” is the movie for you. The Bruk couple made the move from Brooklyn to Bozeman, Montana nine years ago as missionaries for the Chabad-Lubovitch Hassidic movement based in Crown Heights, New York, to reignite the faith of the Jewish population of that western state. Goal #1 for Chaim, when he arrived, was to install a certified mezuzah on the front door of every Jewish home. He continues to fulfill this goal.

But, this documentary by Gerald Peary and Amy Geller is not just about the Bruks and their mission. As their story unfolds, other rabbis, also tending to their Montana flock, give their opinions – and they are various in their range, both pro and con. It is a clash of cultures as the Montana rabbis, used to the western way of life – one describes a Bozeman traffic jam as two drivers at a four-way stop that cannot decide who goes first – balk at the energetic New York rabbi trying to change their ways.