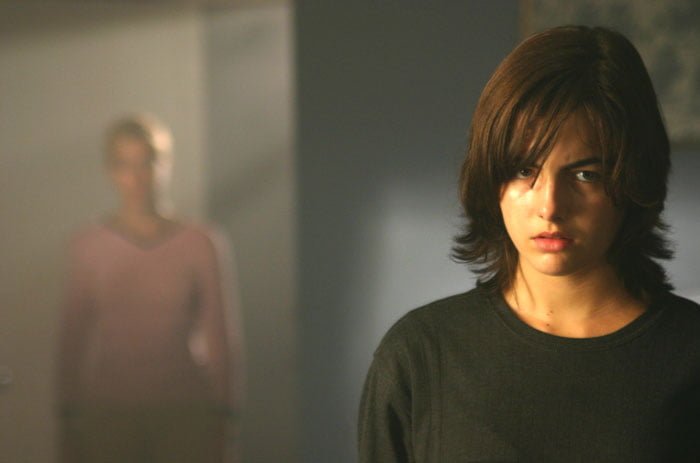 After the death of her father, Dot (Camilla Belle, "The Ballad of Jack and Rose") is taken in by her godparents Paul (Martin Donovan, "Saved!," "The Sentinel") and Olivia Deer (a leathery looking Edie Falco, HBO's "The Sopranos"), but their daughter Nina (Elisha Cuthbert, TV's "24," "House of Wax"), once Dot's friend, rejects the girl who's gone deaf and retreated to "The Quiet."

This load of hooey written by Abdi Nazemian and Micah Schraft pushes all those indie buttons - dysfunctional family, incest, teenage treachery and murder - but it's only pretentious claptrap masquerading as allegory. About the only good thing to say about "The Quiet" is that Cuthbert is actually affecting, but her performance is undercut by the conflicting motivations given her character. And what were Donovan and Falco thinking? Director Jamie Babbit ("But I'm a Cheerleader") blows out of the gate with a bad choice, opening narration from Belle which instructs us in basic fractional arithmetic in lieu of real character insight. Dot is cruelly taunted at high school by pretty Nina and her slutty best friend Michelle (Katy Mixon) and rejects the offer of adult helping hands. When the mousy mute slips into an abandoned music room and takes to the piano, though, she inexplicably draws the attention of high school hottie Connor (Shawn Ashmore, "X-Men: The Last Stand's" Iceman), the boy Michelle is lusting after. At home, Dot helps pill popping Olivia with dinner while Nina says more mean things about her, but Dot perceives why Olivia is medicating herself - once mom passes out for the night Daddy's Little Girl receives special attention. After Dot stages a commotion to pull pawing Paul away from her former friend, Nina begins to inform Dot that she intends to kill her father and how she plans to do it. And while Cuthbert really makes us feel for her predicament, seesawing between a rebellious front and a damaged interior, her hot and cold treatment of Dot makes little sense. For her part, Belle plays Dot as if she's sleep walking except when she's alternately pushing away from or coming onto Connor. Does anyone in this movie know what they're doing? Falco, who looks like she's been left out in the sun too long, has a knack for slipping into semiconsciousness that may have helped take the sting out of the embarrassment of playing this part (in addition to a pitiable nude scene, she has the misfortune of delivering the film's most risible line). Donovan's all predatory manipulation, giving us nothing to connect with. Nazemian and Schraft's dialogue is often jaw dropping (Nina interrupts Dot's internal monologue to inform her that 'I cut my goldfish in half with scissors') and their final act is ludicrous in every way imaginable. Their closing words? 'When you're invisible, other people can't see you but you can't help but see other people.' Good grief.

Deaf-mute Dot (Camille Belle) lost her mother when only seven and now, in her high school years, has lost her father, too. She is taken in by her godparents, Paul and Olivia (Martin Donovan and Edie Falco), but is disdained by her new stepsister, Nina (Elisha Cuthbert), the popular cheerleader at Dot’s new school. Her new world is a dysfunctional one, at best, and, being deaf, she becomes the confessional for those around her in “The Quiet.” Director Jamie Babbit debuted with the clever 1999 satire, “But I’m a Cheerleader,” before making a career directing TV shows, “The Gilmore Girls” and Nip/Tuck.” After seeing “The Quiet,” I advise Babbit to stick to the small screen or take a Filmmaking 101 class. This has to be one of the worse films I have seen this year and this is for many reasons. One, in particular, is the sordid screenplay by Abdi Nazemian and Micah Schraft that seems to find abuse of the handicapped, father/daughter incest and planned patricide to be dramatically interesting – maybe in the hands of others but not with this team. It is telling that the best thing in “The Quiet” is the bitchy, mean spirited Nina as she repeatedly humiliates Dot but treats the deaf girl as her confidant. Camille Belle is wooden as Dot but I think that this is due to the screenplay and the shallow directing by Babbit. What hurts more is seeing actors like Martin Donovan and Edie Falco cast in a film where they appear there for a paycheck, not the opportunity to act. The rest of the cast is ho-hum. Techs are on a par with the directing, acting and writing and that’s all I have to say about it. The Quiet” is the kind of bad filmmaking that makes me lament that I blew a couple of hours of my life seeing it. I’ll never get that time back. This makes films like the concurrently released “The Last Kiss” seem like high art.