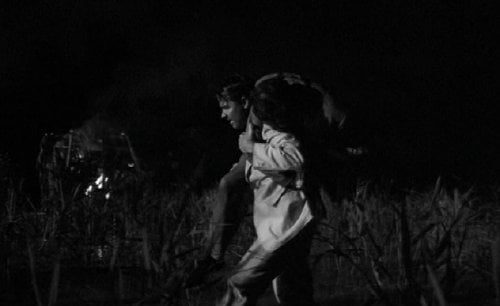 Joseph Mankiewicz directs the first adaptation of Graham Greene’s gripping drama about the last days of the French in then-Indochina as seen through the eyes of a world-weary British reporter and an idealistic young American aid worker. This insightful Cold War drama foreshadowed America’s later involvement in Vietnam and stars Michael Redgrave as the cynical journalist in love with a Eurasian beauty. Most decorated war hero Audie Murphy is the over-zealous innocent who endangers that relationship making this a romantic triangle set in the backdrop of a war torn country in the turmoil of revolution.

Laura gives "The Quiet American" (1958) an A-. This complex love triangle among a British reporter, a French Vietnamese dance hall girl and an idealistic American aid worker at the onset of American involvement in Vietnam was shot on location and was Jean-Luc Godard's pick for best film of its year.

While watching “The Quiet American,” I was primarily struck by how much Greene’s story paralleled the future that would become the Vietnam War. The story is set in 1954 just before the French defeat at Dien Bien Phu as journalist Thomas Fowler (Redgrave) digs for news stories and dallies with beautiful Phuong (Giorgia Moll) while promising her that he will get a divorce. Enter the America (Murphy) an idealist who becomes instantly smitten with Phuong. The younger man taking the lover of an older man is fodder for a romantic triangle drama and Mankiewicz (who wrote the adapted screenplay) does a fine job balancing romance, intrigue and war. This, like many of Mankiewicz’s work, was filmed on location in Indochina.