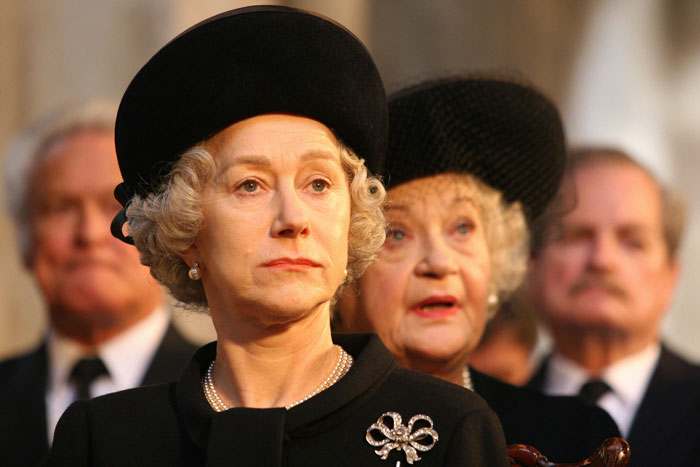 On May 1, 1997 New Labour Party Leader Tony Blair (Michael Sheen, "The Deal," "Underworld: Evolution") was elected in a landslide by an England wanting a shakeup after 18 years of Margaret Thatcher. Blair's 'invitation' to head Elizabeth II's government was frosty, but in August of that year the death of Princess Diana changed everything when Blair stepped up to advise "The Queen." Director Stephen Frears ("The Deal," "Mrs Henderson Presents") and writer Peter Morgan ("The Deal," "The Last King of Scotland") have taken one of the landmark events of our times, the death in a car crash of the Peoples' Princess, Diana, and turned it inside out, providing one of the most unique and startling looks at a monarchy and its government on the threshold of crisis. Helen Mirren's ("Calendar Girls," HBO's "Elizabeth I") brave and humanistic portrayal of a living monarch is a sure lock for an Oscar nomination and the actress has the unusual distinction of portraying two vastly different English queens of the same name in the same year. The rigid formality that defines the Queen's life is almost preposterous and Frears was wise to begin his film by examining it. A nervous Blair and his anti-monarchist wife Cherie (Helen McCrory, "Enduring Love," "Casanova") are given the run down on how to properly meet, address and approach the Queen, an occasion of pinpoint choreography. The Queen's odd habit of standing in her own home (Buckingham Palace) carrying a large, black handbag in the crook of her arm immediately sets a tone of unease and Mirren is adept at providing her impression of her new PM within seconds. She notes his inexperience by recalling that her first PM was Winston Churchill, the implication of shoes too large to fill louder than words, and her flinched removal of her hand from Blair's speaks volumes. She retreats to her embalmed world where dignity reigns and husbands defer to their wives' birthrights while Blair bounds back to a messily modern household of dashed breakfasts with young children and a newly informal 'Call me Tony' Downing Street. Four months later, Blair had had no further encounters with his Queen nor had he had a defining moment. Then, late on the evening of August 31, phones begin to ring in the homes of London politicians and at Balmoral, the Queen's Scottish summer estate. Blair realizes immediately that Diana's death will be immense with worldwide media scrutiny and shocked citizenry, but Elizabeth's reaction is to batten down the hatches, keep things private and protect her grandchildren. Only Charles (Alex Jennings, "Bridget Jones: The Edge of Reason") is seen receiving the news (he gasps), although we hear that Princess Margaret, the Queen's vacationing sister, describes Diana as more annoying in death than in life. Diana's death was to Tony Blair what 9/11 was to George Bush, an event that defined the style of his administration. Charles recognized that what Diana knew - how to reach the common person, how to work the media - was also present in Blair and he tried to ally himself with the new pol by linking them through their shared 'modernism.' Meanwhile, the Queen, who was quick to note that Diana was no longer a royal, was indignant at the brave suggestions coming from Blair, a man in a tight corner if ever there was one, to return to London and address her people. Prince Philip (James Cromwell, "Babe," 2005's "The Longest Yard") becomes obsessed with the idea of landing a 14 point stag seen on their lands and insists 'the boys' would do well in fresh air. The situation continues to escalate for an extremely tense week until Blair must tell the Queen things are so dire than one in four people polled now wanted to end the monarchy. That stag becomes a beautiful metaphor, as well, for both Diana and the Queen herself, both beautiful and regal, but wounded and hunted. The filmmakers' imagining of the Queen's visitation to view the bagged beast is both a parallel private wake and the literal depiction of a country screaming for blood. As brutally funny and exquisitely observed as Frears' film is, though, it is not perfect. Sylvia Syms is badly miscast as the Queen Mum, too loud and florid, and Alex Jennings paints Charles as a reticent fuss budget. Cromwell is terrific, though, all simplistic, ill considered bellowings and ghastly endearments (he calls his wife 'Cabbage'). Watch Cromwell as his eldest son sidles up to him - he enfolds himself, wrapping his arms tightly around his midsection, a wall of body language. Also fine are Roger Allam ("V for Vendetta"), muted and diplomatic as the Queen's private secretary Robin Janvrin and Tim McMullen, boisterous and bragging as Blair's press secretary Alastair Campbell. The film belongs, though, to Sheen and especially Mirren. Sheen should not be overlooked in this pivotal role. He vaguely resembles Blair and takes the character from boyish awe and astonishment ('Someone needs to save these people from themselves!') through to a deeper loyalty. Mirren is note perfect, putting up a formidable exterior yet finding the center that craves the love of her people if not her own children. The film's two most breathtaking scenes both find her with tears in her eyes - once when she recognizes the magnificence of the stag in the wild and shoos it from the encroaching stalkers and later, when at the flower strewn gates of Buckingham Palace a child rebuffs her offer to place a bouquet for Diana because it was brought for her. 'At the end of the day all Labor Ministers go gaga for their queen,' Blair's wife Cherie observes wryly and indeed, the eager PM is accepted on a leveler playing field when he next visits the Palace. But the Queen is no pushover. Just as she admits to him the hurt caused by her sudden lack of favor, she strengthens as she warns that the same will befall him.