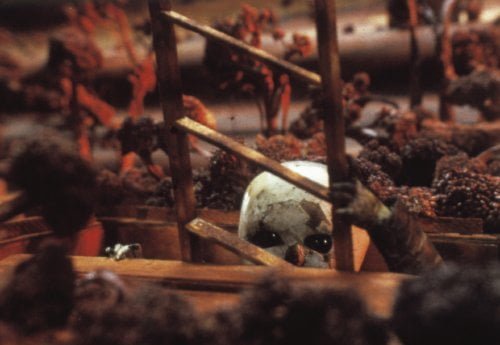 Stephen and Timothy Quay are twin American filmmakers whose specialty has been, for decades, their ground-breaking and surreal stop motion animation. Film curator Christopher Nolan assembles 15 of the brothers’ works, some internationally acclaimed, in “The Quay Brothers: Collected Short Films on blu-ray.”

Identical twins from PA who've lived in London since their early 20's and sound vaguely like Werner Herzog, Stephen and Timothy Quay are artists most well known for their stop motion animated short films. Long time fan Christopher Nolan has made a short documentary of the brothers at work in their warehouse and curated a 35mm retrospective of their films which toured the country. Now his production company Syncopy has partnered with Zeitgeist Films to release "The Quay Brothers: Collected Short Films" on blu ray. This release, which features visually crisp transfers, includes sixteen of the brothers' films, more than accompanied the road show and three which have never been released on home video (Nolan's 8 minute documentary is also included). The package is just beautiful. A slipcase holds a trifold blu ray holder with the films listed on the back and a twenty-eight page booklet inserted inside. The booklet features a personal introduction by Nolan, Michael Brooke's Quay 'dictionary' listing all their influences (where we learn Polish animator Walerian Borowczyk was more of an influence than Czech Jan Svankmajer, whose work they discovered after they'd begun their own) and the essay 'The Decaying Warehouse of Fears and Forgetfulness' by Michael Atkinson. The films, influenced by middle European writers and composers, museums of the bizarre and asylums, are far from literal adaptations, wondrous in their dreamlike, sometimes nightmarish, worlds. The most well known is "Street of Crocodiles" from 1986 in which an untethered marionette goes exploring. It is one of six to include the Quays' commentary, illuminating their objectives, methods and obstacles. All of their films repurpose objects from times gone by, not only old dolls but the map pins that dance about "The Cabinet of Jan Svankmajer" or the cricket in a box of "The Unnameable Little Broom (or the Epic of Gilgamesh)." The latter, one of their color films, features a despot that no doubt influenced "Saw's" Jigsaw, just one of many influences on others one can find in the Quays' films. In Stille Nacht I Dramolet, metal shavings move about as if by magnet, reminiscent of the old Wooly Willy toy. There are two films made for His Name Is Alive, one featuring a doll playing ping pong with a stuffed rabbit. In Absentia is based on the life of a real woman, Emma Hauck, who obsessively wrote letters to her husband from the psychiatric institute where she spent the last years of her life at the turn of the 20th century. The Quays turn it into a study of light. One of their more recent films, their first made in the U.S., is "Through the Weeping Glass on the Consolations of Life Everlasting (Limbos & Afterbreezes in the Mutter Museum)," is a live action stop motion featuring antique medical anatomies and oddities like the death cast of Chang and Eng. There is much to explore here (the disc has a total running time of 225 minutes). The package will be released on 11/24/2015 and would make a great gift for the cinephile on your list. Grade:

If you are the kind of film nut who likes such animators as Jan Svankmajer, a bizarrely creative animation artist that, I must say, is an acquired taste – one that I can appreciate but never quite developed - this package is for you. The Quay Brothers are cut from similar (though not the same) cloth. Their stop motion photography, especially in their earlier films, has an eerie, often ethereal and cosmic, feel that is, for me, like watching a car wreck – I could not take my eyes off of the screen even though I wanted to. (I react the same way, but more so, to Svankmajer’s oeuvre.) Watching “The Quay Brothers: Collected Short Films on blu-ray” is like studying Extreme Emersion, the fanatic’s guide for swimmers – you have to be serious about your love for film when you take on the Quay boys and let them envelop you. The collection of the Quay Brothers short works spans two decades of filmmaking and it is an evolutionary study of their style and vision. There is a pervading dark, often sinister, quality to their works, such as “The Cabinet of Jan Svankmajer,” their 1984 homage to the creator of “Little Otik” and other surreal stop-motion animation films I cannot say that I “like” “The Quay Brothers: Collected Short Films,” but as a film lover I try to keep an open mind for the avant-garde. The collection, if you are not familiar with these unique animation filmmakers, is a crash course for the uninitiated. Six of the films are narrated by the brothers, giving a unique analysis of their work as it unfolds before you. I appreciate their vision; it is just not mine quite yet, maybe later.