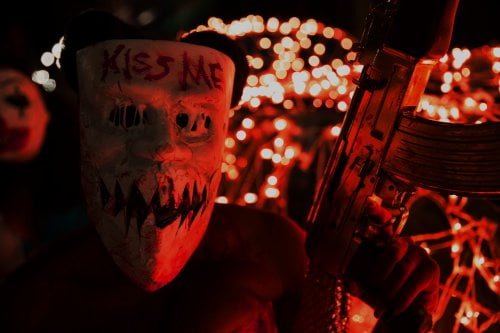 Two years after Leo Barnes (Frank Grillo) regained his humanity on purge night, he's become head of security for presidential candidate Senator Charlie Roan (Elizabeth Mitchell, TV's 'Lost'), an anti-purger. But the NFFA (New Founding Fathers of America) have eliminated protection for elected officials on Purge Night so they can legally assassinate her and Charlie and Leo find themselves out onto the streets to literally fight for what they stand for in "The Purge: Election Year."

Series writer/director James DeMonaco's trilogy capper is the best of the bunch, exploitative drive-in fare sure to incite audiences by capitalizing on the current political zeitgeist. The scariest thing about it is how many might relate to the NFFA, portrayed as the elite religious right spewing purge rhetoric to rationalize extermination of the poor and the murderous hooligans they enable ('The Purge is Halloween for adults!') In a prologue, we see a blood-splattered, bound and gagged family being forced to listen to a purger's mix tape (T Rex's '20th Century Boy' and George Clinton's 'We Got the Funk'), before declaring 'Mommie's choice!' Eighteen years later, the family's soul survivor is Roan, a candidate anguished over her country's loss of its soul. The USA has now even become a 'murder tourism' destination, South Africans and Russians spilling in to vent their impulses. Then we meet Joe (Mykelti Williamson, "Forrest Gump"), a deli owner embroiled with an entitled shoplifter (Brittany Mirabile). Laney (Betty Gabriel, "Experimenter") steps in and the girl is awed by the infamous purger. But Laney was turned around years ago by Joe and now drives a triage van on Purge night. Then Joe learns his insurance has just been upped by several thousand dollars he cannot pay the day before the Purge. He will stay and protect his store himself he says, against Laney's impassioned argument. His lone employee Marcos (Joseph Julian Soria, "Crank: High Voltage"), a Mexican immigrant given a chance by Joe, will stay with him. In parallel, Roan has decided to stay in her own home just as her supporters must, also against the judgement of a friend, in this case Leo. When the NFFA's heavily armored team arrives, Leo gets them out, but he's shot in the shoulder and they're followed by drones. Just as they're surrounded by tourists dressed as Uncle Sam, Lady Liberty and American revolutionaries, along comes Laney. They'll converge at Joe's after Laney receives a distress call, the teenaged shoplifter having returned in high style with a group of friends bearing weapons and circular saws. After being trailed by armored trucks and a helicopter piloted by team leader Earl (Terry Serpico), Laney retreats to the underground complex run by activist Dante Bishop ("The Purge's" desperate stranger), setting up a moral conundrum once Roan learns of his plans. DeMonaco's cleverly playing to two different audiences here, those who will by horrified by his political satire and those who will come for the gore and violence. Purge Night has reached new levels of depravity, with guillotines set up on the streets and screaming victims mounted on automobile hoods. Set in D.C. but shot in Rhode Island, we are treated to sights like the Lincoln Monument, its steps littered with bodies, its columns spray painted 'P-U-R-G-E' in dripping red, a symbol of a country that has lost its way. The production has the overly grainy murk of an exploitation film, and DeMonaco's conflicts sometimes lack logic, but he's generally configured his action well and the plotting neatly dovetails into a killer of a climax featuring a mad priest who could be the cousin of "The Da Vinci Code's" albino killer monk. As the NFFA's candidate Minister Owens, Kyle Secor (TV's 'Homicide: Life on the Street') spits venomous party lines like a cross between a right wing suit and a killer cult evangelist. Grillo is a gritty avenger, but the movie's soul belongs to Williamson. As the punk who wants her candy bar, Mirabile is chilling. Costumer Elisabeth Vastola's ("We Are What We Are") inventive contributions are exceptional. Grade: