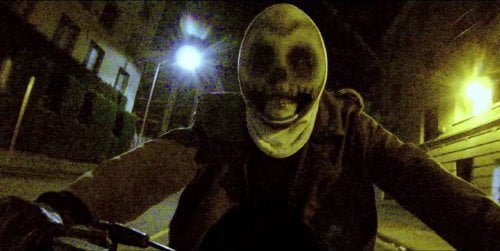 After witnessing the Sandin family under siege within their well secured home for 2022's purge, writer/director James DeMonaco takes us to the streets where a cop who's lost his son, a mother and daughter and a couple on the verge of a breakup must withstand bloodthirsty assailants of "The Purge: Anarchy."

"The Purge" was a bad movie that became a surprising hit, its concept of a 12-hour yearly purge where any crime is admissable having cut down on crime the draw. With his sequel, writer/director James DeMonaco switches his point of view from the Haves to the Have-Nots and those unfortunate to be caught out with them, the class warfare of the first film now more out in the open, the New Founding Fathers of the U.S. Government being challenged by radical activist Carmelo's (Michael K. Williams, HBO's 'Boardwalk Empire') online Call to Arms videos. It's still not a great movie, but its drive-in aesthetics recall such films as "Escape From New York," "The Most Dangerous Game" elements of the first film magnified in a climactic bit of satire that's a memorable set piece. We don't see anyone proclaiming their patriotism with blue flowers this time around. We're in a downtrodden urban area now, where diner waitress Eva Sanchez (Carmen Ejogo, "Away We Go") and her coworkers fret awaiting their boss to release them in time to secure themselves for the night's 'festivities,' 'Stay Safe' has become the holiday greeting. The attractive Eva must fend off unwanted males offering protection, including drunk neighbor Diego (Noel Gugliemi, "Training Day"). At home, her father (John Beasley, TV's 'Everwood'), clearly distressed by the event, says not to call him for supper, he's going to his room. Looks like the stage is being set for suicide (which neither Eva nor her forceful daughter Cali (Zoë Soul, "Prisoners") pick up on), but the reality's far worse (think Johnny Depp's little seen film "The Brave"). No sooner have they absorbed what's happened than Diego blasts his way in, intent on his own entitled thoughts of rape and murder, but armed forces in riot gear follow, pulling the two women out into the street for Big Daddy (Jack Conley, "L.A. Confidential"), a man with a mounted automatic weapon being driven around in a transport truck executing his own purge. In another part of town, Shane (Zach Gilford, TV's 'Friday Night Lights') and Liz (Gilford's wife, Kiele Sanchez) have stopped for groceries on the way to his sister's house and they're arguing about whether to tell her they're separating. A gang of black youths painted like ghouls led by a masked guy with 'God' written on his forehead intimidate, shoving Shane then backing off. On the bridge into the city they realize he tampered with their car and as the sun goes down, the thugs drive up. Then there's Leo (Frank Grillo, "Captain America: Winter Soldier"), who's taken leave of his wife heavily armed intent on a mysterious mission. Against his better judgement, Leo stops to save Eva and Cali on the street and piling back into his car, they find a terrified Shane and Liz hiding in the back seat. But the firefight has disabled his armored vehicle as well and the five find themselves out in the street. Despite his theme of income inequality, DeMonaco has an alarming tendency to stereotype the very minorities whose side he appears to be on. Eva promises Leo a car if he can get the group to her friend's house, but what goes down at Tanya's (Justina Machado, "The Call") takes the 'hot headed Latin' to ludicrous extremes. The creepy thugs following Shane and Liz are feeding the mouth that bites them, like some twisted form of drug dealing. Leo's mission is all too easy to figure out, its resolution a weak attempt at offering hope for the species. But damn if the last place these five find themselves in isn't a wicked bit of over the top social commentary, sold by a campy performance from soap actress Judith McConnell as an aging society nightmare in evening wear and the reason for Eva and Cali's targeting may provide a chill. The film's digital photography is ugly, interior lighting plummeting us into Ejogo's pores and yet the dingy, grainy nighttime exteriors suit the subject matter. The acting ensemble won't be looking to win any awards, but "The Purge: Anarchy" works as the B-side of a drive-in double feature.