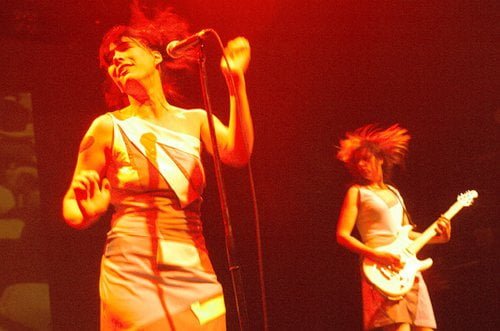 In her early twenties, Kathleen Hanna was performing Spoken Word in Washington. She talked to a female writer she admired, wanting to express herself more, and was advised to start a band. Shortly thereafter, Hanna formed Bikini Kills with Kathi Wilcox, Tobi Vail and Billy Karren and used her unique charisma to champion feminist ideas as "The Punk Singer."

The punk/new wave era of the late 70's and early 80's was my music scene, so by the time Bikini Kills came around in the 90's I no longer had my ear to the ground. Sure, I'd heard of them, but "The Punk Singer" really brought home just what I'd missed. Director Sini Anderson shapes her documentary on the incredible Hanna as a bit of a mystery - why had this woman who had been so loved (and hated), so influential and so creative stopped performing in 2005? Anderson uses an abundance of archival footage to document Hanna's career from those early Spoken Word performances right up through a December 2010 Kathleen Hanna Tribute show at NYC's Knitting Factory. A funky interview setting that looks like the back of a taxicab done up with red plaid blankets and Christmas lights has a series of visitors including Sonic Youth's Kim Gordon, Joan Jett and and Sleater-Kinney's Corin Tucker (Carrie Brownstein also appears sitting at an outdoor cafe), all talking about how important Hanna was, not only to music but to the riot grrrl feminist movement. Hanna herself appears in several different settings to provide context and, in keeping with her industrious career we learn that when her boundary pushing work as a college photography major was banned at the school, she and some friends opened their own gallery. There's no keeping this woman down. Performing at clubs where mosh pits ruled, Hanna insisted that men move to the back to allow woman to see her shows in front, safely, and her force of personality was such that it actually happened. Bikini Kills's lead may have used her sexuality as part of her performance, but when the media started playing up her problematic childhood, she wanted no part of it, and simply refused to give interviews or cooperate, a tactic which worked in her favor (she states for the record that she was never raped by her father, a constant journalistic refrain, although he was 'sexually inappropriate.') A punch from Courtney Love offstage at Lollapalooza started the frenzy again, but although Hanna was disappointed that the incident had to happen, she would not participate in a public cat fight. Hanna continued to remain true to her heart when she fell in love with Adam Horovitz, despite some misogynistic Beastie Boys lyrics (they married in 2006 and Horovitz is the picture of a supportive mate). We're treated to so many vintage performances of such songs as "Rebel Girl" and "Feels Blind" before Bikini Kill breaks up. Hanna always needs an outlet however, and when Johanna Fateman handed her a fanzine in New York, Hanna tracked her down and announced they'd be forming a band. With JD Samson, the dance-punk group Le Tigre was born and more great music ensues (in between bands, Hanna produced the solo Julie Ruin album with a drum machine in her bedroom). But touring began to take a toll on her health and Hanna announced she was done, having said everything she wanted to. This was a cover for a more difficult reality, one which accounts for the years leading up to 2010, when Hanna bursts forth once more, capping her own tribute show with her new band The Julie Ruin (which includes original Bikini Kills member Kathi Wilcox). "The Punk Singer" chronicles the life-so-far of one amazing activist/artist. Even if you don't enjoy the music, it will be hard not to come away from this celebratory work without admiration for a woman who keeps climbing back, a creative force to be reckoned with.