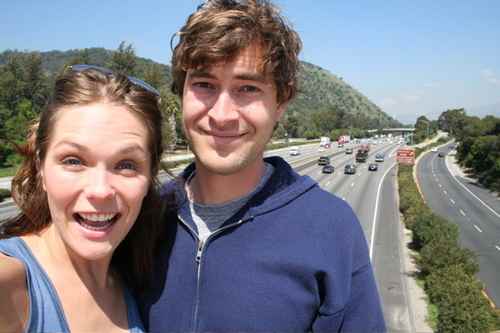 Josh (Mark Duplass, a lookalike for "The Office's" John Krasinski) has a double agenda for a long road trip - pick up a birthday gift for his father he snagged on eBay and spend some quality time with his girlfriend Emily (Kathryn Aselton) along the way. When his brother Rhett (Rhett Wilkins) horns in on the journey, the dynamic changes and Josh and Emily's relationship goes under a microscope as they travel to pick up "The Puffy Chair."

This may be the first time a MacGuffin has been the focus of a movie's ad campaign. "The Puffy Chair," written by the film's star and directed by his brother Jay, is a little gem, an independent film that takes a conventions like the road trip and makes it fresh. The pressure is on for the Duplass brothers to see what they come up with next. When laid back Josh asks Emily if she's mad that his brother will be joining them, she says that no, she's not mad, she's 'disappointed.' This is a couple that seems like a natural, truly wishing to please one another, and yet... Josh's budget constraints put them in hot water with a motel owner on their very first night on the road and Rhett's crazy ways are simply recognized by his brother while they astonish and mortify Emily. Emily's critiques of Rhett, who found Amber (Kim Catrall lookalike Julie Fischer) on the road, married her, then announced a split twelve hours later, are transparently directed at her own relationship misgivings and Josh is dismayed when she fails to find the romance in a song he's written for her. And then there's the chair which looks more like a fire sale item than like its eBay listing. The Puffy Chair becomes the object of Josh's frustrations. The trio eventually do make their way to dear old dad's and he turns out to have some of the most plain spoken advice I've had the pleasure of hearing a father give to his son. With "The Puffy Chair," the Duplass brothers have achieved the naturalism of Andrew Bujalski's "Funny Ha Ha" twentysomethings and the quirkiness of Tom DiCillo's road trip, "Box of Moonlight" all wrapped in a technically impressive package.