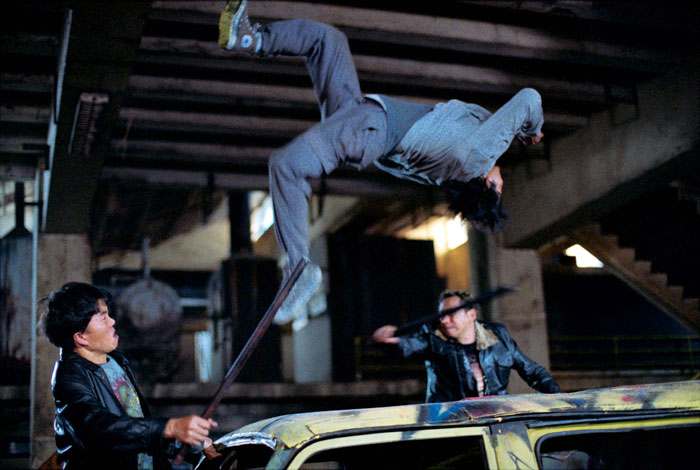 When Thai martial artist Kham's (Tony Jaa, "Ong-Bak: The Thai Warrior") elephant is stolen by an evil Asian gang, he travels to Australia to retrieve the sacred beast as "The Protector."

Director Prachya Pinkaew ("Ong-Bak: The Thai Warrior") reportedly cut 20-40 minutes from his film under a film festival deadline and this is the cut being released in the U.S. The film suffers from choppiness and pacing, with threads of the Sydney based crime conspiracy popping in and out seemingly randomly. Then there's the film stock that looks like it's been through a various variety of time and tampering mistreatment. And yet, Pinkaew delivers some terrific action set pieces studded with visual puns and the incredibility physicality of Bruce Lee successor Tony Jaa. In a stylish, monochromatic CGI piece, we're give then history of 'the protectors,' warriors who guarded the royal elephants atop of which Thai kings pitched battle. Kham's father (Sotorn Rungruaeng) is a symbolic link to this breed and Kham spends his childhood blissfully with the elephant family his father raises in the countryside (Pinkaew includes a wonderfully silly elephant courtship in which an adult pair retire into the woods and a baby emerges some time later). Kham learns that there is still a role for the protector in the modern world when a band of poachers try to steal his baby elephant Korn (played by elephants Yoyo and Singha) and kill the toddler's mother in their flight. His life changes forever, though, when he and his father take Korn and his father, Por Yai (Sambat the Elephant), to the King's palace and the same ugly band steal Por Yai and Korn after killing Kham's beloved dad. Kham is tipped off to the whereabouts of this crime gang and enters the midst of their lair with nothing but his physical ability. That proves enough to fell most of the group and get the identity of Johnny (Johnny Tri Nguyen, "Cradle 2 the Grave"), the member who's abducted his elephants and taken them to Sydney. When Kham, who speaks no English, arrives in the West (and has a humorous run in with a Jackie Chan impersonator in Sydney's airport), his luck turns crazy when the gypsy cab he gets into turns out to be stolen, he's arrested, but the arresting officer (David Chatchavan Asavanod) is a renegade Thai cop. It's here that things turn a little dicey with plot points lifted from films as varied as "The Freshman" (an endangered species eating club) to "Kill Bill, Vol. I's" O-Ren Ishii and her Crazy Eighty-Eights. There is a corrupt Sydney police lieutenant in cahoots with Johnny's boss, Madame Rose (Xing Jing), who seems to alternately hold sway over the entire city and yet remain undetected within the Sydney police force - just how is never quite made clear, even after Officer Rick (Asavanod) is set up as the unlikely murderer of Sydney's police chief. But what really matters here are two things - the stunts and the wonderful animals. Pinkaew's first big set piece is a terrific Thailand boat chase where he up ends cliche's like the fruit stand crash and pokes fun with a billboard. Jaa gets to show more of his own stuff fighting off Johnny's gangs who come in waves on skateboards and dirt bikes. There's an uninterrupted four minute fight sequence where Jaa fights his way up a spirally four story concourse and a battle with an intimidating Capoeira Fighter (Lateef Crowder) and Australian giant (strongman Nathan B. Jones, "Troy") in a Buddhist Temple engulfed in fire and water. Jaa's skills are amazing (watch him walk up a glass wall, his sneaker squeaks marking every step), although the Muay Thai maestro still lacks the charisma of a star like Chan. Still, his sensitivity and passion for the animals and downtrodden of his country come through strongly. Pinkaew's also got the talent, but needs to rein in his tendency to let his fight scenes carry on too long and the excess of his bone crunching sound effects border on the comical. "The Protector" is often cheesy, but always entertaining, unabashed B movie fun.