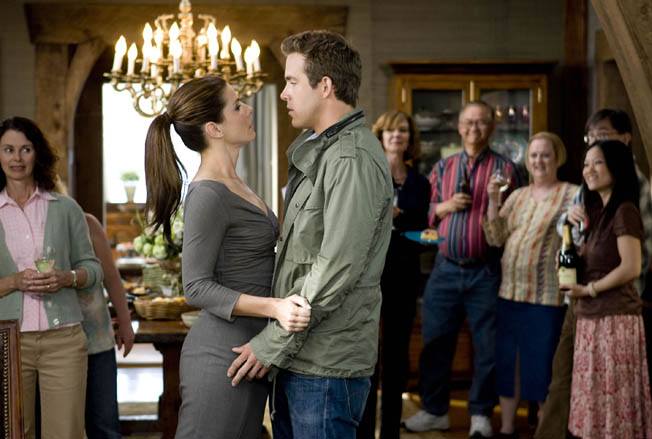 Andrew Paxten (Ryan Reynolds, "Definitely, Maybe," "X-Men Origins: Wolverine") is so good at his job he orders the same cinnamon soy latte his boss drinks in the morning in case hers should get spilled and texts the whole office when 'it' is arriving so they can hop to. But when uber-editor Margaret Tate (Sandra Bullock, "The Lake House," "Premonition") discovers that her impatience with a Visa application when attending the Frankfurt Book Fair will result in deportation and her job going to the guy she just fired, she informs her boss that she is marrying her assistant. Andrew turns tables, extorting her to promote him and attend his Grandma Annie's (Betty White, TV's "The Golden Girls," "Lake Placid") 90th birthday in his Alaskan home town for "The Proposal."

"The Proposal" may not be the worst romantic comedy ever made, but it surely is one of the most unnecessary. As written by first timer Pete Chiarelli and directed by Anne "27 Dresses" Fletcher, the film plays like a patchwork of everything from "Men in Trees" to "Chuck and Larry." There's exactly one (running) gag that is actually laugh worthy, embodied by "The Office's" Oscar Nuñez as Siska, Alaska's chief cook and bottle washer, but even that bit's ripped off from "Local Hero" (the film that keeps on giving). So, the guy that loathes his boss agrees to marry her and takes her to Alaska where she is a fish out of water because a) she is a cold city person and b) she arrives in Christian Laboutin heels. She reacts badly to an adorable puppy and is told to be careful not to let him out lest an eagle gets him, so we know where that one will go. The couple is forced to kiss at a family gathering and we see the first signs of melt. Margaret is abducted by mom-in-law to be (Mary Steenburgen, "Four Christmases," "Step Brothers") and 'Gammy' and Andrew's gorgeous ex Gertrude (Malin Akerman, "27 Dresses," "Watchmen") for some female bonding. Upon their return, she witnesses strain in Andrew's relationship with his father (Craig T. Nelson, TV's "Coach," "Blades of Glory") and tries to talk to him about it, she shares embarrassing anecdotes about her own past. More melt. Oh yeah, the Paxten's are hugely wealthy, although Margaret did not know that. And what about the infamous first Bullock nude scene, you ask? It's a come on - she's either obscured by steam in the reflection of a mirror or the naughty bits are covered. And in order to throw a wrench into the wedding, as is always scripted in these films, dad finds out about Margaret's immigration problem and flies the officer who was keeping tabs on the upcoming nuptials, Mr. Gilbertson (Denis O'Hare, "Stephanie Daley," "Duplicity"), to the festivities. For maybe a minute, one could entertain some "My Best Friend's Wedding" barreling our way, but that would actually be too original. Bullock makes so many lousy movies it's depressing. This isn't like the rut Will Ferrell is in because he's never shown himself capable of more than the bit he's been recycling, but Sandra has been excellent in dramas like "Crash" and "Infamous," where I thought her Harper Lee bested indie darling Catherine Keener's. She's been funny in things like "Demolition Man" and effective in romantic comedies like "Two Weeks Notice." But too often she gets attached to subpar material like this (and "Miss Congeniality" and "Two if by Sea" and "Divine Secrets of the Ya-Ya Sisterhood" and....). She's still attractive at 44 (to her costar's 32, an age difference only alluded to by Grandma Annie's character) and likeable, but all she does with this character is relax her smile over the course of 107 minutes and do a few pratfalls. Reynolds is still on his way up, but he had much more to glom on to, Bullock's nude body excepted, in "Definitely, Maybe" than he does here. There is not enough of a change, or a background *to* change, in either of these characters' arcs. There is no one else of interest in these goings on. Betty White's eccentric granny schtick is growing thin (Native American Indian chanting in the woods? Really?). If the film's locations look less like a small Alaskan town than they did in TV's "Men in Trees," that's because the picturesque fishing village and town of Rockport and Gloucester, Massachusetts are standing in for Siska, with snow-capped mountains matted in the background. There is as much pleasure to be had in the marketing art used for the poster of "The Proposal" as in the entire movie. Take two likeable, good-looking actors and hope that they float. Maybe if Katherine Heigl and Patrick Dempsey had been cast, I would have expected less and enjoyed it more.