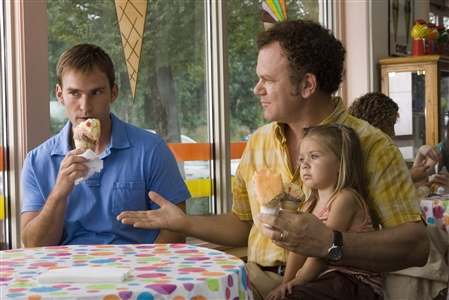 Doug (Seann William Scott, "American Pie," "Old School") is assistant manager at one of Chicago's Donaldson’s supermarkets who believes his career is fast-tracking. Until, that is, a new Canadian employee, the fiercely ambitious Richard (John C. Reilly, "Chicago," "Walk Hard: The Dewey Cox Story"), a former drug addict and motorcycle gang member, arrives to challenge Doug's right to "The Promotion."

Screenwriter Steve Conrad has made a career writing about men having career crises - Nicolas Cage's downtrodden "Weather Man" and out of work Will Smith struggling with "The Pursuit of Happyness." In his directorial debut, Conrad doubles up for half the returns. Trailers for "The Promotion" make it look like a slapsticky, escalating oneupmanship war between Scott and Reilly, but it's not. Nor is it a buddy movie. It's not exactly a comedy but one could not call it a drama either. And Scott's lead character ends up right where he started off while Reilly's is a bundle of contradiction. "The Promotion" needs some career counseling to figure out just what it really wants to be. Overusing voice over, we learn from Doug that customer service at an urban supermarket chain is no walk in the park, but, as he tells wife Jen (Jenna Fischer, TV's "The Office"), he's the 'lead shoo-in' for the manager's position at the chain's new location. Doug's manager Scott (SNL's Fred Armisen) encourages this notion. Until, that is, a Canadian, Richard, is transferred from a Quebec sister store. Doug begins to passively aggressively undermine Richard, but Richard takes things a step further. And yet, the two also have heart to hearts and shore each other up when the chips are down. Just not when 'the Board,' a quintet of unblinking executives led by the humorless Mitch (Gil Bellows, TV's "Ally McBeal," "The Weather Man"), is in store. It's difficult to have a routing interest in the competition because Doug is so clearly the right guy for the job. He's earnest and really wants to make a better life for his wife (they live next door to a gay banjo playing pair who have frequent sex behind paper thin walls) and stand taller in her eyes (she's a nurse who works for a life saving surgeon (Bobby Cannavale, "The Station Agent")). Richard, on the other hand, is a loser dependent on self help motivational tapes and the love of his Scottish Christian Missionary wife Laurie (Lili Taylor, "I Shot Andy Warhol," "Starting Out in the Evening"). He preaches honesty, yet lies, but is a nice enough guy in his own way. There's also little rhyme or reason to the hiring practices at Donaldson’s - when Richard decides to file an 'in store' against Doug, greatly exaggerating the 'Tater Tot incident,' Manager Scott, who rarely emotes, appears vaguely horrified, warning Richard that the complaint will be seen company wide. Yet it's never brought up again. Doug turns a potential community relations disaster into a plus, then Richard thoroughly sticks his foot in it. He's considered a non-entity by the Board, yet when Doug decides to be a do-gooder and correct the misunderstanding of an entirely different, lesser situation, Mitch suddenly considers the two candidates on equal footing. We're given little insight into the workplace itself, other than to be told a relationship with the Pepsi placement rep is a desirable thing and that loitering teenage punks are a major nuisance. The store's other employees remain mostly nameless and Hispanic and consist of a really fat guy who uses store products (deodorant, soda, shaving cream) on the sly and the group who encourage the gringo to ask a female clerk something really embarrassing in Spanish. A running gag about Doug sharing the name of a Junior Olympian is a head-scratcher. Conrad may have some interesting things to say about the male condition, but he is unable to articulate them as a director. About the best thing that can be said about "The Promotion is that it's amiably misguided.