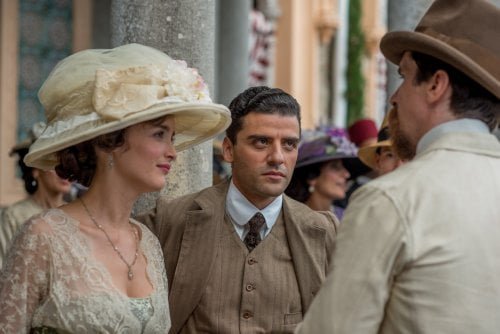 Mikael Bogosian (Oscar Isaac) leaves his small village in the south of Turkey for bustling Constantinople, where he hopes to become a doctor and bring medical care to his people. But, it is 1914 and war is threatening to engulf Europe and the Ottoman Empire is in its final days of collapse. The shaky Turkish government decides that ethnic Armenians are the real threat to the country and a pogrom of death and destruction begins in “The Promise.”

In 1914 Siroun, Turkey, Mikael Pogosian (Oscar Isaac) dreams of expanding the services of the apothecary run by his parents. He becomes engaged to Maral (Angela Sarafyan, HBO's 'Westworld'), whose dowry will enable him to attend medical school in Constantinopole. Staying with his well-to-do uncle, Mikael meets the beautiful Ana (Charlotte Le Bon, "The Walk"). He is smitten, but until they are thrown together in an outbreak of Turkish violence, he respects her relationship with American journalist Chris Myers (Christian Bale) and his own responsibility to "The Promise." The passion project of former MGM head Kirk Kerkorian, who died as the film went into production, was always a risk, a financial gamble sure to enrage the Turkish government who long denied the Armenian genocide (the film's backers have pointed to its low IMDB score, amassed from 27 times more people who could have possibly seen the film at the time). It is a story that has been all but ignored cinematically (there are a few exceptions, Atom Egoyan's 2002 film-within-a-film "Ararat" probably the most well known). Unfortunately, as brought to the screen by cowriter (with Robin Swicord)/director Terry George ("Hotel Rwanda"), that may still be the case. Its fictional love triangle characters may add geographical scope, but the film is a Europudding which never articulates why the Turks wished to obliterate the Armenians in the first place. The film is worthwhile to understand the horrors faced by an entire race during WWI, something that was extensively reported in the U.S. Mikael endures endless tragedies, including the loss of his entire village (save his mother Marta, played by Iranian-American actress Shohreh Aghdashloo) and the Turk (Dutch-Tunisian actor Marwan Kenzari, 2016's "Ben-Hur") who stood up to his father to befriend him. Casting is frequently the problem here, Kewpie doll French Canadian actress Le Bon an odd choice indeed for the committed Armenian she portrays here. Big names pop up distractingly in what amount to cameos (Look, there's James Crowwell as the American Ambassador! Is that Tom Hollander as an imprisoned Armenian clown? Rade Serbedzija flashes by as the Mayor of Basak. Jean Reno looks stern as a French Naval Captain.) George's climax emphasizes romantic loss over national tragedy before an uplifting Watertown, Massachusetts conclusion. My home town is indeed the third largest Armenian population in the United States, but it never, ever looked like this. Grade:

The Armenian genocide (which occurred or did not, depending on opinion – occurred, in my opinion) is the backdrop for this story of a love triangle amidst the turmoil of war. Mikael meets beautiful, cosmopolitan fellow Armenian, Ana (Charlotte Le Bon), newly arrived in Constantinople from Paris on her way to her father’s funeral. Her travelling companion, Chris Meyers (Christian Bale), is a hotshot American photojournalist there to cover the fall of the Ottomans , but also to be with Ana. The obvious love triangle that develops is carried through the film. But, it is just the backdrop for the real message of “The Promise.” The filmmakers wear their hearts on their sleeves as they use the canvas of cinema to bring home the horror of the Armenian genocide - an act, to this day, denied by the Turkish government. The horrors of that mass murder of innocents is shown in microcosm as Mikael, Ana and Chris put aside their romantic conflicts for the better good and save Mikael’s village. The actors do a solid job but, as I said, the story is really to bring to light, with visual impact, the long buried inhuman genocide of hundreds of thousands, if not millions, of people whose “crime” was living in peace with their neighbors – until that peace came to a crashing end at the hands of despots. It is a story that should be known and “The Promise” does a solid, credible job in telling it.