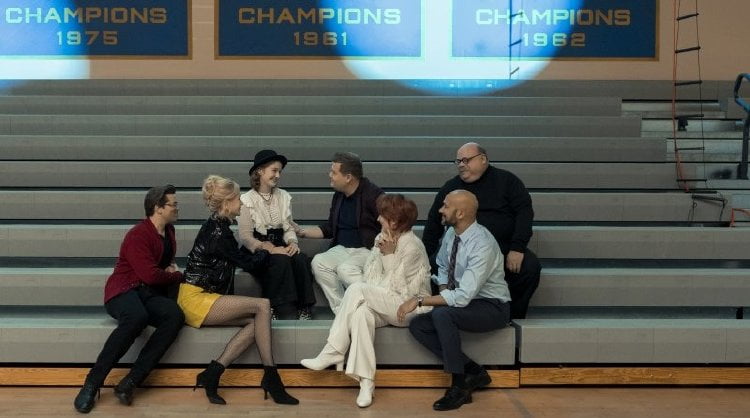 Dee Dee Allen (Meryl Streep) and Barry Glickman (James Corden) are Broadway stars with oversized egos to match, so when their latest musical about Eleanor Roosevelt and FDR is brutally panned by the New York Times, Sardi’s bartender Trent Oliver (Andrew Rannells) suggests they need a brand overhaul to address their obnoxious reputations.  And voila!  Chorus girl Angie Dickinson (Nicole Kidman) finds them a cause on Twitter.  Emma Nolan’s (newcomer Jo Ellen Pellman) desire to publicly acknowledge her girlfriend has resulted in the head of her Indiana high school’s PTA, Mrs. Greene (Kerry Washington), to cancel “The Prom.”

Director Ryan Murphy says he was drawn to this musical, adapted by its playwrights Bob Martin and Chad Beguelin, because being from Indiana, he recognized himself in its gay protagonist.  But there’s clearly more to it than that considering that “The Prom” plays like 3 seasons of his TV series ‘Glee’ stuffed into two hours without its music rights, the generic originals here occasionally goosed with clever lyrics.  Thankfully Murphy’s cast Streep as his lead and she has so much fun playing the self-centered diva it’s almost impossible to resist her.

At James Madison High (a weird presidential connection to its Broadway counterpart), Emma finds an ally in high school principal Tom (Keegan-Michael Key), willing to go to bat for her on legal grounds, even as her girlfriend Alyssa (Ariana DeBose) shrinks into the shadows, almost relieved she won’t have to come out to her mom (Alyssa’s last name?  Greene).  When the Broadway brigade busts into a school-wide meeting, they make waves (Streep’s rendition of ‘It’s Not About Me’ is one the few musical highlights), but the strength of the tide pulls their feet out from under them, Greene’s solution to the resultant all inclusive prom more hurtful than its cancellation.  It will take not one, but two selfless acts from Dee Dee, her romantic interest in Principal Tom igniting a major change of heart, to turn everything around.

The film begins with hyperactive camerawork from Matthew Libatique, a synthetic Broadway and ugly costumes from Lou Eyrich, who never met a sequin he didn’t like, before settling down in the Midwest (where, ironically, costumes are much improved).  There is some amusement to be found as the bright lights contingent checks into a chain hotel and later on during Barry and Dee Dee’s late night chat, but this musical is overstuffed with added side plots including Barry’s reconciliation with his Ohio based parents and Dee Dee’s former marriage.  Rannells’ shopping mall set ‘Love They Neighbor’ song and dance number feels lifted from the comically straight Up with People organization.  Nicole Kidman is mere background until she steps out for some mentoring with ersatz Bob Fosse moves, the camera oddly more focused on her hands than her feet.

Pellman, who resembles a more grounded Drew Barrymore, is a charming lead, more than capable of holding her own with Hollywood legends.  Streep’s singing voice, which used to seem like a passable bonus talent from an overly gifted woman, has gotten stronger, the actress belting out her solos with gusto, Key a well matched romantic foil.  The leggy Logan Riley stands out as the representative mean girl who has a change of heart.  The film also stars the always welcome Mary Kay Place as Emma’s grandmother and Tracey Ullman as Barry’s mother.

Group dance numbers are so brimming with energetic precision they seem the product of an unrelenting task master, as if choreographed by David Fincher.  “The Prom” is the movie equivalent of jazz hands, an overly eager to please entertainment.

Indiana, present day. The head of the PTA at the local high school has banned Emma (Jo Ellen Pellman) from attending the prom because she is a lesbian. Cut to Broadway, NYC, and diva Dee Dee Allen (Meryl Streep) and her co-star Barry Glickman (James Corden) face the disastrous same-day open and close of their musical “Eleanor.” The duo see Emma’s plight as the means to rejuvenate their failed careers in “The Prom.”

OK, I do not like musicals. There are exceptions, of course, like Bob Fosse’s “All That Jazz,” Lin Miranda’s “Hamilton” or Disney’s “Beauty and the Beast” (the 1991 animated version, not the unmemorable live action remake), but, for the most part they are a big yawn for me. “The Prom” falls squarely in the latter category. Sure, Meryl Streep and James Conden are troopers who give it their all, but, it is still a musical and I do not like musicals. (It is like me and horror movies – I do not like them but there are some great ones that I do like.)

Generally speaking, my problem with most of the genre is they generate mediocre songs that, somehow, all sound the same, from “The Prom,” to “Frozen,” “Frozen 2,” “Brave” and the recent “Over the Moon.” To my discerning ear listening to the lyrics under the treacle-laden music a problem. We are not talking “West Side Story” here.

The let’s-put-on-a-show vibe of “The Prom” is a throwback to the old days of Mickey Rooney-Judy Garland musicals like “Babes In Arms.” Now, the feel-good musical is mostly noisy, generic songs, dance numbers and a story about “something,” like tolerance. I have to wonder why the filmmakers show that Emma is a lesbian because she wears a stocking cap and dresses with very bad taste.

All of that being said, I am guessing that fans of musicals will be very happy with “The Prom” and all of its bright, fluffy songs, elaborate dance numbers rem’ing Michael Jackson’s “Thriller” and Fosse’s “All that Jazz.” (Well, the Fosse-like number is really a rip-off, not homage.)

I think that Meryl Streep is a national treasure but even she cannot make me love or even like this kind of insipid musical.