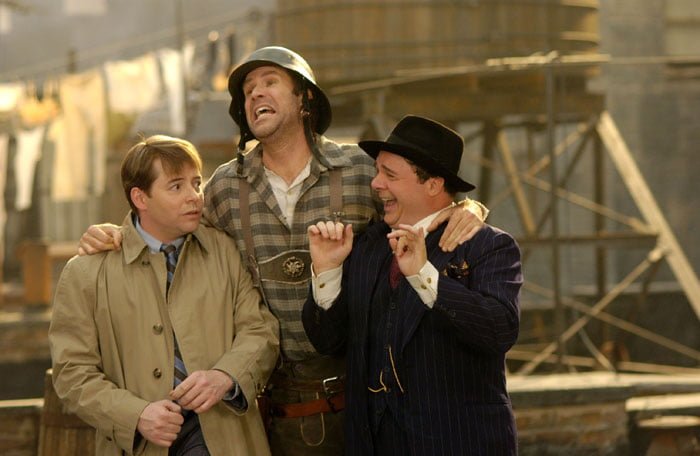 Max Bialystock (Nathan Lane, "The Birdcage," reprising his Broadway role) keeps his fading glory as a Broadway producer alive by bilking old ladies in exchange for sexual services rendered, but finds a new source of inspiration in an unlikely place. Bialystock's meek accountant, Leo Bloom (Matthew Broderick, "The Stepford Wives," reprising his Broadway role), who would love to get into show biz himself, comments that a manufactured flop could be more profitable than a gamble on a hit, and his unethical client bullies him into a partnership. After finding the worst play every written, Bialystock and Bloom become "The Producers."

And so Mel Brooks' comedy has come full circle, from its original 1968 screen rendering (still the gold standard) to its 2001 Broadway revision and now the film of the stage musical. Adapted, like the stage version, by Brooks and Thomas Meehan ("To Be or Not to Be," "Spaceballs"), the movie musical is the feature directorial debut of Susan Stroman, who won Tonys for directing and choreographing "The Producers" on Broadway. Having missed the middle, stage show step, I can say that this new edition should delight fans of the old fashioned musical, but it suffers from Broderick's cartoony attempts to copy Wilder's brilliant interpretation of the character rather than bringing anything of his own to the role. Returning from the stage, Gary Beach ("Man of the Century") and Roger Bart ("The Stepford Wives," TV's "Desperate Housewives") steal the show as dress wearing director Roger De Bris and his flamboyant lover/assistant Carmen Ghia. The film begins as Bialystock's latest opus, "Hamlet: The Musical," lets out and its audience members begin singing about just how awful it was with Brooks's rather amusing lyrics. After Bialystock browbeats Bloom into making good on his shady accounting idea, Bloom returns to his office and escapes the drudgery and his boss (Jon Lovitz, "The Stepford Wives") who hates the smell of self esteem. A lederhosen-clad Will Ferrell ("Bewitched") does his most amusing turn since 2003's "Elf" as "Springtime for Hitler" author Franz Liebkind, adorning the producers with swastika armbands and breaking out into "Der Guten Tag Hop-Clop." Bialystock's choice of the worst director for his awful play brings the duo to the home of Roger de Bris, where they are greeted by Ghia and his record-breaking sibilant ess. On hand are de Bris' entire production team, including a group of faux Village People, to dramatize de Bris' inspiration to "Keep It Gay." When the show finally goes on, it's a camp delight, with the limp-wristed de Bris forced to take on Liebkind's lead amidst showgirls bedecked with sausages and pretzels (and that's Mel Brooks himself overdubbing the infamous 'Don't be stupid, be a schmartie, come and join the Nazi party!' line, just like on Broadway). After this shop-stopper, "The Producers" bogs down with scenes in Rio, where Bloom has fled with Swedish secretary Ulla (Uma Thurman, "Be Cool," "Prime"), and the courtroom, where Bialystock pleads his case. Lane props the proceedings up once more with a jail cell number in which he essentially retells the entire story in song. Old Broadway hand Lane doesn't suffer from comparison to Zero Mostel because even though he's not quite as desperate or seedy, he's a natural in musical theater, but Broderick and his blue blanket are another story and the excessive closeups used by Stroman accentuate his second rate mimicry. Thurman plays Ulla broadly, just right for this vehicle, and her towering stature and long legs make her a perfect specimen for the role. Stroman's brassy direction is a throwback to musicals around the era this one is set in, but she frequently keeps her camera too close to the action which sucks some of the punch out of musical numbers. In particular, an 'exterior' set piece where Bialystock is accompanied by a troop of women with walkers who fall like dominoes is often inexplicably cuts off the dancers at the knees. Production design and costume are average. 2005's "The Producers" will in no way supplant the 1968 original, but it is an amusing alternative for fans of musical theater.

Mel Brooks created a timeless classic, with a little help from Zero Mostel, Gene Wilder, Dick Shawn, Kenneth Mars and many others, in his 1968 comedy about an unscrupulous Broadway producer, Max Bialystock, who, with the help of his naïve accountant, Leo Bloom, sets in motion a scam to make millions by staging a flop. Brooks recreated his wonderful, funny film for the Broadway stage starring Nathan Lane and Matthew Broderick as Max and Leo – earning multiple Tony awards along the way. Now, these actors reprise their stage roles, with a whole bunch of song and dance numbers, in the screen remake of the stage remake of The Producers.” This new version of “The Producers” is better left to fans of the stage play than to the critical examination of the many fanatics who love the ’68 original. From the very start, I, as one of those fanatical fans of Brooks, Mostel and Wilder’s brilliant work, could not help but compare the modern rendition to the original - critically. This new screen version of “The Producers” represents caricature reprisals of the original’s caricature performances by Mostel, Wilder et al. Nathan Lane channels Zero Mostel to near imitative perfection as the actor uses his ample talent to recreate Max Bialystock’s flamboyant role. Lane does make the role his own but always with Zero’s specter floating above. Gene Wilder cannot be surpassed as the neurotic, paranoid accountant, Leo Bloom, and Broderick gives a pale replication of Wilder’s manic insecurities. But, the actor does excel in his song and dance numbers. Uma Thurman, as sexy secretary Ulla, is beautifully statuesque – especially when standing beside Lane and Broderick – and gives a game shot at her song and dance numbers. Lee Meredith did Ulla better and sexier in a smaller role in 1968. Will Ferrell plays Nazi playwright Franz Liebkind well enough but, like the other perfs, is a mere channeling of Kenneth Mars’s original portrayal of the nutty, Hitler-and-pigeon-loving author. Being totally unfamiliar with Brooks’s original Broadway play I don’t know if the rest of the large cast is from the stage version but I suspect so. As such, characters like transvestite musical director Roger De Bris, played by Gary Beach, appear to come straight from the Broadway stage. The cast uniformly recreates the ’68 original but never betters it – unless you like the numerous musical numbers. For me, “Springtime for Hitler” says it all. Maybe Brooks should have taken the helmer’s reigns instead of Broadway director Susan Stroman. I have never been a fan of stage plays and feel pretty much the same about their conversion to the screen. But, since I adore the original of “The Producers,” I gave this remake of a remake a shot. The sometimes-amusing tunes have a bit of charm but the two-plus hour runtime make this a bloated re-imagining of the tight and much funnier 88-minute original.