The Prize Winner of Defiance, Ohio 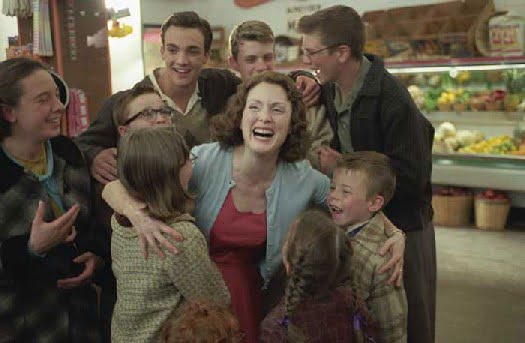 Tuff Ryan (age 13, 16 & 18 Ellary Porterfield) had a difficult childhood, being in the middle of a ten kid household with an alcoholic father who continually mismanaged the family's finances. But Tuff had a shining light in her life, her mother Evelyn (Julianne Moore, "The Forgotten"), a woman with a gift for writing jingles and essays that won contests - lots of them. The adult Terry Ryan remembered her extraordinary mom by writing a book, "The Prize Winner of Defiance, Ohio."

A memoir of a young girl who idolized her mother and pretty much despised her father is bound to be rather black and white, a picture of a saint and a sinner, but the adult reality is usually not so cut and dried. Director Jane Anderson (HBO's "Normal"), who also wrote the screenplay, presents Tuff's point of view intact, a choice that makes her film verge on the brink of syrupy sap, which she then caps with a cloying coda depicting the real Ryan kids reminiscing in their family home. But Julianne Moore's terrific skills as an actress and vivid production design and art direction which bring the 1950's back to life maintain interest, and, if one gives oneself over to the melodrama, "Prize Winner" is perversely enjoyable. Everything is always stacked against the ever cheerful and resourceful Evelyn. After the family receives an eviction notice, Evelyn wins $5,000. The Ryans buy a house, but husband Kelly (Woody Harrelson, "After the Sunset"), encouraged by the loan officer, suggests that Evelyn's signature on the mortgage is not necessary seeing as how he will be paying the mortgage, a decision which not only negates Evelyn's significant down payment but which will, of course, come back to haunt them. The effects of Kelly's drinking on the family are introduced gradually - we first see him pounding back Scotch and a six-pack while pacing around the kitchen listening to a baseball game. It's a kind of self-imposed quarantine - when one of the kids needs something from that room, only Ma has the courage to enter, and she does so tremulously. Kelly takes out his rage at the game score on the freezer Ma won and the noise bring the local cops to the house. Disgusted and ashamed, Ma calls in the family priest, but, as with seemingly all men of the time, he puts the onus of raising the family back on her. That freezer is symbolic, the only thing Ma has stood up to Dad about (the Ryans refer to each other as Ma and Dad). He says it will never be filled and cost too much electricity and it is ironic that it is his drunkenness that ensures it cannot be sold. When he's finally shamed by one of his own kids over spending money on liquor when Ma doesn't have enough to pay the milkman (Simon Reynolds of "Cold Creek Manor," another significant constant of male oppression and humiliation), Dad promises to bring something home for the freezer every day. He does for a while, but is emasculated once again when Ma wins a supermarket sweep. This cycle continues as the kids grow, Ma's contests saving them every time disaster looms, Ma frequently unable to enjoy her winnings because of the needs of her family and inability of her husband to cope. One of her greatest joys (and obviously a huge memory for Tuff) is joining a group of female 'contesters' at the behest of fellow jingle writer and admirer Dorotha Schaefer (Laura Dern, "We Don't Live Here Anymore") for one of their meetings out of state, a trip which Kelly has denied her and does everything to sabotage. Besides a rare day with the girls, Evelyn is gifted with an entry to a Dr. Pepper contest by her long time pen pal Dorotha, another action that will prove ironic in a film fairly flooded with them. Julianne Moore caps her trifecta of 1950's housewives ("Far From Heaven," "The Hours") with a terrific performance in a lesser film. Her Evelyn is completely different from Cathy Whitaker and Laura Brown, both women of a different socioeconomic class that Evelyn's scrimping, Catholic housewife. She's the picture of unfailing optimism and persistent strength, an amateur psychoanalyst and manipulator of male behavior. Only twice does Evelyn waver. She tells Kelly she's not a saint (a statement that defies belief) after he causes an accident of broken glass and spilled milk, both of which cause her serious injury. In another instance, Kelly's wheedling that he only wants to make her happy is met with a retort that surprises even Evelyn in her steely honesty ('I don't need you to make me happy; I just need you to leave me alone when I am.'). Harrelson plays Kelly like a whipped boy, a man whose dreams were shattered (a car accident, probably caused by drink, stole the singer's vocal ability) who reacts by wallowing in self pity. Harrelson shows a childlike devotion to 'Ma' which is more based on neediness than anything. Laura Dern is also the picture of cheery optimism, although hers sprouts from a perfect Betty Crocker life. Her high pitched squeals and genuine, selfless admiration for Moore's character add a bright top note to the film. The Ryan children tend to be pretty interchangeable, with Tuff a standout given her road trip with mom. While Anderson fails to give her story nuance, she does create some interesting visual tricks and metaphors. Moore frequently comments upon the action, sometimes standing next to herself, one Evelyn a narrator, the other in character. Jingles are enacted as song and dance routines and animation is mixed with live action for a litany of Evelyn's winnings. Milk is a symbol of mother throughout the film, never more so than when it literally spills out of her girdle after she returns from the hospital with her arms in bandages. "The Prize Winner of Defiance, Ohio" is the type of film likely to be critically shunned for its overt male-bashing and female martyrdom, but if you can put yourself in Tuff's sixteen year old shoes, it is an engaging portrait of a most unusual 1950's mom.

The story of “The Prize Winner of Defiance, Ohio,” though based on a real-life 1950’s mother and her family, is merely an off the shelf stock story that goes like this: Dad is a screw up who [drinks, gambles or has some other money devouring vice] his paycheck every week. Mom, the mother of 10, puts up with dad’s incompetence and earns enough money [plug in the clever way she does it] to, just barely, make ends meet. This goes on for about 90 minutes with episodes in the life of the family – problems with dad, kids growing up, life-affirming moments, mom always with a stalwart attitude, yada-yada-yada. Then, dad screws up so bad that all will be lost until mom snatches a miracle from the air and they live happily ever after. Been there. Seen that. First time feature director Jane Anderson took this hackneyed story outline and plugged in the anecdotal information provide by author Terry Ryan’s memoirs about her mother, Evelyn (Julianne Moore), the winner in the title. The result, but for the talent of Moore, is a routine made-for-TV type of tale that is supposed to be inspirational. It is not. Julianne Moore gives her third 1950’s period character in recent years – see “Far From Heaven” and “The Hours” – and I hope the triplet is finished. The actress, because of her unusual freckled beauty that seems to typify an Eisenhower-era housewife, is typecast, again, as smart, clever Evelyn. But, I think that Hollywood has gone to that particular trough one too many times. Moore, hampered by the wooden script by Anderson, is not called upon to do anything but be the strong matriarchal figure that holds her family together, always with a ready smile, heart of gold and full of love for her family. Even her screw-up husband, Kelly (Woody Harrelson), can bask in the glow of Evelyn’s goodness – when he’s not drunk. There is a lot of activity going on during “The Prize Winner…” as Evelyn uses her obvious intelligence the only way she knows: enter contests, win prizes, sell the winnings, pay the bills. This piece of retro-memory does do justice to the art, back then, of contesting. It was a time when you actually had to do something to enter a contest, like writing a jingle, a slogan or a poem for the sponsoring company. It’s a real blast from the past for those old enough to remember that era in America and I give the filmmaker credit for that. One underutilized aspect of “The Prizewinner…” is the introduction of Evelyn’s kindred spirits, the Aphrodaisies, a club of like-minded contesters. Their leader, Dortha Schaefer (Laura Dern), is renown in the prizewinner world and invites Evelyn to join her and the rest of the girls. This brief interlude is cleverly handled and amusingly set, with one of the daisies joining their fun in her giant iron lung (which she probably won in a contest). The brightly painted lung is an inspired piece of set design. This, though, is the high point in the film. The production captures to look and feel of the 1950’s. Edward McAvoy’s production design ably depicts small town middle America of the time. The same goes for the detailed costuming by Hal Bamet. Jonathan Freeman lenses things in a way that fits the homey nature of “The Prize Winner…” giving things a warm, soft lighting. The Prize Winner of Defiance, Ohio” carries no surprises in its too sweet telling of 50’s family life. It’s too lightweight to have shoulders at the theater but will have some appeal to Julianne Moore fans, mainly on home video.