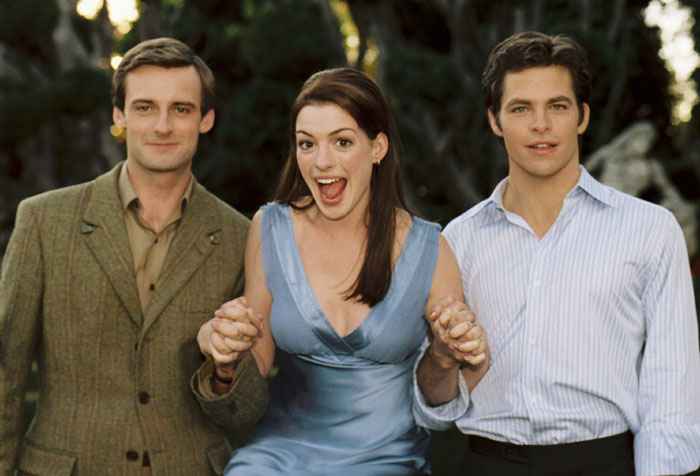 Five years have passed since Mia (Anne Hathaway, "Ella Enchanted") learned she was a royal princess of Genovia and now it is time for her to succeed her grandmother, Queen Clarisse (Julie Andrews), as the country's ruler. However, there is a catch neither Mia nor the Queen was aware of - a female ruler of Genovia must be married to ascend the throne, and so Mia is given a scant thirty days to engineer "The Princess Diaries 2: Royal Engagement."

Director Gary Marshall does everything possible to undermine the sequel to his tremendously successful "Princess Diaries," but thanks to the maturation of star Hathaway, this second outing is a bit more bearable than the first. "Royal Engagement" (the title alone suggests a "Wedding" installment cannot be far behind) is a plebeian affair that is unlikely to court any new fans. Mia's succession is questioned by Viscount Mabrey (John Rhys-Davies, "The Lord of the Rings" trilogy) who is hoping to replace Mia with his nephew, Lord Nicholas Devereaux (Chris Pine), a born and bred Genovian. Clarisse, having apparently consulted Sun Tzu's "Art of War" or Machiavelli's "Prince," invites them to stay at the palace while Mia selects Lord Andrew Jacoby, Duke of Kennilworth (Callum Blue, Shotime's "Dead Like Me"), as her suitor. Of course, sparks fly with the wrong guy, and Mia's every wrong move is captured for broadcast on the local morning show "Eggs with Elsie." Hathaway, who first played Mia with overly broad swipes, has honed her comic timing in the intervening years and become a much more likable screen presence. Pine is fine as the hunky Nicholas, believably morphing from untrustworthiness to gentlemanly concern and Blue is an apt counterpart, an unstuffy Brit who nonetheless cherishes propriety over passion. Other newcomers include Erik Brag as new security kid Lionel, a comedic successor to Clarisse's loyal Joseph and Shea Curry and Anna White as Mia's cartoonish maids Briggitte and Briggitta. Diary veterans fall into two camps - the welcome returnees and the awkwardly inserted. Julie Andrews once again provides a warm presence, albeit with a slightly mummified appearance and ofttimes raspy voice. She does sound fine in a slumber party duet with Raven. Elizondo continues his romance with the Queen with a nicely realized payoff and Kathleen Marshall is reassuring as Clarisse's exceptionally competent assistant Charlotte, but pity poor Caroline Goodall and Larry Miller, whose last minute inclusions smack of underdeveloped inconsideration. Marshall's worst sin is in his treatment of Heather Matarazzo as Mia's best friend Lilly Moscovitz - Marshall stands the actress in front of the camera to proffer one-liners and stuffs the scenes into the film with no finesse or flow. The story unfolds with a herky-jerky rhythm, one misadventure after another with seemingly little consequence. Perhaps the saddest thing on display here is the realization of Genovia. After all the coin raked in by the first, production designer Albert Brenner ("Pretty Woman") creates a studio-lot bound Genovia where a royal grand parade is embarrassingly short on crowd extras. On the plus side, "Diaries 2" dispenses with the fairy tale ending for a refreshingly modern statement, but I'm sure it is no mistake that the twist neatly dovetails into an opening for a third installment. Hathaway's charm goes a long way towards making this harmless bit of princess empowerment bearable, but it's a very common example of filmmaking.