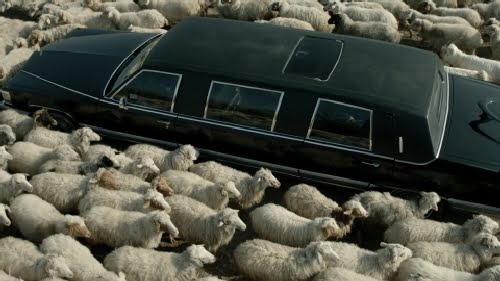 In an unnamed country, a grandfather (Mikheil Gomiashvilli) displays his power for his grandson (Daci Orvelashvilli). He picks up the phone and demands the city’s lights be turned off, then on again, to entertain the boy. But, when the lights do not come back on and explosions and gunfire wrack the capital, the most powerful man in the country must run away from his terrible misdeeds as “The President.”

This stunning production from Mohsen Makmalbaf is a fable about the different paths that can be taken when rebuilding a country after the overthrow of a tyrant. Told from the perspective of that tyrant, disguised and attempting to flee with his grandson, he meets the people he so callously ruled. In some ways, the film is reminiscent of Preston Sturges's "Sullivan's Travels," but Makmalbaf's film is no comedy, especially as it builds to its climax as a mob decides the fate of the man and his grandson on a beach.

I am not sure what I expected from veteran Iranian director Mohsen Makmalbaf with “The President.” In the back of my mind, I envisioned something akin to the FX television series, “Tyrant.” Boy was I wrong. The helmer, who co-wrote the screenplay with Marziyeh Meshkiny, starts thing out with a bang as the revolutionary forces strikes out against the oppressive tyrant. In short order, he gathers up his family and they head, in an armed convoy, for the airport and escape.

It is here that the president makes the exact wrong decision by catering to the demands of his young grandson, who wants go to home to see his friend. This act of grandfatherly indulgence will set the pair on a course that, hopefully, will lead to the man’s redemption for his nefarious deeds – the film begins with the president signing a sheaf of death orders. It is a journey that keeps the viewer guessing on the inner thinking of the dictator.

Mohsen Makmalbaf presents us with a story of a man’s journey. In the beginning, you hold the man in contempt for his abuses on several levels. Then there is the physical journey as the dictator and his grandson traverse the rugged countryside to a rendezvous by the sea and safety. It is during this trek that we see the title subject’s eyes opened to what his abuse of power has wrought on the people of his country. He undergoes a metamorphosis of both mind and heart that is a transformation of spirit as he meets and lives, incognito, with his victims