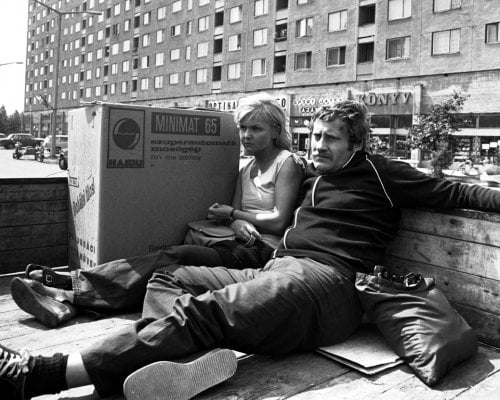 Béla Tarr's third full length feature (his first with professional actors) is like an Eastern Bloc tribute to Britain's kitchen sink dramas. The film is in his preferred b&w, but unlike his later films with writer László Krasznahorkai, this is a fairly straightforward tale that is at once an age old battle-of-the-sexes and a reflection on the ties between happiness and material wealth. The film's midsection previews Tarr's future stylistic direction with an evening out of dancing and singing that feels as long as the Corleone wedding (and Tarr evidently does have a sense of humor as the theme from "The Godfather" is used during this sequence). The film opens on a dreary apartment block surrounded by ugly utility wires. A bird flies out. That would represent Férj (Róbert Koltai), a civil engineer feeling suffocated by his life with wife Feleség (Judit Pogány) and their two young children in a tiny apartment. She nags and wails about having no life, he packs and leaves then returns in a never ending cycle. When he finally takes her out for a night, he dances with another and closes the club singing drunkenly with his friends while she sits and pouts. An offer for a two year job in Romania which would pay double salary begins the real argument of what each is looking for. Ironically, given Tarr's later intoxication with the long, leisurely take, some of the scene transitions in "The Prefab People" are so abrupt they're disorienting, but once one gets used to the rhythms of this strained marriage, the final jump provides a surprising compromise. Pogány issues the wife's misery in a sympathetic stream that nonetheless becomes unbearable nagging against Koltai's passive flight.