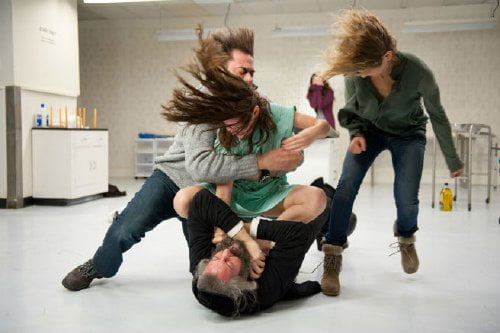 Clyde Brenek (Jeffrey Dean Morgan, "Watchmen," "Peace, Love, & Misunderstanding") is spending a day with his daughters after recently being divorced from their mother (Kyra Sedgwick, TV's 'The Closer') when they come across an ordinary looking yard sale that might help furnish his new house. But Em (Natasha Calis) finds something extraordinary there, a locked antique box carved with Hebrew script. They buy it, but Em's behavior immediately starts to change, some of it implicating abuse by Clyde. Clyde is left alone to learn that Em's obsessing over a dybbuk box used to store the unattached spirit of a sinner looking for a human host and its found one in Em for "The Possession."

For those who've never seen the Coen Brothers' "A Serious Man," a dybbuk is a Jewish demon of sorts and they've been being exorcised in rites for centuries (check out YouTube for some 'real' 'live' ones). We've also had what seems like centuries of bad exorcism movies ever since Friedkin's 1973 masterpiece, so the different angle of a Jewish version, also purportedly 'based on a true story' (see here and here), sounded intriguing. Guess again. Writers Juliet Snowden & Stiles White ("Boogeyman," "Knowing") follow the same old template, distrusting the 'less is more' approach for sensationalism that goes far beyond anything in the lore and Danish director Ole Bornedal ("Nightwatch," "Just Another Love Story") compounds the issue by orchestrating with a sledgehammer. Jeffrey Dean Morgan puts in yeoman's work and some of the makeup and visual effects are eerie, but the film fails to evoke the feeling so integral to the genre - horror. A prologue raises a red flag. We see an old woman gazing across the room at the box in question on her mantle. A small, cackling type voice, not unlike "Lord of the Ring's" Gollum actually, can be heard emanating from within. The woman turns on music, then approaches with nails and a hammer (we have no reason to believe the box is open). Suddenly - boom, the woman's smashed across the room and contorted into the expected unwieldy positions of the possessed. Then her head's slammed into a coffee table. Now I ask you, if a dybbuk box is created to trap a dybbuk, how does any of this make sense? It's too over the top too early in the film. The Brenek family is introduced. Clyde seems like a decent sort, not too pleased with the new man, Brett (Grant Show, TV's 'Swingtown'), in his ex-wife Stephanie's life. Hannah (Madison Davenport, Showtime's 'Shameless') is a bratty but well adjusted teenager. Em's at the age where she still believes her parents might get back together, so of course all her upcoming demonic activity can be explained as acting out. The only interesting thing the screenwriters do is have the dybbuk play the cast of characters against the family's current dynamic. So once Em's got her beloved box in the new room of dad's new home, things start getting strange. First come moths - the size of which I've never seen in nature. Then there's an invisible fridge raider. Em's eyes go all distant and creepy cold (the young actress has been well schooled in turning-her-head-very-slowly, looking-up-over-her-brow and not-blinking). When dad visits his old home, Em demands to know how her box is and forbids him to touch it. Of course, Clyde immediately goes home and opens it to find a strange assortment of odd things. Once the dybbuk's gotten him out of the picture he turns to Professor McMannis (Jay Brazeau, "Watchmen's" news vendor) and gets one hilariously campy and hammy sermon as to the meaning of the box's Hebrew etchings. That sends him to the Hasidic area of town where a rabbi's son Tzadok (recording artist Matisyahu) bucks his elders' hands-off approach. If you've seen the movie's trailer, you've seen the film's most effective moment, where Em peers down her own throat in the bathroom mirror only to see two fingers crest the back of her throat. There's some strange things done with her eyes and one other unsettling image resulting from an MRI. Everything else is just loud and in your face. Anton Sanko's (HBO's 'Big Love,' "Rabbit Hole") score uses the thrumming pulse of "Jaws" and is cranked up to make you jump. Dan Laustsen's ("Silent Hill," "Just Another Love Story") camera hangs back at corner edges, just daring you to look further. Editor Eric L. Beason ("The Rookie," 2009's "The Stepfather") includes an expository exorcism montage using YouTube clips crosscut with pans of Hebrew scrolls that's just embarrassing. As if to remind us of his past fame, Bornedal holds his climax in a hospital's basement morgue where the unleashing of hell apparently cannot be heard on floors above. To give some credit, the sound mix and edit of the dybbuk voice coming from Em (as opposed to coming from the box) can be creepy.