The Pirates! Band of Misfits 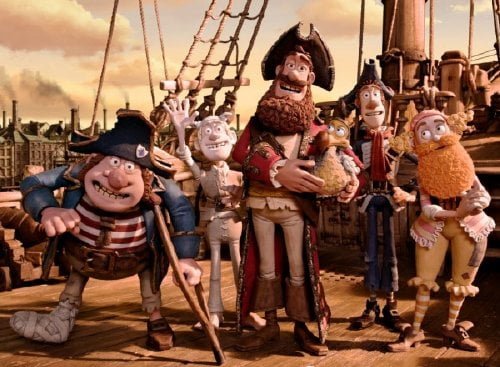 The Pirate Captain (voice of Hugh Grant) is determined to defeat both Black Bellamy (voice of Jeremy Piven) and Cutlass Liz (voice of Salma Hayek) for the coveted Pirate of the Year award and so sets sail with a crew that includes such motley members as The Albino Pirate (voice of Anton Yelchin), The Surprisingly Curvaceous Pirate (voice of Ashley Jensen) and The Pirate Who Likes Sunsets and Kittens (voice of Al Roker) in "The Pirates! Band of Misfits."

The second film to be released on 4/27/2012 that is set in the mid 1800's and uses the phrase 'serial killer' over a hundred years before it was coined (the other being "The Raven") can be forgiven because this is Aardman land and regular rules do not apply. Not since Johnny Depp, who surprisingly does not cameo here, first surprised us by making a Disney theme park ride entertaining have a bunch of befuddled pirates been so much fun. Despite having been adapted by Gideon Defoe from his book 'The Pirates! In an Adventure with Scientists,' there is much of the production house's beloved 'Wallace and Gromit' to be found in the characters of the Pirate Captain and his Number Two, The Pirate with a Scarf (voice of Martin Freeman). And yet, although the movie's a fun lark, it's never as funny and inventive as the inventor and his dog. This one's an odd mix of oftimes being too sophisticated for kids and too unsophisticated for adults. It's more smile inducing than laugh-out-loud funny. That's not to say it's not worth getting onboard with "The Pirates," who, after all, turn Queen Victoria (voice of Imelda Staunton) into a knife wielding villain among other things. The tale begins with an argument among the crew about what's the best thing about being a pirate (the looting! the cutlasses!) is settled by Pirate Captain - it's ham nite! They arrive at Blood Island so that he may enter the annual contest, but the competition proves fierce. Fist Cutlass Liz sashays in with the world's largest diamond. Then it's Black Bellamy, making an entrance from the belly of a whale on a cascade of gold doubloons (Pirate Captain's wanted poster only looks for a dozen of the coins, with the cheeky added defacement of 'and a free pen.') Determined to outloot them, Pirate Captain heads off, but his luck is lousy, boarding plague ships, ghost ships and one full of nudists. His last attack, however, is on Charles Darwin's (voice of David Tennant) Beagle and although the Captain utterly loses it when he realizes that yes, once again he's boarded a ship with no booty, he perks up when Darwin tells him of the untold riches to be earned from winning the science competition - and it just so happens that Darwin recognizes the Captain's Polly Parrot as a dodo, though to have been extinct for 150 years. There are only two major problems - the competition is in London, home of the pirate's worst enemy, Queen Victoria, and Number Two cannot convince his boss that Darwin appears to be a tad untrustworthy. This time out Aardman combines stop motion animation with some sequences of the traditional kind to move the action along, amusingly, on old world maps. We see the same Chiclet teeth and oversized hands of Wallace applied to the pirates. There are plenty of animals along as well. In addition to Polly, the most significant animal character is Mr. Bobo, a 'manpanzee' butler at Darwin's very Gothic London home who is not unlike the ape in the 'Murders in the Rue Morgue.' One repeating gag is that Bobo uses printed cue cards to 'speak,' but these expressions do not rely merely on the printed word but in how those words and cards are animated. The science competition gives the filmmakers another chance to add a dash of Wallace, but pay attention as some of the film's best gags lie around the edges of the screen (make sure to read business signs both on Blood Island and the streets of London). Vocal talent is nicely cast, the clean shaven Grant reveling in his 'luxuriant beard,' Freeman the voice of worried reason. Of the other pirates, Brendan Gleeson stands out as The Pirate with Gout. Piven has a lot of fun as Bellamy. A small bit by David Schneider as Scarlett Morgan, a caged pirate on the London docks, is a gem. Director Peter Lord ("Chicken Run") builds to an insane climax aboard the Queen's flagship, an amalgamation of all things Victorian, that recalls, of all things, Andrew Bergman's 'The Freshman.' And unlike those guys in the Caribbean, this band of misfits deserve a franchise. I, for one, would like to know just what drew that surprisingly curvaceous pirate to this crew.