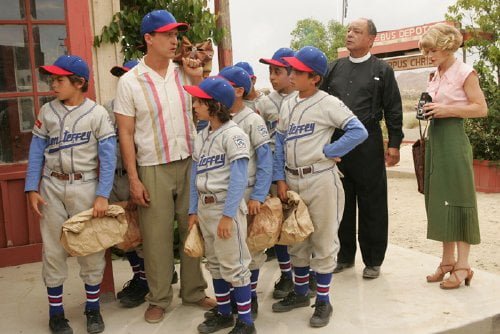 In 1957, a group of poor, shoeless kids from Mexico were formed into a baseball team by a broke, has-been major leaguer (Clifton Collins Jr., "Sunshine Cleaning") and the parish priest (Cheech Marin). Facing all manner of obstacles, including racism, the boys from Monterrey, Mexico won thirteen games in a row in the Little League World Series and made history when Angel Macias (Jake T. Austin, "Hotel for Dogs") pitched "The Perfect Game."

Yet another in the long line of inspirational sports stories, "The Perfect Game" is good, wholesome family entertainment with big messages about tolerance and team work, but it should be no surprise to anyone that W. William Winokur's adaptation of his book is Hollywoodized with cliched subplots. Director William Dear (1994's "Angels in the Outfield") has a predilection for baseball movies and he does get the sport front and center but some of his scene transitions are clumsy. Still, a bunch of appealing youngsters paired with the terrific character Collins and "The Perfect Game," while corny, is less treacly than it could have been. Angel lives in the shadow of his older brother's death, a death his father, steelworker Umberto (Carlos Gómez) cannot put behind him. But Angel shares his brother's love of baseball as does Padre Estaban (Marin), who encourages the boys to listen to games on his radio. When Angel finds a real baseball, an actual St.Louis Cardinals ball no less, it sees it as a sign. Sure enough, practicing his pitches draws out Cesar, a former towel guy disillusioned by his experience with the big leagues in the U.S. Cesar tells Angel he was a coach, however, and before he knows what hit him, he's coaching Monterrey's first Little League team with only four weeks before World Series. The rag tag team, of which only four (and a half) players really stand out, board a bus for the border each clutching a paper bag containing one clean pair of underwear. They disembark at the boarder and walk the ten miles to their first game, which, much to their surprise, they win against their arch rivals from Mexico City. When they keep winning, they attract the attention of newspaperwoman Frankie (Emilie de Ravin, TV's "Lost," "Remember Me"), who charts their amazing story while noting the hardships they endure. There is some nice stuff here. When the boys stop at a diner, they note the Houston team's one black player sitting alone and rally around him, gaining a big fan in diner owner Betty (Frances Fisher, "In the Valley of Elah") in the process. This offsets a bus station ticket taker's refusal to let them use the bathroom. A racist police chief ("Repo Man's" Tracey Walter) is all set to deport the team when their three day Visas are long expired, but in steps the Secretary of the Interior to rectify the situation. A white team ignores the advice of Cool Papa Bell (Louis Gossett Jr., "Why Did I Get Married Too?"), but the Monterrey boys are glad to take it and when they balk about hitting the field without their usual blessing from the Padre (shipped back home), Papa Bell recruits his minister nephew Clarence (John Cothran, "Black Snake Moan"). But other things work less well. Angel's (manufactured?) conflict with his father is too text book and contrived. Cesar's background with the Cardinals is oddly defined and his belittlement at the hands of two pro players when touring with Louisville Slugger doesn't ring true. The film is in English, yet Frankie needs to explain to someone that the boys don't speak English, a fact which could have been established without this jarring note. Cesar's courtship of Maria (Patricia Manterola) back in Monterrey is only good for a last act gag. Of all the kids, Austin and Jansen Panettiere (brother of Hayden) as the team's other, lesser pitcher, get the most attention and they're both good. Color is added by Moises Arias ("Hannah Montana's" Rico), the kid who doesn't have a lot of sports ability but knows his way around the ladies and Ryan Ochoa (2009's "A Christmas Carol") as the team's catcher, earnest with wonderful expression. Dear does a good job charting the team's build and then builds some real suspense into the last, fateful game. The typical montage of all those listening to the radio, nicely melds in not only the folks back home, but the ones they've met along the way, including the two border guards who were astonished the boys would walk. The real footage Dear slips in occasionally works surprisingly well, although a post-game coda is too weird a mix of documentary and fiction. "The Perfect Game" is a nice little slice of baseball history that's not bad for what it is, but after a false start with a release date in the fall of 2009, this second bid for theatrical play is likely to strike out.