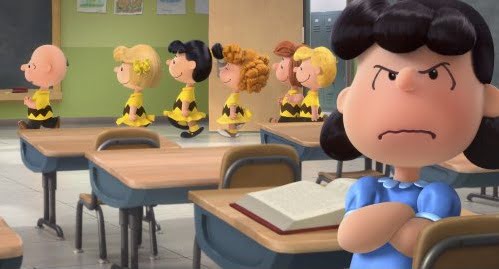 As his human, Charlie Brown, navigates school life and his crush on The Little Red-Haired Girl, Snoopy takes pen to paper and spins it into his own fantasy life in "The Peanuts Movie."

Having grown up at the height of Peanuts marketing in the 1970's, the idea of a computer animated rendition of the cherished strip characters seemed like sacrilege. Kudos, then, to the dedicated producers and director Steve Martino ("Dr. Seuss’ Horton Hears a Who!") for creating something new while retaining the old line drawn magic. As written by late cartoonist Charles M. Schulz's son Craig, grandson Bryan and Bryan's writing partner, "The Peanuts Movie" plays much like a greatest hits package, an approach that's just fine for introducing a new generation to Charlie Brown and his gang while giving those more familiar a nostalgia trip. Charlie Brown's everyday anxieties intensify when he's lovestruck by the new girl in school, but when he retrieves her dropped pencil and sees it has teeth marks on it just like his own, he has hope. This being Charlie Brown, of course, every time he's on the verge of success, his hopes are dashed. But Charlie is a winner in his loserdom, always handling disappointment with honesty and heart. All the familiar touchstones are here - the pitching mound, the kite eating tree, Lucy's psychiatry booth, Schroeder's piano, Snoopy's physics-defying doghouse and the classic music of Vince Guaraldi. Vocal casting is exceptional, every character sounding just how we remember them from the original foray into animation, 'A Charlie Brown Christmas.' The painstaking animation team has done a great job, Charlie Brown's neighborhood coming to life in 3D, yet comfortingly familiar (Pigpen's dust cloud is particularly impressive in the format). The characters themselves now have realistic looking hair and textured clothing, but their facial characteristics and expressions spring from Schulz's original squiggly lines. If "The Peanuts Movie" is intended as a new franchise starter, Blue Sky has established a solid base. Going forward, the challenge will be how to spin fresher stories while retaining Schulz's distinctive world. Grade: