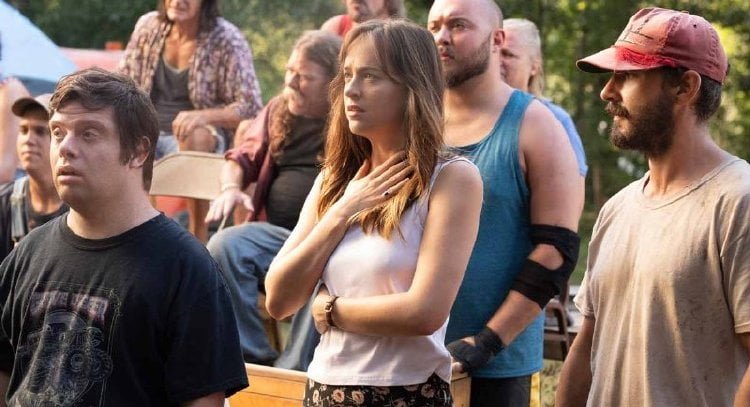 22-year old Zak (Zack Gottsagen) may have Down syndrome but that does not, can not, will not stop him from becoming a famous professional wrestler named “The Peanut Butter Falcon.”

Tragic circumstances have led to Zak (Zack Gottsagen), a young man with Down syndrome, being housed in a North Carolina nursing home by the government. Zak knows he doesn't belong there and yearns to go to the wrestling school run by his idol, The Salt Water Redneck (Thomas Haden Church), but his escape attempts have caused his caregiver Eleanor (Dakota Johnson) to label him a flight risk. Closer to the water, Tyler's (Shia LaBeouf) life has been upended by the death of his older brother Mark (Jon Bernthal) and he's resorted to stealing crab pots. On the run from enraged fishermen Duncan (John Hawkes) and Ratboy (rapper Yelawolf), Tyler gains an unexpected traveling companion when Zak's latest escape attempt is successful and he promises to get the kid to his destination where he hopes to launch a wrestling career as "The Peanut Butter Falcon." Cowriter/directors Tyler Nilson and Michael Schwartz make their feature film debut with a sweet-natured twist on Huckleberry Finn that they wrote for Gottsagen after admiring his talent when visiting a camp for actors with disabilities. Gottsagen and LaBeouf fall into a wonderful rhythm, a pair of odd couple coconspirators on a distinctly regional American adventure. The film has its faults including distracting continuity errors, awkward flashback transitions and a story whose resolution requires a heaping suspension of disbelief, but "The Peanut Butter Falcon" marches to its own drummer. After running out of fuel racing away from Duncan and Ratboy, Tyler's forced to scuttle his boat and set off on foot. After hitching a ride and learning there is a roadblock ahead with his name on it, Tyler is forced to turn back. It is here that he crosses paths with Zack, a young man clad only in underwear with no money or provisions. Tyler's not amused and quickly establishes rules, but once he observes Zak's do or die pluck and hears his outlandish goal, he begins to support the kid, using their shared obstacles as a training ground. Back at the nursing home, Eleanor is tasked with finding Zak before the incident is reported to the state, and, knowing of Zak's infatuation with the Salt-Water Redneck, sets off in that direction. When she shows Tyler Zak's photo in a convenience store, Tyler deflects with heavy flirtation. She does eventually catch up with both, but Zak outwits her and Eleanor has no choice but to join the duo on their downstream journey on a homemade raft. Nilson and Schwartz stud their screenplay with all kinds of colorful characters for their adventurers to interact with. Carl (Bruce Dern) is Zak's nursing home roomie and escape aid. Bruce Henderson is the colorful convenience store clerk who makes his own moonshine and isn't sure quite what to make of Tyler. Jasper (Wayne Dehart) is a blind black preacher who helps the boys after assessing their good hearts. Thomas Haden Church is lovely as the washed up wrestler who, moved by Zak's devotion, resuscitates his persona.Jake 'The Snake' Roberts is Sam, the duplicitous wrestler who gives Zak his first official match. The film is undeniably sweet, a little corny and often laugh-out-loud funny. The film is given a hazy glow by cinematographer Nigel Bluck (HBO's 'True Detective') that evokes North Carolina coastal marshes (the film was shot around Savannah, Georgia). Music favors banjo and drums, bluegrass and country, with soundtrack selections from The Staples Singers, Yo La Tengo and more. Grade:

“Friends are the family you choose.” Those are the wise words that Zak’s roommate at the nursing home, Carl (Bruce Dern), tells his young friend as he help him break out and enter the new life of his dreams. The break out, Zak’s umpteenth, leads him to hide out on the crabbing boat of Tyler (Shia LaBeouf), a poacher being chased by the two brothers he stole from. Meanwhile, Eleanor (Dakota Johnson), the employee responsible for Zak, sets off to find him. You can guess what is going to happen in this odd-couple-buddy-road-trip movie that touches all the necessary points but does it in a likable, good-hearted manner that has you rooting for Zak, Tyler and Eleanor all the way through. Thrown into the mix – throwing plays prominent – is Thomas Haden Church as Clint, AKA The Salt Water Redneck, and his defunct wrestling school, adding to the film’s amiability quotient. All of these elements – Zak’s dreams, Tyler’s search for a good life and Eleanor’s honest caring for Zak – come together in a charming way for co-writers and directors Tyler Nelson and Michael Schwartz. They give us a story of heroes and villains, dreams and hopes and wrap it into an affection-laden story about family.