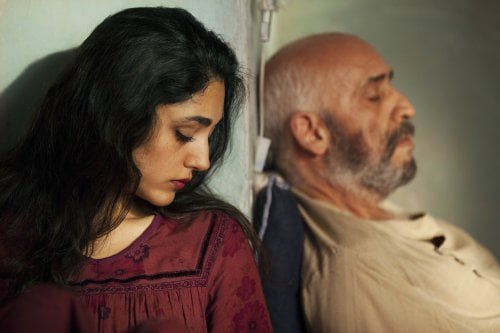 A woman (Golshifteh Farahani) in an unnamed Muslim country in the midst of a jihad has to care for her wounded husband (Hamid Djavadan), much older than she, shot in the neck during a battle. He is in a coma and she must care for him in their decrepit home. As she tends to his wound, she begins to tell her unconscious spouse about her despair and unhappiness in her marriage, making him “The Patience Stone.”

In war torn Kabul a woman (Golshifteh Farahani, "Body of Lies," "Chicken with Plums") tends to an older, comatose man (Hamidreza Javdan), a soldier with a bullet in his neck. 'Hold your breath,' she asks, hoping for some kind of communication. The local mullah (Mohamed Maghraoui) has assured her that her husband will walk and talk again within two weeks, but as the days wear on and her situation worsens, he does not change and the woman begins to talk more and more freely, as she never has before, using the man as "The Patience Stone." A mythical black stone of Persian legend absorbs the problems of the person who confides in it until it explodes. Director Atiq Rahimi, adapting his own novel with prolific screenwriter Jean-Claude Carrière ("The Discreet Charm of the Bourgeoisie") uses this device as a liberating, escalating series of confessions in which one woman finds herself in speaking to a man who barely acknowledged her. Farahani gives her character an impressive arc, beginning as a fearful, submissive Muslim wife and leaving us a free and confidant sexual being. The woman, who has no money to pay the druggist for her husband's drip substitutes water, until that becomes an issue as well. There are also two small children to care for and on the sixteenth day bombing and gunfire send them into a panic. When she returns from underground shelter, she finds someone has taken her husband's ring and watch and so she leaves her children with an aunt, in of all places, a bordello. Rahimi uses each new hardship, each new character, each new street scene, to broaden his heroine's story. Passing by men fighting quail gives way to her childhood, the daughter of such a man who loved his birds but treated his family barbarically (the symbolism has been flipped from the opening shot of the curtains in the husband's room, printed with flying birds). The theft evokes her anger at having been abandoned by her husband's mother and brothers. When an armed man (Faiz Fazli) breaks in with a stuttering young soldier (Massi Mrowat), she uses recent experience to proclaim herself a whore (having hidden her husband) and she is condemned but left alone. Until, that is, the young soldier returns, scattering coins at her feet. This last act looks to only add to the horrors, but gradually turns into something else altogether. If Rahimi begins his film in a room so bare it resembles a cell, he ends it in the selfsame one like something out of 'Arabian Nights,' his oppressed wife rendered Sheherazade. The Afghani expat filmmaker and his cinematographer Thierry Arbogast ("La Femme Nikita," "The Lady") shot exteriors in Kabul while interiors and their Iranian ex-pat star stayed in Morocco. Considering the subject matter, "The Patience Stone" was nonetheless Afghanistan's official entry for the 2012 Foreign Language Film Oscar. The stunning Farahani is expressive when silent, but occasionally the almost non-stop soliloquy can become a little wearing. But the film succeeds in transporting us into an almost unimaginable point of view and Farahini's metamorphosis is utterly complete.

Syngue sabour is a magical stone from Persian mythology that, when placed in front of a person, absorbs the unhappiness, suffering, pain and misery of life and shatters when full. For the woman, her husband becomes the titular stone as she bares her soul to her coma-bound patient. The woman’s story takes place in the midst of a civil war – the reason for the man’s wounds – inside a fundamentalist Muslim society. When she emerges from her bomb-damaged home to try to get food and water for her young daughters, she is in full burqa, covering everything except for her hands and feet – even her face is concealed with a mesh fabric screen. As the woman struggles through this time of war, where battles take place outside her door, we learn about her loveless marriage to the much older man she had never seen before – she was married to the jihadist in absentia. We also learn of the hard life she had to endure under his cruel control. As she pours out her heart to him (and us), we see a slow change as she, first, wails about losing her husband and being left alone. But, as his coma continues, she begins to see that she was robbed of any happiness – until a young rebel attacks her, thinking she is a prostitute. For the first time in her life she feels happiness. Sophomore director/co-writer Atiq Rahimi, with Jean-Claude Carriere, builds a character, in the woman, that is fully drawn, which brings me to Golshifteh Farahani, the actress portraying the woman. Faharini takes her character and breathes life and dimension into the woman. As the story progresses and the woman loses the yokes of her past, there is a physical change in her face as her burdens fall away – she becomes more and more beautiful. Farahani gives a one woman performance that is one of the top on my list for best actress. The film is mostly set in the tiny room the woman shares with her unconscious husband and the claustrophobic feel is palpable both physically and, for the woman, mentally. This is an unsentimental look at the plight of a woman living in an oppressive world where she has few, if any, rights. “The Patience Stone” has a feminine viewpoint, yes, but it is also an indictment of a culture that would repress women’s rights en total.