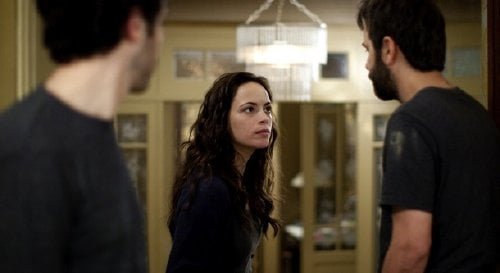 Ahmad (Ali Mosaffa) returns to Paris, after a four-year absence in his native Iran, to finalize the divorce with his ex-wife, Marie-Anne (Berenice Bejo). It soon becomes apparent that she is in a relationship with another man, Samir (Tahar Rahim), whose wife is in a coma. And, Marie-Anne’s daughter Lucie (Pauline Burlet) blames her mother for the wife’s comatose condition. Ahmed’s arrival will be the catalyst to bring them all together to delve into “The Past.”

When Ahmad (Ali Mosaffa, "Leila") arrives at Charles de Gaulle airport from Tehran, Marie ("The Artist's" Bérénice Bejo) is there waiting and the two seem happy to see one another, until we learn that Ahmad is there to finalize their divorce. In no time at all they are squabbling about a prior trip he canceled, her failure to book him a hotel room and the man, Samir ("A Prophet's" Tahar Rahim), he says she neglected to tell him she was living with. Add in Marie's two daughters (by men other than Ahmad and Samir), Samir's troubled son Fouad and the reason for his rebellion, and everyone in this extended, broken family has their own view of "The Past." Cowriter (with Massoumeh Lahidji, "Certified Copy")/director Asghar Farhadi delivers another well acted tale about how individual perceptions of events can lead to conflict. But after his Oscar winning "A Separation," it appears that Farhadi has found a formula and if one teenaged girl is impacted by a secret, well surely piling on more will be better. There are so many twists and turns as one revelation after another reshapes the truth that "The Past" begins to feel contrived, like an art house soap opera. The principals, at least, convince us we're watching genuine human behavior. Bejo's stressed passive aggressive behavior has resulted in a house in disciplinary chaos, its two adult males trying to read her while eyeing each other from opposite corners. Ahmad, the only non-parent, proves a calming influence with the children, including Marie's missing teen Lucie (Eliza Dushku lookalike Pauline Burlet, "La Vie en Rose"), who gradually opens up to her preferred stepdad. Ahmad keeps getting drenched - literally and figuratively - but he's the only one who seems able to find clear skies ahead. Farhadi creates some wonderful set pieces here. When Ahmad presumes a man-of-the-house role, Samir takes over fixing Marie's plumbing(!). Marie's reassignment of sleeping arrangements inadvertently touches off Fouad's insecurities. Samir's use of scent therapy with his coma-bound wife produces a tear which only we can see. But Farhadi's last act switchbacking with a character of little prior importance smacks of screenplay showboating. The quiet restraint of his prior film, which also delved more into the Iranian character, something this film largely ignores, was a lot more elegant. Still, intelligent adult dramas aren't exactly a dime a dozen and "The Past" has its payoffs.

Iranian-born Asghar Farhadi brings us a family drama that is a multifaceted character study. Ahmad goes back to his former home town to end, officially, his marriage to Marie-Anne. It becomes relational triangle when her lover/fiancé Samir enters the picture with his baggage of a wife in a coma and a son, Fouad (Eyles Aguis). The boy lives with the couple and Fouad is a sullen youngster, especially toward his father, further complicating family life. “The Past” is Farhadi’s follow up to his Oscar winning foreign-language film, “A Separation.” Both films deal with a crisis in the life of a family, but, where the 2011 film was about keeping the family breaking up, “The Past” is about one already broken. Ahmad is, almost, the voice of reason when he arrives in Paris to cooperatively sign the divorce papers from his long-ended marriage. The volatility of the household he comes back to is a hotbed of tensions – mother and daughter, father and son, man and woman. How the individual chapters of this story play out is what “The Past” is all about. The studies of these characters by the talented actors make “The Past” a worthwhile family drama It is not for all tastes but does give a view into the life of a mixed cultures trying to make sense of things.