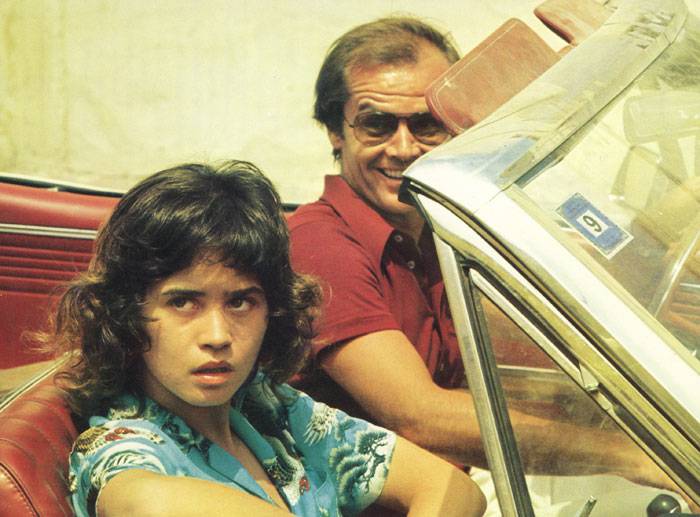 Reporter David Locke (Jack Nicholson) drives through the bleak, hot landscape of the Algerian desert in search of a story. Instead, he faces danger and death and strands his Land Rover in the shifting sands. He makes his way back to his isolated hotel by foot only to discover his neighbor, David Robertson (Chuck Mulvehill), lying dead in his adjacent room. This death poses an opportunity for Locke to change his identity and his life’s direction in Michelangelo Antonioni’s “The Passenger.”

This 1975 film is being re-released in the US in its original form as seen in Europe 30 years ago. “The Passenger” is an art house movie that resonates even today with a side story about freedom fighters buying arms to overthrow their repressive government that bears comparison to our present world of terrorist activity. This is enveloped in the tale of David Locke, a man who wants out of his life as a harried reporter and his marriage. The discovery of the dead Robertson affords David the chance for escape as he assumes the dead man’s identity. But, David knows little, at first, about his new persona. He quickly learns that the man was a part of the international arms industry; selling guns to the highest bidder regardless of which side the buyer is on. Locke finds himself embroiled in a conflict in an unnamed African country where life and death hang in the balance. His newfound career brings him from the wilds of Algeria to Spain, London and Germany as he tries to unravel the mysteries of Robertson’s life. Along the way, he enlists the help of a young woman (Maria Schneider, “Last Tango in Paris”). The Passenger” almost meanders along its story as Locke uncovers his new life and delves into the cryptic entries in Robertson’s calendar that have the man traveling from one foreign city to another. He has to do the deals that his new business embroils him in while he tries to extricate Locke from his marriage to Rachel (Jenny Runacre). The latter proves far more difficult than David expected when Rachel enlists his editor and friend, Martin Knight (Ian Hendry), to track Locke down. The film becomes an unusual cat and mouse chase that is divided in two. One part is David’s chase around Europe and Africa to unravel Robertson’s life and work (and getting himself in deep trouble). The other is his attempt to escape from what appears to be an unhappy marriage. It is an interesting character study by Nicholson who makes the man an enigma, showing the actor’s burgeoning thesping skills. “The Passenger” was released just after his Oscar-nom for “”Chinatown” and just before Academy win “Just Flew Over the Cuckoo’s Nest.” It must have been heady times for an actor who had just seized the comet’s tail. If you’re expecting to see Maria Schneider give the same, uh, performance as in “Last Tango” you are bound to be disappointed (like a certain film critic friend of ours). The Girl is more a companion for Locke than sex toy and Schneider gives a straightforward, unembellished perf. The rest of the cast is pretty much made up of unknowns to American audiences but flesh things out adequately. Techs are all over the place with Italian lenser Luciano Tovoli capture some beautiful images, especially in the desert locales. The film looks off at times with the print qualities badly mismatched from one scene or another but this could have been a product of poor existing prints rather than shoddy production. The single-take seven-minute climax moves slowly but deliberately and is the film’s payoff. The Passenger,” as I said, meanders but there is an interesting story of changed identity, international arms deals and a failed marriage. Nicholson looks like a youngster but already has the acting maturity that put him in good stead ever since.