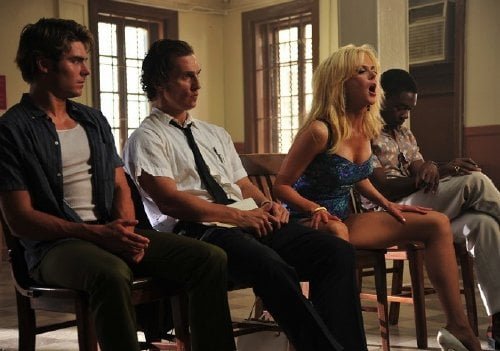 Hilary Van Wetter (John Cusack) was convicted of the brutal murder of local Florida town sheriff Thurmond Call (Danny Hanemann). On Death Row, he becomes pen pals with pretty Charlotte Bless (Nicole Kidman), who knows in her heart that her man is innocent. She enlists the help of a couple of big city reporters from Miami to get to the truth and free Hilary in “The Paperboy.”

Former swimming champion Jack Jansen (Zac Efron, "The Lucky One," "Liberal Arts") is whiling his life away in Lately, Florida, delivering papers for his dad's local rag when his adored older brother Ward (Matthew McConaughey, "Magic Mike") returns home to investigate a possible murder frame up for the Miami Times. Jack is jealous of Ward's regard for his writing partner, Yardley Acheman (David Oyelowo, "Red Tails"), whose British accent and black skin rankle their dad, but he's thrown completely off guard by Charlotte Bless (Nicole Kidman), a local floozy who's hitched her wagon to the accused in "The Paperboy." Cowriter (with the novel's author Peter Dexter)/director Lee Daniels ("Precious") veers wildly from statement making to Kentucky fried trash in this lurid free for all which is the B movie counterpart to another 2012 McConaughey comeback express film, "Killer Joe." But where Joe was directed with a firm hand by William Friedkin, Daniels has lost all control of is material. This is a bad movie that's enjoyable just because it's so jaw dropping. Nicole Kidman, in particular, has thrown herself way out onto a limb, turning herself into a blow up sex doll with little in the way of motivation. And from the depths of this murky swamp comes yet another truly inspired performance from singer Macy Gray ("Training Day") as Jack's maternal stand in and symbol of racial strife, Jansen housekeeper Anita Chester. Daniels wanted Oprah Winfrey. Here's a film about a murder mystery that we care not one whit about. Daniels, employing jittery camera work and devices that give his film a 1960's home movie aesthetic, lets his story sprawl out all over the place without every coming into focus. There're Jack's mom issues. There're dad's women issues. There's the racial undertone within the Jansen family home with Jack's beloved Anita, oddly disrespected the most by W.W.'s (Scott Glenn, "The Bourne Legacy") newest woman, a New Yorker. Suffice to say that Ward's respect for Yardley hides a secret darker than his colleague's skin. Most central is Jack's attraction to the garish Charlotte. Kidman's all false eyelashes, blonde bubblegum hair, skirts up to there. She's all 'bout man 'tracting, so it makes no sense she's fighting for the release of a swampland gator hunter except for the fact that there are women who fling themselves at convicts. As Hillary Van Wetter, a blotchy-skinned John Cusack ("The RaVen") gives his best Nicolas Cage impersonation. He claims to have been stealing sod when the town's Sheriff was gutted and his uncle, Tyree Van Wetter (Ned Bellamy, "The Possession"), backs up his story while gutting a gator. Hmmm, maybe, as Wade says, Tyree's smarter than he looks. But none of this vaguely matters in the end. There's a disastrous fact-gathering road trip that goes off the rails as much as the film does. There's an off the cuff betrayal. Jack leaves dad's wedding to Ellen Guthrie (Nealla Gordon, "Precious") to effect some swampland justice, but he's pretty ineffective. That infamous 'Nicole Kidman pees on Zac Efron' scene? Only there to be out there, some underdeveloped father/son fallout notwithstanding. Kidman's proven she'll take an extreme leap of faith for a director. Now she needs to find a better one. Macy Gray, on the other hand, is apparently impervious.

This is writer-director Lee Daniels’ follow up to his incredible debut, “Precious,” and is a far more ambitious work than the latter. And that is the problem with “The Paperboy” – there are too many things going on. First, there is the reason for the confluence of characters: to bring reporters, local boy done good Ward Jansen (Matthew McConaughey) and Yardley Acheman (David Oyelowo), to the small town, together with Ward’s brother Jack (Zac Efron), Charlotte and, finally, Hilary Van Wetten. This period drama – of the investigation to find new evidence that will free Van Wetter and give the journalists a boffo front page story – is diluted, mainly due to the crush that Jack has, immediately, upon seeing sultry, sexy Charlotte. This side story takes far more precedence than it deserves and is more a distraction from the based-on-a-true-story about freeing a Death Row inmate. More intriguing is the underutilized character Anita (Macy Gray), the maid for the Jansen family we meet at the beginning during an interview. She knows the real story of Hillary and the Jansen family secrets but this interesting well is not really tapped. Star power does not mask the muddle story. Nicole Kidman fills the bill as Charlotte and exudes the raw sex of her character. Matthew McConaughey has proven to be a reliable and versatile character actor and gives a solid if unremarkable performance as Ward. Zach Efron wanders around like a puppy dog as he is consumed with his platonic desire for Charlotte. John Cusack continues his slack-jawed characterizations here as obviously wacky Hilary. The quirky characters could have worked and might have if the story had held one course and not many. I would love to see Anita’s POV story given more shrift.