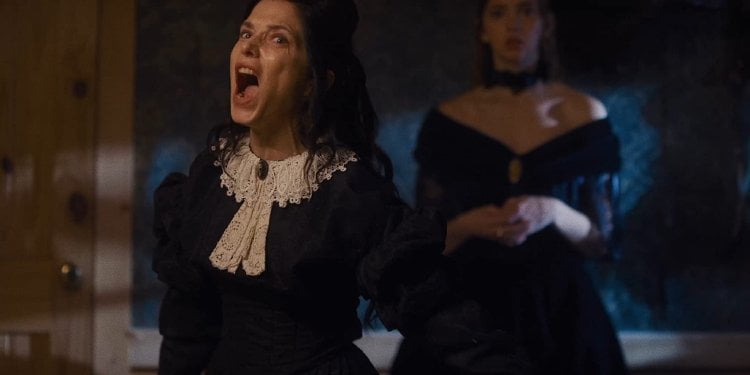 “And travellers now within that valley,
Through the red-litten windows, see
Vast forms that move fantastically
To a discordant melody;
While, like a rapid ghastly river,
Through the pale door,
A hideous throng rush out forever,
And laugh --but smile no more.”   Edgar Allan Poe

When a group of cowboys attempt to rob a train, the leader is shot and their looted chestturns out to contain the shackled and iron-masked Pearl (Natasha Bassett), a young woman we learn was paid for by Cotton Mather (James Landry Hébert, "Once Upon a Time... In Hollywood").  The youngest of the robbers, Jake (Devin Druid, "Greyhound"), declares her an innocent, fighting against the group’s desire to crate her up and complete the sale, but when Pearl leads them into a town uninhabited except for a brothel, they’re in for more than they bargained for behind “The Pale Door.”

Has watching a movie ever actively pissed you off?  Not because it is its intent to enrage you but because it is so inept you resent not only the waste of your time but the waste of funding which could have given a more worthy filmmaker and project a much needed leg up?

Distributor RLJE has had a good track record releasing such genre gems as “Mandy” and “The Standoff at Sparrow Creek” while AMC’s Shudder horror stream service has backed such excellent films as “Prevenge” and “Tigers Are Not Afraid.”  One hopes their inexplicable pickup of this incoherent, amateurish Western/witch mash up is an unfortunate one-off because this is the type of release that will seriously diminish these brands.

We spend the first forty minutes of the film with a group various press releases describe as the Dalton Gang, something I would never have figured out coming in cold.  In addition to Jake, there are Duncan (Zachary Knighton, TV's 'Happy Endings'), Truman (Noah Segan, "Knives Out"), Lester (Stan Shaw), Dodd (Bill Sage), Wylie (Pat Healy, "The Innkeepers") and C-list Annie Oakley wannabe Brenda (Tina Parker) among others.  None of these names match up with those of the actual Dalton gang, so you tell me.  I also couldn’t tell you just what we were supposed to learn during these 40 minutes other than these people are a bunch of outlaws.

When the witchy looking Maria ("Magnolia's" Melora Walters) welcomes the group in, she tells Jake ‘They took me in the day Pearl was born.’   ‘May I ask what happened?’ ‘Come with me,’ she says leading us into a flashback where Cotton Mather does what Cotton Mather presumably did with witches (we presume the present one is a descendent, but again, who knows?).  As members of the gang make their way upstairs with comely women, we alone can see the hooked nose, burnt looking creatures scurrying about the ceiling in what is obviously a composited shot.

You might think things are about to get interesting, but cowriter (with Cameron Burns, Keith Lansdale)/director Aaron B. Koontz ("Camera Obscura") would have had to devise a way to shoot flares out of the screen to engage my interest.  Despite the presence of several respectable character actors, the acting here is wooden (Shaw,  Segan and Druid excepted), the effects shoddy, the story completely uninvolving and the editing a mess.  The production overall has the aesthetic of a 20 year-old History Channel reenactment.

“The Pale Door” is the worst film I have seen in quite some time and should easily retain that qualification for 2020 as a whole.  The best thing about the film is the Edgar Allan Poe stanza which introduces it, a delusional misrepresentation of what follows.

The Dalton gang is planning their biggest train heist every. But, after they kill all the guards and make off with the strong box, they discover not money but a pretty young woman inside named Pearl (Natasha Basset). She offers them a handsome reward if they take her home to the town Potemkin. Instead of a reward, they face a coven of nasty witches in “The Pale Door.”

Cowboys and witches. That seems like a winning combination of possibilities but, in the hands of director and co-writer Aaron B. Koontz, it is a mishmash of ideas that are often disjointed. The storytelling is muddled and most of the characters lack character. This is a problem when there is little to garner sympathy for any of the players.

There is a plotline somewhere in this mess of a western/horror as young Jake Dalton (Devin Druid), it becomes obvious, is the reason for the witches attentions. They need his purity and the rest of the gang becomes fodder for the attacks by the witches of the coven. That is about it for story. Most of the time is spent morphing the witches from seductive, beautiful sirens to hideous crones out for blood.

At 96 minute long, a horror/western should be a breeze to sit through. Here, though, is a ponderous, messy tome that lacks tension, humor and storytelling skill. Too bad. Oh, and the title is from an Edgar Allen Poe poem quoted at the beginning and is the best thing in the movie.

Available in theaters, on Demand and Digital August 21, 2020