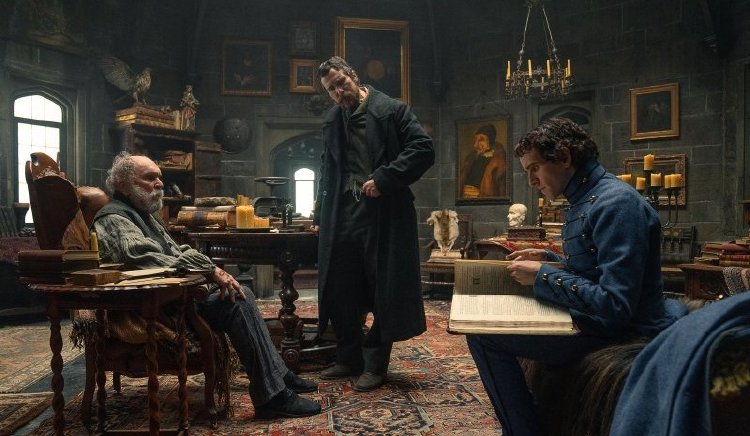 The United States Military Academy at West Point’s Colonel Thayer (Timothy Spall) and Captain Hitchcock (Simon McBurney), wishing for a quick and discrete investigation into not only why 2nd year Cadet Leroy Fry hung himself from a tree, but who surgically removed his heart after his death, hire local detective Gus Landor (Christian Bale).  Quickly frustrated by a code of silence within the Academy, Landor turns to a bullied plebe who fancies himself a poet, Cadet Fourth Classman Edgar Allan Poe (Harry Melling, "Ballad of Buster Scruggs"), as an inside source and unanticipated protégée in “The Pale Blue Eye.”

Writer/director Scott Cooper ("Out of the Furnace," "Antlers") adapts Louis Bayard's novel about a fictional mystery which shaped future works by Edgar Allan Poe from the inside out, two character studies exposing as much about the other as themselves.  The period production, with the Pittsburgh area standing in for upstate New York, contrasts the stark beauty of winter exteriors with the golden glow of candlelit interiors, several historical buildings adding authenticity.  (Note that while the story is fictional, Poe did briefly attend West Point.)

The year is 1830.  Landor begins by interviewing West Point’s Dr. Daniel Marquis (Toby Jones) in West Point’s hospital morgue where the victim’s missing heart appeared to have been surgically removed.  He’ll discover Frye had a falling out with his roommate, but suspicion is cast everywhere, even on the young romantic with a penchant for liquor he’s taken on as his assistant.  Things begin to take eerier turns when, suspecting something Satanic about the crime scene, the duo consult phrenologist and occult specialist Jean-Pépé (Robert Duvall), who tells them about one Henri LeClerc, who left behind instructions for gaining immortality via a ritual involving the human heart.

Bale’s Landor has his own secret history which manifests in a reserved demeanor, but his instinctive investigatory methods, while doubted by those who hired him, are as reliable as they are classic.  Melling’s Poe, meanwhile, while also an outsider of sorts, is his opposite, theorizing wildly (he suggests at first the suspect is a poet because of the symbolism of the heart) and meeting Landor’s carefully chosen and direct language with flowery verbiage.

While Landor has an arrangement with barmaid Patsy (Charlotte Gainsbourgh in one of those ‘what is she doing here?’ roles) Poe falls for Lea Marquis (Lucy Boynton, "Bohemian Rhapsody"), complicating the investigation just as Landor begins to suspect her unusually attached brother and Poe’s upperclassman Artemus (Harry Lawtey, HBO's 'Industry,' "Benediction").  They are the children of Landor’s first interview subject, who is also married to the rather strange Julia (Gillian Anderson).

“The Pale Blue Eye” is studded with references to later Poe works, from the raven which screeches from a snow covered branch to his poem ‘Lenore.’  “The Tell-Tale Heart” is embedded within the mystery as will be “The Fall of the House of Usher,” but the film’s most surprising element will be a last act reveal on Landor’s part.

Director of Photography Masanobu Takayanagi ("Black Mass," "Hostiles") is integral to setting the mood here and I heard faint echoes of composer Howard Shore’s own work from “The Silence of the Lambs.”  Cooper’s film, though, has a somewhat slow build to an overwrought climax and sound is problematic enough that I turned on subtitles.

It is 1830 and a cadet is brutally murdered at the West Point Military Academy on the Hudson. Tired and weary detective Augustus Landor (Christian Bale) is assigned the case, a most peculiar case since the victim’s heart was later removed. He teams up with Cadet Edgar Allen Poe (Harry Melling) to solve the murder, not knowing there are more to come in “The Pale Blue Eye.”

I was a little concerned as I watched the first half of writer-director Scott Cooper’s adaptation of Louis Bayard’s novel of the same name. It starts out as a straightforward murder mystery with Landor called in to investigate the cadet’s death. Then we learn that the victim’s heart was removed after the murder, increasing the mystery of the macabre affair.

Then another, and another, cadet is found dead with the same modus operandi – the heart was removed in both of the new murder victims. The detective, with the perceptive help of Cadet Poe, begins to unravel the bizarre case.

But, things are not as they seem as the true motives of the murders are exposed and, I have to say, I found the twists and turns that play out brought me around. One of the things that bothered me as I watched the story are the dark and murky photography – except when candle light is used beautifully – the muted and muttered dialog and the blatant “moodiness” of the film were less than enthralling. The way the story plays out, though, is enthralling and I did not see the final big twist