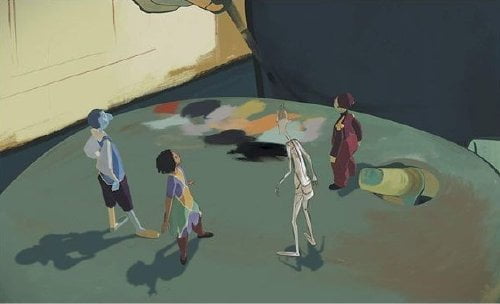 Within an elaborate gilt frame lies a flowerful forest foregrounding a castle on a hill. Emerging from beneath a leafy tree, our narrator, Lola, tells us that if things seem a bit dark, it's because eerie things are about to happen in "The Painting."

Cowriter (with Anik Leray)/director Jean-François Laguionie has created an imaginative parable to teach children about creationism as well as racism, colonialism and many other human evils, framed in a manner that adults will appreciate too. Varying animation styles work for different emotional responses with the paintings themselves, oddly, often the least interesting things to look at on the screen. We quickly learn that the castle is inhabited by the Alldunns, figures in the painting which the painter had completed, who find themselves superior because they were 'consciously created.' They're ruled over by the Great Candlestick, a Venetian Doge-like figure. Lola is a Halfie, one who is missing finishing touches and when another Halfie, Claire, who is in love with Alldunn Roma, attempts to enter the castle, she's turned away. Sketchies, who can 'hide' easily among the Alldunns (somewhat like Black servants in the South), have it worst of all, either hunted or enslaved. Quill, a Sketchie, is devastated when he finds the remains of Gum, thrown over the castle balcony. When Claire runs away, Roma and Lola go in pursuit of her, entering the forest feared by all. They are quite surprised to discover that the 'Flowers of Death' are nothing of the sort. They break through to great beauty, eventually tumbling of their painting entirely into the artist's studio. They hope to find him to get him to finish their painting, but end up involved with other paintings - a battlefield where the Reds fight the Greens, a flirty nude and a self portrait of the artist himself, a gateway to the streets of Venice in full carnival mode. The visuals seem inspired by Italian opera and Venetian history, with harlequin patterns and colors of yellow, red, salmon and blue, although a few surreal dreamlike sequences could have been drawn by the late Cambridge, MA based animator Karen Aqua. The artist's studio has a hyperreal quality. The music complements visual motifs and realistic sound effects draw one into the action. Nominated for the 2011 Animation Cesar (like last year's festival's animation "A Cat in Paris"), "The Painting" is clearly a European animation, something we don't get to see enough of in the U.S.