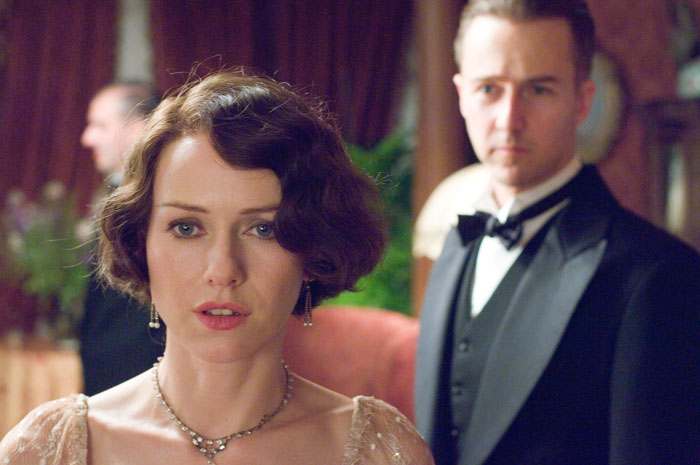 When vane Kitty Garstin (Naomi Watts, "King Kong") overhears her mother praising her younger sister's marital catch while deeming her past her prime, Kitty accepts the offer of prim bacteriologist Walter Fane (Edward Norton, "The Illusionist"), who promises to do anything to make her happy and an exotic life in Shanghai. Bored with her new husband, Kitty embarks on an affair with married British diplomat Charlie Townsend (Liev Schreiber, 2006's "The Omen"), but is astonished by her husband's passion when he discovers the infidelity, offering her the equally unappealing choices of divorce or a trip to a cholera infested interior city in third adaptation of the Somerset Maugham novel, "The Painted Veil." Screenwriter Ron Nyswaner ("Philadelphia") has seemingly staked his adaptation on Kitty's famous line 'As if a woman ever loved a man for his virtue,' a line Naomi Watts delivers with understated nonchalance. When first married, Kitty Fane doesn't bother to interest herself with her husband's career, instead finding his work an obstacle to her own amusements, but once he's shocked her out of her own shallow head, Kitty's personal growth is spurred by her husband's virtues and she finds she comes to love this man. Initially, director John Curran ("We Don't Live Here Anymore") keeps our focus on Kitty. We watch as she accepts Walter's proposal with guarded enthusiasm then finds Shanghai thin on frivolous entertainments. Walter accepts a dinner engagement Dorothy Townsend (Juliet Howland, "Iris"), a woman Kitty disparages, but she is enthralled by the Chinese Opera the Townsends take them to, especially when Charlie intuits Kitty's feelings to whisper a biographical interpretation in her ear. The focus begins to shift to Walter when Norton so ably demonstrates how still waters run deep. Fane's fury that the woman he recognized as selfish and shallow when he married her should nonetheless so easily betray him astonishes Kitty, even though she is quite aware that he loves her. She is astonished again when Walter gambles and wins, offering her a quiet divorce on the condition Townsend divorces as well to marry her. When she discovers the love she took for granted was spurned for empty promises, she agrees to accompany her husband to Mei-tan-fu, defeated. Norton and Watts, who also produced the film, are exquisitely paired with their roles, seesawing over that charged, pivotal event. After the arduous journey (beautifully photographed by Stuart Dryburgh, "The Beautiful Country"), Norton's prissy affability turns to cold disdain while Watts shows Kitty's education slowly opening her eyes. This begins with a conversation with their lone neighbor, the local consul Waddington (Toby Jones, "Infamous," so much better and deeper here), whom she attempts to use as a mail courier to contact Townsend. Upon seeing the name, Waddington innocently gossips about the man's reputation and his wife's dismissal of his 'second rate' lovers. Waddington proves even more of an education when Kitty's initial impression of him as a libertine proves untrue. Curran intercuts Kitty's days with Walter's, showing the man's determination to discover the cause of the disease that is killing hundreds, and when Kitty begins to work with the children in the convent, Norton shows Walter cautiously beginning to melt. Watts's eyes begin to shine with admiration when she hears her husband's work praised by the nuns she has begun to love and she takes a stand to fight for her man. When the two finally come together in passion, the scene is charged. Curran is not only blessed with the talents of his producer/stars however. The marital ying and yang is matched by the opposing motivations of Colonel Yu (Anthony Wong Chau-Sang, the "Infernal Affairs" trilogy), who is charged with keeping order and assisting Fane in an environment hostile to foreigners while the convent's Mother Superior ("The Avengers'" Diana Rigg) is converting the town's orphaned children to Christianity while acting as marital advisor to Kitty (Rigg is marvelous and has a wonderful speech about the different shading duty takes when combined with love). Toby Jones echoes Kitty's men, setting expectations one way, then proving far more admirable. Jones gives the character a deep world weariness that explains his acceptance of a life tucked away. Li Feng offers sentimental comic relief as Sung Ching, the chubby soldier assigned to keep the initially resentful Kitty from harm. Schreiber, who became engaged to Watts after filming, is dangerously convincing as the calculating, manipulative diplomat. The film's visual splendor is about more than scenery as Dryburgh attains first character definition, then emotional wallop with early and late closeups of Walter's bare foot. Alexandre Desplat's ("Birth," "The Queen") score echoes the film's characters, surface prettiness not quite covering an insistent, agitated piano.