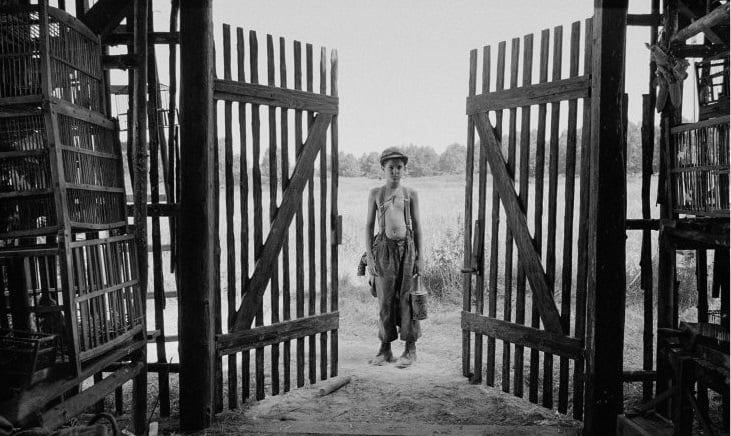 The old woman whose farm he’s living on, Marta (Nina Shunevych), begrudges his welcome, telling him it’s only temporary, but after she dies and the lamp he drops in horror upon discovering her burns the buildings down, young Joska (Petr Kotlár) is left to fend for himself in central Europe.  It is WWII and the boy is alternately turned over to the Nazis as a Jewish prize or abused by degenerate exploiters.  Even those who seem kind, like bird catcher Lekh (Lech Dyblik), give lessons in cruelty as we see with his allegorical exhibition of “The Painted Bird.”

The Czech Republic's submission for the 2020 Foreign Language Oscar made the shortlist of nine, but wasn’t one of the five nominees, one presumes for the unrelenting dehumanization of its protagonist rather than any lack of artistry.  Writer/director Václav Marhoul’s faithful adaptation of Jerzy Kosinski's controversial 1965 novel (Kosinski initially claimed it was autobiographical and its authorship has even been questioned), a book that once read is never forgotten, is a stunning achievement for those willing to navigate the opposite of escapism.

Marhoul is a master of ‘show don’t tell,’ somehow suggesting Marta’s death by the way she washes her feet in a basin.  We are not told Joska’s situation, but can deduce it from photographs and the reception he gets when he wanders into a town after Marta’s death.  Superstitious townspeople proclaim him a demon, ready to drown or burn him, until Olga (Alla Sokolova) declares him a vampire but also offers to buy him, Joska’s first of many indentured servitudes.

He will next land with a Miller (Udo Kier) who saves him from drowning but whose household is anxiety personified as his wife (Michaela Dolezalová) flirts with his worker and is beaten relentlessly (the worker’s fate is far worse).  A mewling kitten increases the sense of dread, animals’ lives, like that titular bird, valued as much as Joska’s, the boy’s compassion their only harbor.  Lekh may paint one to encourage a show as others of its kind peck it to death in the sky, but at least his display of sexuality is relatively healthy, cavorting in a field with the lusty Ludmila (Jitka Cvancarová), who brings him a caged bird, the only one to grieve her horrifically brutal death at the hands of outraged cowherds’ wives.

Ludmilla’s is the first of many rapes in a film which also features pedophilia, incest and bestiality.  Ironically one of the greatest acts of compassion shown Joska will be at the hands of a Nazi, Hans (Stellan Skarsgård).  An old, ailing priest (Harvey Keitel) is kind to the boy, yet delivers him into the hands of one of his worst abusers, Garbos (Julian Sands), a parishioner of bad faith (and a prescient observation on the Catholic Church).  Labina’s (Julia Valentova Vidrnakova) sexual deviance knows no bounds, perverting the young boy’s idea of love.  A Russian soldier, Mitka (Barry Pepper), will teach him an ugly lesson of revenge before delivering him to an orphanage.  We worry that this young boy, who has witnessed acts of cruelty beyond comprehension, may be beyond redemption himself.

There is bleak beauty in cinematographer Vladimír Smutný’s black and white widescreen (2.39 : 1) lensing.  One long shot of horse drawn carts delivering the wrapped remains of smallpox victims to a riverbank adorned by bare trees is like primitive folk art.  The film is also a marvel of casting with its stars international (Keir, Skarsgård, Sands), American (Keitel, Pepper) and local (Dyblik, Cvancarová, Vidrnakova).  Young Kotlár carries the heavy burden that is this film with little dialogue.  The film is chaptered by the various people Joska survives often transitioning with solitary observational moments and is well paced, its 170 minute running time only onerous in its grim subject matter.

Reunited with Nikodem (Petr Vanek, "Child 44," "Serena") in the film’s final moments, Joska acts out his fury over his abandonment in the face of Nikodem’s anguish until he recognizes a symbol of suffering that becomes a bond of understanding.  After illustrating the worst of humanity, Marhoul lets in a sliver of light, the possibility of love.  “The Painted Bird” is astonishing.