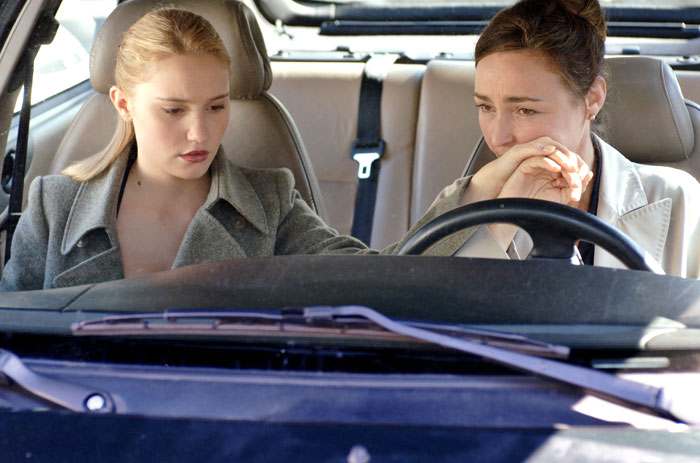 Young Mélanie Prouvost (Julie Richalet) seems destined to rise above the small town, blue collar world of her parents on the wing of her piano playing talent, but when her mother (Christine Citti) takes her to audition for a prestigious school, the insensitive behavior of one of the judges, world renowned pianist Ariane Fouchécourt (Catherine Frot, "The Dinner Game," "The Trilogy"), causes the girl to stumble. She gives up the piano. Ten years later, Mélanie (Déborah François, "L,Enfant") works her way into the graces of Ariane's husband Jean (Pascal Greggory, "La Vie Promise," "Gabrielle"), whose law firm supports his wife's career, then into his home to watch their young son, budding pianist Tristan (Antoine Martynciow). Like a bird of prey, Mélanie swoops in and seizes her change to become Ariane's professional assistant, "The Page Turner."

Belgian director Denis Dercourt, who cowrote the screenplay with Jacques Sotty, has made a quietly effective thriller right out of the Claude Chabrol catalog. While we know all along that Mélanie is hell bent on revenge, the insidious methods with which she enacts it are nowhere near as obvious as her desired end. Déborah François, so vibrant in last year's "L'Enfant," may never let us get inside Mélanie's head, but watching her cooly calculated moves is akin to spying a spider weaving its web.

Mélanie's crisp efficiency soon earns the admiration of Jean's secretary, then Jean himself, and when she is greeted by Ariane, who does not recognize her, the good words which have preceded her gain her a wary acceptance. She's accepted quickly by Tristan and proves herself useful in other ways as well, her father's butchery background coming to play in the kitchen for example. But it is her perfect musical timing and non-disruptiveness that Ariane, who suffers severe stage fright, most values after a series of unsuitable page turners. With Mélanie at her side, the high strung Ariane can almost relax in the face of an upcoming high profile radio audition.

We, the audience, see the web being cast rather immediately, however. In a sequence that recalls the original noir "Cat People," Mélanie walks down a lengthy hallway, dark except for the flickering reflections from the indoor pool where Tristan works at holding his breath underwater. Mélanie helps the young boy break his record by holding his head down. She also assists his piano practice by counteracting Ariane's instructions to keep his count slow so to avoid tendonitis. Virginie (Clotilde Mollet, "The Red Violin," "Amélie"), Ariane's violinist, is suspicious of the young page turner but when her husband, the trio's cellist Laurent (Xavier De Guillebon, "L'Auberge espagnole," "The Da Vinci Code"), is brought to hospital with a severe foot injury caused by his instrument's spike, he obviously cannot admit to his wife that it was retaliation for unwanted (yet courted via non-resistance) sexual attentions towards Mélanie.

Dercourt continues to surprise as Mélanie, not content to just upset a career, sets her traps to destroy an entire life from every angle. Déborah François elicits no sympathy in her character's endeavors, just as her younger reincarnation's decision to stop pursuing her dream should her audition fail seem to come from a cold place. The one to watch here is Frot, whose destruction is advanced with a nervous fragility that seems to come from interior rather than exterior sources.

"The Page Turner" has the same creepy build as "The Hand That Rocked the Cradle," but without that film's hysterical madness. It's a satisfying, if chilly, little thriller.

Gifted young pianist, Melanie (Julie Richalet), flubs an important audition because of the thoughtless act of the board’s chairwoman. Ten years later, Melanie (Deborah Francois), is an intern at a law firm where she agrees to take care of the son of one of the partners. The man’s wife, it turns out, is the same woman who ruined her chances at a music career in “The Page Turner.”

The young daughter of a small town butcher, Melanie Prouvot (Julie Richalet), is a truly gifted pianist. She has a good chance to enter the Conservatory and auditions before the judging panel, headed by a famous concert pianist. The chairwoman behaves thoughtlessly when she allows an autograph hound to barge in, interrupting the proceedings and totally distracting Melanie. The unfortunate experience causes the girl to give up her beloved piano. Ten years later, while interning at a law firm, grown up Melanie (Deborah Francois) meets one of the partners, Monsieur Fouchecourt (Pascal Greggory), the husband of the woman who destroyed her musical ambitions. The young woman’s competence and loyalty soon attracts her to Ariane (Catherine Frot) and Melanie ingratiates herself into the Fouchecourt household to care for their son and, also, become “The Page Turner.” Director Denis Dercourt must have spent a lot of his spare time watching the films of Alfred Hitchcock and Claude Chebrol. “The Page Turner” does a solid job with its tale of revenge for a life ruined by a thoughtless act. It does not hit you over the head with its sinister edge as Melanie’s agenda unfolds. But, she may walk like an angel, but there is a vengeful devil inside as she insinuates herself into the Fouchecourt family, particularly with Ariane.

"The Page Turner” is a low-key thriller that deals mostly on a psychological plane. There is little by way of action but this works as Melanie’s plans unfold before us. It is not a keep-you-guessing kind of story but one that, you know, will end in vengeance attained. The getting there is the thing that appeals most as you wonder just how Melanie will exact her pound of flesh.

Acting is decent with Catherine Frot giving a solid perf as the phobia-challenged concert pianist who comes to rely on her assistant, Melanie. Deborah Francois plays the vengeful Melanie with little emotion as she does what she has to do to destroy her nemesis. It is a two hander cat and mouse game with only you, the viewer, and Melanie privy to what is coming.

"The Page Turner” is a good, though not great, thriller that does not as much surprise as it does satisfy with its outcome.