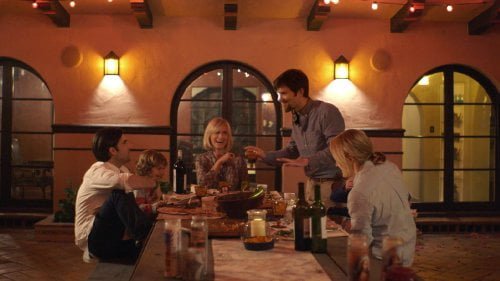 Alex (Adam Scott) and Emily (Taylor Schilling), and their son RJ (R.J. Hermes), have moved their lives from Seattle to LA. They know no one until, one day when they take RJ to the park to play, they meet another dad, Kurt (Jason Schwartzman). RJ and Kurt’s son Max (Max Moritt) hit it off, prompting Kurt to invite his new friends for family pizza night, which unexpectedly becomes “The Overnight.”

Having just moved to L.A., Alex (Adam Scott, TV's 'Parks and Recreation') and Emily (Taylor Schilling, "The Lucky One") are eager to kickstart a new social life. The intriguingly offbeat Kurt (Jason Schwartzman, "Rushmore," "Listen Up Philip") introduces himself in the park when his son Max (Max Moritt) takes a shine to Alex and Emily's RJ (R.J. Hermes), then impulsively asks them over for family pizza night. The new couple are overwhelmed by Kurt and his French wife Charlotte's (Judith Godrèche, "Ridicule," "Stoker") wealth and sophistication and charmed by their down to earth hospitality, but Emily begins to sense a hidden agenda as their early evening turns into "The Overnight." Writer/director Patrick Brice ("Creep") knocks us off balance right from his opening scene and continues pulling the rug out from beneath our feet every time he's let us relax. I haven't laughed out loud so long and often at any comedy so far this year. Initially, it is Alex who's more flustered than Emily when they first set eyes on the gated mansion they've been invited to, Alex declaring the cheap wine they've brought as 'like what 19 year olds cook with.' A scratched off label and lie about home made organic later and they're oohing over the home Kurt's not only extensively built out but added his own desalination system to. Kurt's achievements keep piling up. After convincing their new friends that they're in a 'French' house and so should put the children to bed and continue their evening, he gets the boys to sleep with a laser-light show lullaby! After imbibing in some pot, it's only when Emily turns the spotlight towards Charlotte's accomplishments that things take an uncomfortable turn... While Emily's warning lights have started going off, Alex is bonding with Kurt so much he gets over his deepest seated insecurity - his incredibly small penis - for a nude dance for the ladies, Kurt's endowment a study in contrasts (before anyone thinks Scott incredibly brave or Schwartzman hung like a horse, rest assured that they are wearing really convincing prosthetics). Emily walks a tightrope, not wanting to go where she thinks Kurt and Charlotte might be taking them while not wishing to kill her husband's transcendent high. Then Charlotte convinces Emily to accompany her on an errand under false pretenses, allowing her to witness something which both fascinates and repels her. The biggest revelation is beginning to be unveiled - Kurt and Charlotte may have reached out to solve insecurities and needs of their own. Brice has beautifully matched his cast to his ingeniously devised screenplay, Scott's likable ordinariness bouncing off Schwartzman's eccentric overachieving, Schilling's clear-eyed Everymom fighting attraction to the exotic Godrèche's insistent flirtatiousness. Brice has a great command of his material, taking it to the edge, then pulling back, then going where you'd expected when you least expect it. The director also keeps his film visually interesting, creating varied yet connected spaces within Kurt's estate, some open and airy others quite intimate. "The Overnight" is the real deal, a smart, funny and insightful adult comedy. I'm looking forward to what Brice does next. Grade:

This is the second film for writer-director Patrick Brice and it is a deft four-hander about a night of revelry and revelation. Adam and Emily are strangers in a strange land when they move to LA to start a new life. They have no friends in the city so when urbane Kurt invites the family to join him, his wife Charlotte and son Max on their regular play date, they jump at the chance. Things start off well enough with the kids playing and the adults chatting. Kurt, it turns out, is a jack of all trades. He is an inventor, an architect, photographer, artist, musician and painter and Alex is both fascinated and intimidated by his new friend. Until, that is, Kurt breaks out his bong and the two couples let their hair down. Things do not go as expected and Brice weaves a fascinating story of what happened one night. The strongest suite in “The Overnight” is the chemistry between Adam Scott and Jason Schwartzman as Alex and Kurt. Alex’s insecurities are matched by Kurt’s self-assurance as the night plays on. Emily and Charlotte, too, have a forming relationship but the focus of the film is on the men. There is an element of “Who’s Afraid of Virginia Wolfe” in “The Overnight” but without that film’s undercurrent of venom. Patrick Brice and his talented cast bring together a well-made tale about human nature.