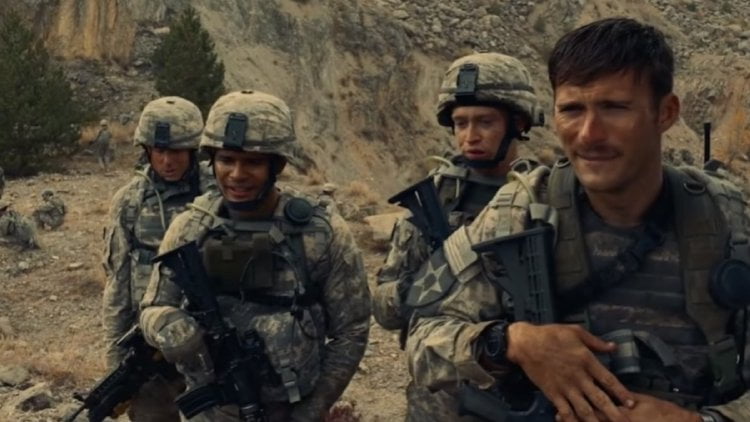 Even before the horrific Battle of Kamdesh, it was said that Keating, located on Afghanistan’s border with Pakistan and open to the mountains rising all around it, should have been called Camp Custer.  In 2006, Staff Sergeant Clint Romesha (Scott Eastwood), Staff Sgt. Justin T. Gallegos (Jacob Scipio), Michael Sousa (Scott Alda Coffey), Pfc. Zorias Yunger (Alfie Stewart) and Sgt. Josh Kirk (Jack Kesy, TV's 'Claws,' "12 Strong") arrived and quickly learned gunfire could rain down upon them at any time.  After a promised July 2009 shut down was postponed until October, only two of them would outlive “The Outpost.”

Director Rod Lurie ("The Contender"), a West Point graduate and veteran, pays homage to Bravo Troop 3-61, who would be outnumbered by a factor of over seven to one in a position best described as ‘fish in a barrel’ in one of the worst battles of the Afghan War.   Working on location in Bulgaria with a strong cast in which Lurie’s included three of the actual veterans of Kamdesh, the filmmaker excels with performances and production, the film’s weakness lying with "Patriots Day's" Eric Johnson & Paul Tamasy’s adaptation of Jake Tapper's book where too often dialogue feels like pronouncement and where, as is often the case with large ensembles, some characters are more well defined than others.

The film’s first half establishes characters using comedy and conflict as well as demonstrating the post’s purpose.  Sgt. Joshua Hardt (Jack DeVos) catches Yunger using his wife’s picture for sexual gratification.  Romesha tells Staff Sgt. Ty Carter (Caleb Landry Jones) he isn’t liked and isn’t trusted (immediately foretelling his heroism – both men will be awarded the Medal of Honor). First Lt Benjamin Keating (Orlando Bloom) meets with the locals, notoriously suspicious of outsiders, to gain their trust and their weapons, COP Keating’s treacherous location intended as a stopgap for weapons coming in from Pakistan.  And not only is the outpost’s site difficult to defend, it is difficult to travel in and out of, as we see the tires of army vehicles overlapping roads edged with sheer drops.

Keating is recalled and replaced by Cpt. Sylvanius Broward (Kwame Patterson), an officer so by the book he demands PIDs while his troops are obviously under fire.  When news comes that the army is ‘closing shop’ at Keating, First Lt Andrew Bundermann (Taylor John Smith, HBO's 'Sharp Objects') takes command and his tenure, far from a wind down, will be harrowing.

Lurie’s given over the second half of his film to the battle and with the exception of cutaways to Bundermann begging for air cover and its (painfully slow) arrival, we are right next to these men under impossible odds and constant assault.  Romesha keeps regrouping, always pushing back.  Carter retrieves the injured Pfc. Stephan Mace (Chris Born) from a completely unprotected position.

Eastwood, Landry Jones, Kesy, Scipio, Bloom and Smith stand out from the pack both as outsized personality and importance to the plot.  The Bulgarian location ably stands in for Nuristan (the same area where Kipling set his ‘The Man Who Would Be King’), Lurie attaining an immediate reaction of dread with our introduction to his outpost.  The film’s editing can be slack, an explosion set up with all the subtlety of a figure skater entering an axel jump, the more stilted dialogue given too much padding.  The film’s epilogue recounts the fates of Troop 3-61, including all the honors bestowed upon them, as well as the results of an army investigation calling Keating ‘obviously indefensible.’

In 2009, at the remote Combat Outpost Keating in Afghanistan near the Pakistan border, a team of American/Afghan/Latvian coalition soldiers did battle against Taliban forces nearly 10 times their strength to take back “The Outpost.”

To my surprise, this well-crafted and well-acted ensemble war flick is the product of CNN’s Jake Tapper’s 2012 book, The Outpost: An Untold Story of American Valor. We meet the US Army combat team as they head into their new post – PRT Kamdesh, located in a valley at the base of three mountain peaks. Their first observation is that, in the exposed camp, they are sitting ducks.

The PRT – Provincial Reconstruction Team – was designed to afford the Afghan Army, with US troops “assisting,” to stop the flow of weapons through Pakistan to the Taliban. But, taking the low ground, with insurgents surrounding the camp from above, is a military strategy destined for failure. The American troops, and their coalition allies, dub the base “Camp Custer,” for obvious reason.

The troop deployment to the base is not just about the movement of men in war. Here, time is taken to establish the many characters – there were 53 US soldiers in the battle – and inform of their bravery and heroism.

I came away, after watching “The Outpost,” with two very separate thoughts. One, the US armed forces are populated by some incredibly brave men and women who will put their lives on the line for their fellow warriors – and, by extension, us. The other was on the irresponsibility of the US government to send our troops into a place that the soldiers themselves call Camp Custer.

Rod Lurie directs the adaptation of Tapper and Paul Tamasy’s true life story, with scripter Eric Johnson, and employ a huge ensemble cast. While the film’s “stars” are Scott Eastwood, Caleb Landry Jones and Orlando Bloom, it is a true collective effort as many of characters – all based on real soldiers in arms – are given fully-honed personae.

The sobering statistics of the battle – eight American soldiers killed and 27 wounded – are countered by the exceptional bravery on display – many medals for valor, including two Congressional Medal of Honor recipients, were awarded to the soldier for their bravery - and 27 Purple Hearts.

This straightforward and honest telling of a modern battle waged by our warriors in the fight against terrorism puts our troops in an admirable light. Not so admirable are the policies that would put our fighters in unnecessary harm's way – Camp Custer was abandoned and destroyed shortly after the battle.