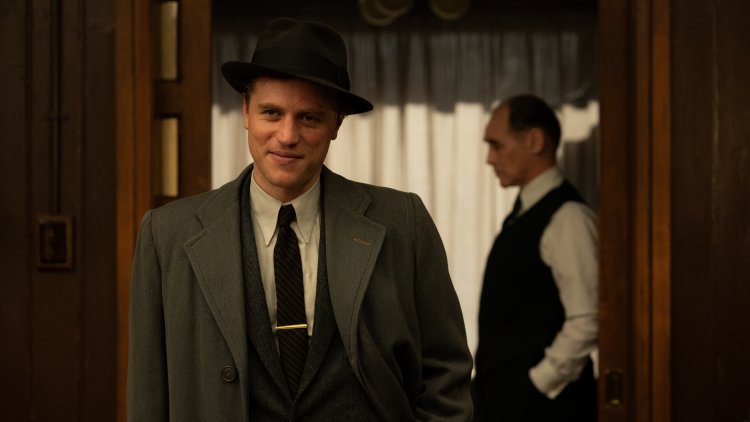 In 1958 Chicago, the owner of L. Burling Bespoke is proud of a craft learned over decades on London’s Savile Row.  Don’t call Leonard (Mark Rylance, "Bridge of Spies") a tailor, because, he will tell you, that is a job anyone with a needle and thread can assume.  He is a cutter.   But his narration about the complexities behind the construction of a two piece suit segues into an analysis of taking the measure of a man through his appearance and we will be surprised to learn that the quiet Brit counts many mobsters among his clientele in “The Outfit.”

"The Imitation Game" screenwriter Graham Moore makes his feature directorial debut with a cleverly constructed script (with Johnathan McClain) shot on a London sound stage during the pandemic.  Production designer Gemma Jackson ("Aladdin," "The Gentlemen") has made the most of Leonard’s shop, fashioning a three tiered chamber featuring a reception area, where Mable (Zoey Deutch, "Zombieland: Double Tap") greets customers, a showroom and the work room tucked away in back.  Its more humble looking exterior reveals the artificiality of it all and keeping the action within its confines makes it feel like a filmed stage play, but Moore’s tale, like Chinese puzzle box crossed with Russian nesting dolls, and his star’s expertly calibrated performance will keep audiences rapt.

The first outsiders we meet are the confident Francis (Johnny Flynn, 2020's "Emma") and entitled Richie (Dylan O'Brien, "The Maze Runner") who is nonetheless insecure even as the son of mob boss Roy Boyle (Simon Russell Beale, "The Death of Stalin") because of Francis’s favored status.  They affectionately refer to Leonard as ‘English’ while treating his shop as their own, striding into the back room to access a dropbox Leonard pretends not to notice.  But this cutter is quite aware of everything as first evinced by his attempt to gently steer Mable away from an attraction to Richie in favor of a watchmaker’s apprentice.  Alas, this girl has her sights set on traveling the world, not any kind of apprenticing.

Things kick into a more dangerous gear after hours one evening when Francis barges in propping up Richie who’s been shot in a turf war with the rival LaFontaine gang.  He’s also got a suitcase which he says contains something that both the LaFontaines and the F.B.I. are after.  Demanding that English sew Richie up, Francis then informs him there is a rat in their midst and the suitcase contains a recording that the F.B.I. made with some newfangled device.  He’s going to entrust English with it while he goes out to find a device to play it on, stating that it will also reveal just where it was recorded.  Before the evening is out English will be hiding a dead body in a trunk and trying to protect Mable while juggling not only Francis and Richie, but Mr. Boyle and his goon Monk (Alan Mehdizadeh) and Violet LaFontaine (Nikki Amuka-Bird, "Old") while the streets fill with Chicago blue.

It is interesting to see a mostly British cast and crew take on an American gangster tale, Deutch providing the biggest blast of Midwestern authenticity.  She also proves a surprisingly good counterpart to Rylance, the concerned yet rebellious daughter figure to his paternal protector.  Their interactions are a delight, their relationship illustrated as each folds silk pocket squares, she sloppily, he fastidiously.  Flynn, his face roughed up with some made up facial scarring, is oddly effective with a performance that’s a bit off from ‘Chicago gangster,’ confidence bringing it home.  But this is Rylance’s film and the actor gives a master class sparring with Beale, flinching when the mob boss reaches for his cutting shears, then covering by making an offering of them, defusing their lethal properties and the other man’s interest.

Leonard (Mark Rylance) was once an established tailor on London’s prestigious Savile Row. He transplanted to Chicago because of the war and the tragic loss of his wife and daughter. Now, he custom-makes his fine suits for the members of a vicious family mob in “The Outfit.”

Pay close attention as you watch this intricate story that leads you into one mindset and direction, then changes in a way that kind of made my head spin with its clever twists and turns.
The scion, Richie (Dylan O’Brien), of the Big Boss, and his gangster buddy, Francis (Johnny Flynn), show up on Leonard’s doorstep and demand a “favor.” Suddenly the quiet and diligent tailor, or “cutter,” is thrust into a deadly game of deceit and power grabbing by the young men as they jockey for notice from the Boss, Roy (Simon Russell Beale). The question is who is in control of the downward spiraling and violent-laden situation?

Mark Rylance gives a nuanced performance similar to his Rudolph Abel, opposite Tom Hanks in Steven Spielberg’s “Bridge of Spies (2015),” with his quiet resolve and taciturn manner. Similar, yes, but completely different, too, testifying to the actor’s skill and talent.
The tiny supporting cast is also quite good with Zoey Deutch, as Leonard’s loyal assistant-with-a-secret, Mable, and O’Brien and Flynn offering suitable danger for the not-so-easy-to-read tailor.

Co-writer, with Johnathan McClain, Graham Moore makes his directorial debut and does a fine job telling the story and mustering a strong ensemble performance. And, it keeps you guessing right to the end. You also, early on, get a tutorial on the nuts and bolts of making a suit and it is almost meditative.