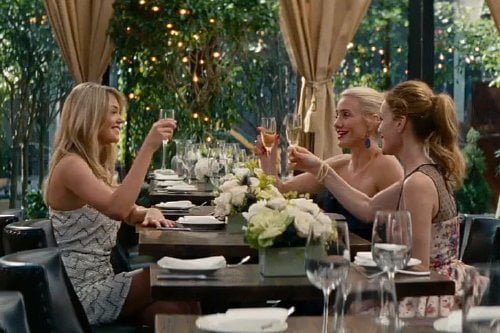 Carly (Cameron Diaz) finds out that her boyfriend is married. When she meets his wife, Kate (Leslie Mann), she realizes that the cuckolded woman is not her enemy, but her friend. Then, they learn that he is cheating on them both, with Amber (Kate Upton), and the three decide to join forces to get revenge and punish the philandering Mark (Nikolaj Coster-Waldau) in “The Other Woman.”

When New York City lawyer Carly Whitten's (Cameron Diaz) boyfriend begs off meeting her dad Frank (Don Johnson, "Django Unchained") for drinks because of a plumbing problem, Frank encourages her to head out to his Connecticut home. Clad is a sexy outfit with a plunger for a prop, Carly's taken aback when a woman answers the door and says she's Kate King (Leslie Mann, "This Is 40"), Mark's (Nikolaj Coster-Waldau, "Mama," HBO's 'Game of Thrones') wife. Kate begins to stalk Carly, but two nights of drunken exchanges find them fast friends and when they spy Mark with the younger Amber (supermodel Kate Upton, "The Three Stooges"), they decide to teach him a lesson by joining forces with "The Other Woman." First time screenwriter Melissa Stack leans heavily on 1980's "Nine to Five," in which three women get revenge on their boss, as her outline and piles on every hoary cliche in the book, but director Nick Cassavetes ("The Notebook," "My Sister's Keeper") has gotten such a hilarious performance from star Leslie Mann as well as a sparkling debut from singer Nicki Minaj (as Carly's unfiltered secretary Lydia) that it makes the movie almost worthwhile. You'll have no trouble figuring out where this is going. In fact, you may as well keep a checklist. Spot the intendeds for two of the three women - check. The old 'spike the guy's drink with Ex-Lax/swish his toothbrush in the toilet/replace shampoo with hair remover pranks? - check. Discover the ditzy wife's the brains behind the husband's business - check. The film is also from the school of Nancy Meyers, where everyone's fabulously dressed (Kate's like are Lily Pulitzer Stepford wives), live in chic NYC penthouses or palatial suburban spreads and hang out in the Hamptons. First billed Diaz is merely OK here, often over exaggerating the comedy and Upton's still not ready for prime time (but may put male butts in seats). Coster-Waldau is too shallow to rate as the guy so many gorgeous women fall for and as Kate's brother who sets his eyes on Carly, Taylor Kinney (TV's 'Chicago Fire') is a bit stiff, albeit agreeably charming. Johnson's amusing as Carly's eccentric dad. But Mann is on fire here like she's never been before, a 200-words-a-minute flake whose neediness is actually endearing. Minaj, whose only screen credit has been vocal work in an "Ice Age" sequel, can zing with the best of them (and Cassavetes is wise enough not to overutilize her). "The Other Woman" isn't a good movie, but it is a setting for Mann's sparkling comedic turn. Whatever pixie dust was sprinkled to get this performance should be handed over to better filmmakers pronto.

There is one thing that makes “The Other Woman” more than a cliché of women striking back because of their man’s infidelity (or whatever flaw he has). In this case, it is Leslie Mann as Kate, the cheated on wife of Mark who finds out about his fooling month’s long affair with Carly. But, since he also duped his “mistress,” the two woman join together to exact their vengeance on the no-good, cheating husband. Then, sticking to cliché, they learn he has another mistress, Amber (Kate Upton). Mann, a comedic actress I have not been fond of, gives a tour-de-force physical performance, overshadowing her co-stars whenever she is on the screen. Kate is needy, affectionate, kind and, at times, a complete airhead and Mann puts her own spin on her likable (in a ditzy way) character. The ostensible star, Cameron Diaz, is the second banana, Carly, whose job is to feed Kate the lines that trigger her nutty behavior. Kate Upton is very pretty as Amber but never gets or gives dimension to the character. Men are of two types: total jerk, Mark, and totally sensitive hunk, Kate’s handsome brother Phil (Taylor Kinney). Besides Leslie Mann’s terrific performance, there are no surprises in the story by first-time feature writer Melissa Stack which harkens back to such femme-empowered films as “Nine to Five.” There is nothing new here and director Nick Cassavetes puts no identifiable impression on the by-the-numbers comedy. Mann’s performance brings the film up a grade.