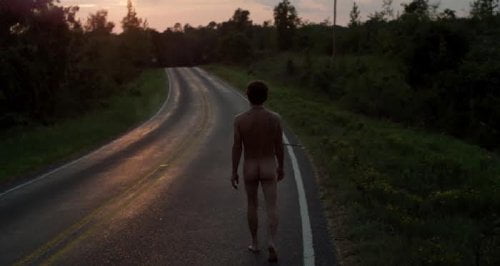 In West Monroe, Louisiana, ex-con Mark Kelley ekes out a living cooking meth and working at a scrap yard for $20 a day. He and most of his loved ones are addicts, angry at the system that's left them behind. There is another community, a paramilitary group training to keep their families safe and be prepared to defend themselves from that same system. They are "The Other Side."

Cowriter (with Denise Ping Lee)/director Roberto Minervini has found a forgotten pocket of America that exemplifies the rage evident in the 2016 presidential race and, at least in the section devoted to Mark, it is a surprisingly complex picture. Mark is a poor white man whose ex-con status makes him ineligible to vote or own a gun and he's mad as hell about it, believing his rights are being taken away. He hates Obama (a position held more disturbingly by the militia men - more on that later). It may be easy to make a snap judgement on an ex-con dealing drugs, but the man Minervini follows is pretty sharp, has an intense relationship with his girlfriend Lisa (they stare into each other's eyes with deep communion) and is supportive of his sister, mother and grandmother, even if that means he's giving his sister and nephew drugs on credit. After a brief interlude of armed men wandering through a forest (one, in a Ghillie suit, looks like he's roamed in from "Uncle Boonmee"), Minervini's camera finds Mark, naked, asleep on the side of the road, presumably after a hard night of partying. As the film progresses, one becomes confused about the film's classification as documentary, Minervini so immersed in this world he shoots Mark and Lisa's lovemaking. Yet we only feel his presence once, near film's end, speaking off camera. He follows Mark breaking into a high school with a friend, their only motive apparently entertainment. Mark equates a schoolroom chart on capitalism to his meth business. A group of old, toothless men sing songs, one offering a whisky bottle to a young girl, another cradling her comfortingly after his play becomes too rough. He's the guy who gets Mark a day job, their work ethic in evidence, the man who peals twenties off a wad at the end of it clearly exploiting them. Mark shoots up a heavily pregnant stripper in a club's back room before she takes the stage, performing fully nude. As most who see this film will be far removed from its subjects, one begins to wonder just what percentage of our populace lives like this. It is easy to understand the despair and feeling of abandonment. Mark's love of his mother is palpable as he tucks a flower behind her ear. Later, his grandmother boogies down in a jazzy red sequined fedora. The family celebrates Christmas Eve outside an RV on a picnic bench, Mark's niece breaking out into 'O Holy Night.' Minervini's compositions are beautiful even amidst squalor. But the natural beauty of the area also shines through, the camera placed above the back of Mark's head as he paddles through a swamp, the world reflecting back. His film changes tempo when he crosses to the other side. A leader of armed men at first seems reasonable as he tells his trainees the U.S. has no right to tell the Middle East how to live their lives. Then he starts talking about revolution. 'We're out here preparing for the worst scenario,' he tells men forming and reforming while shooting live ammo. A wild gathering takes place near a river. There's a wet t-shirt contest. A woman performs fellatio wearing an Obama mask. The men put the presidential facsimile in the back seat of a car, spray painted 'Obama sucks.' After blowing it up, they continue to destroy it. 'God Bless America!' Whoa. Minervini's film is both compassionate and scary as hell. Grade: