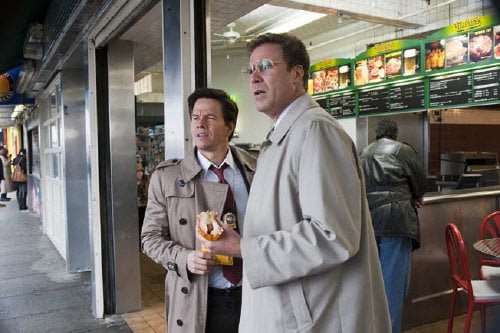 NYPD Detectives Danson (Dwayne 'the Rock' Johnson, "The Tooth Fairy") and Highsmith (Samuel L. Jackson, "Iron Man 2") are quintessential celebrity flash cops, beloved by both the force and the public even when they incur 2 million in property damage over 1/4 lb. of pot. Desk jockey Terry Hoitz (Mark Wahlberg, "Date Night") is itching for similar action, but his partner, former accountant Allen Gamble (Will Ferrell, "Step Brothers"), keeps hiding behind his paperwork. When financial wheeler dealer David Hirshon (Steve Coogan, "24 Hour Party People," "Hamlet 2") comes under suspicion however, Gamble's got a bead on a dozen scaffolding violations and springs into action while Hoitz rolls his eyes wondering when they'll ever break away from being known as "The Other Guys."

Cowriter/director Adam McKay ("Step Brothers") takes another shot at what Kevin Smith attempted earlier this year with "Cop Out" - turning the buddy cop movie on its ear by celebrating and satirizing the cliches - but while he and cowriter Chris Henchy ("Land of the Lost") have a greater level of success, aided by the amusing improvisations of Ferrell and Wahlberg (i.e., tuna vs. lion), he can't sustain the film. It starts off solidly amusing, denigrates into fits and starts and winds up like a million other lame comedies. Something's strange when Eva Mendes is funnier than Steve Coogan. Whoever cut the trailer for this film should be given a bonus as it highlights most of what's good about the film without spoiling all the gags. The film opens hilariously cruising on the testerone fumes exuding from the Rock and Jackson before focusing on the odd couple that is Gamble and Hoitz (some kind of pun intended?). Ferrell is perfectly stone faced dead pan as Gamble, until Hoitz gets him to open up about the past that made him want to play it safe. Wahlberg is mostly apoplectic as Hoitz, a condition which suits the character. Their boss, Captain Gene Mauch (Michael Keaton, "The Merry Gentleman"), keeps downgrading Gamble's weaponry, especially after he's punk'ed into falling for the 'Desk pop' by firing his weapon in the office, and working TLC lyrics into his rejoinders. Hoitz retains his gun, even though he's known as 'the Yankee Clipper' after mistakenly shooting Derek Jeter in Game 7 (a moniker Red Sox fan Wahlberg must have been proud of). After their initial arrest of Hirshon fails, the once antagonistic team decide to 'start fresh,' and soon Gamble sniffs out a $32 billion white collar crime in the works. Along the way, Hoitz will be perplexed by his partner's effect on the opposite sex, beginning with the 'hotter than hot' wife Sheila (Mendes) whom Gamble dubs merely 'cute;' they'll struggle with their good cop/bad cop routine; deal with a bunch of homeless guys led by Dirty Mike (director McKay) who like to have orgies in their Prius and eventually learn how to recognize a bribe *before* they take one. Unfortunately, once the duo get solidly on the trail of Hirshon's real crime, the laughs begin to evaporate. Oh, there are still a few to be had, like Allen's makeup with Sheila using his mother-in-law as the go-between deliverer of increasingly raunchy messages, Hoitz's taunting of unmacho behavior with is own 'sarcastic' interpretations and the final climactic shoot out featuring Chechnyans in a helicopter, Nigerians on motorcycles and Wahlberg sliding down a conference table two guns blazing, but mostly the film begins to churn through the motions. It's all the bigger letdown for the solid buildup. Ferrell has become almost obnoxious on screen of late, but he's really in his element here - deadpan suits him and is a good foil for Wahlberg's histrionics (anyone who doubts Wahlberg's comic chops should check him out in "I Heart Huckabees"). Eva Mendes is perfect as the put upon wife who dotes on her man as his partner lusts. Keaton's as good as his writing in the classic role of put upon police captain (the best comedic rendition goes to Alan Arkin in "So I Married an Axe Murderer"). But Steve Coogan is a bust as the bad guy, a funny running gag about designer water not attributable to his performance. Also odd is Anne Heche's casting as the client Hirshon's bilking others to placate - her role is so minor it screams cutting room floor. Some other tiny roles do stand out, however, like Bobby Canavale's brief stint as a trigger happy cop and Natalie Zea and Brett Gelman as Allen's lusty ex and her creepy husband. Watch for Malachy 'brother of Angela's Ashes' Frank' McCourt as an old geezer in an Irish Bar where Ferrell trots out his penchant for singing to fizzling effect. McKay stages his explosions with gusto (one's even self-referentially analyzed) and his car chases with confused editing, just like the real thing. Like "MacGruber," soundtrack choices go against the grain for comic effect. "The Other Guys" is an archetypal mixed bag - it starts out great, devolves into set pieces which work intermixed with dull stretches before settling into utter mediocrity. Still, when it works, it's really funny and even original at times.