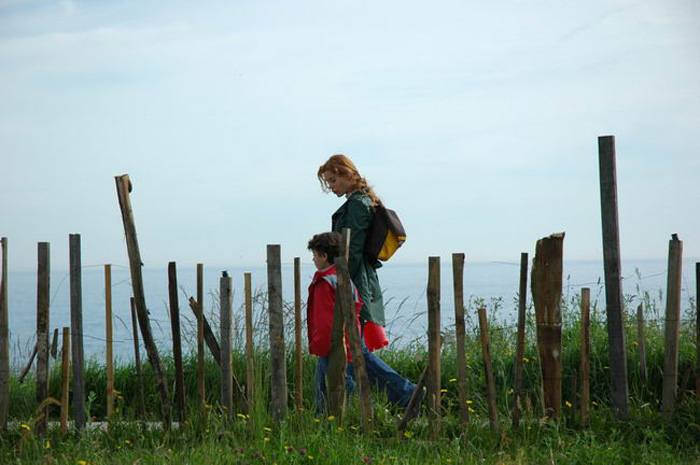 Laura (Belén Rueda, "The Sea Inside"), who was lucky enough to be adopted as a young girl when many of her friends were not, is now married with an adopted son of her own. Remembering her playmates, most of whom were disabled, Laura and her husband Carlos (Fernando Cayo) are determined to selflessly carry on the work of those who gave her her start in life, by returning to and reopening "The Orphanage."

In recent years, Spain has been producing cerebral horror flicks of the ghostly subgenre with such offerings as "The Others" and "The Devil's Backbone." With the backing of the latter's director, Guillermo del Toro ("Pan's Labyrinth"), debuting feature director Juan Antonio Bayona melds fairy tales with frights, setting his tone in his very first image - a children's game rendered inexorably creepy - after an opening credit sequence that imaginatively shreds ones nerves with its sinister shredding wallpaper revealing nothing but black. Laura and Carlos haven't even settled in when their son Simón (Roger Príncep) begins to exhibit strange behavior echoing Laura's childhood. He seems to have six imaginary playmates who will not get any older. Neither will he, he informs mom. A visit to the nearby seaside (where a cave exists that is flooded at high tide) is followed by a pile of seashells left at their door. A weird old woman wearing Mr. Magoo glasses claims she's a social worker there for the boy, then hovers in the grounds after Laura throws her out. As the orphanage's open house approaches, Simón becomes more agitated, letting his mom know he's onto her long held secret about his parentage. Then, on the day itself, Laura is terrorized by a small child wearing a sack mask. When she comes to, Simón is missing. Sergio G. Sánchez's screenplay mixes elements of "Peter Pan" with horrors old and new and while he doesn't spare the chills, Bayona's film is a melancholy reflection on loss. Gothic elements - institutionalized abuse, the unknown strangeness of disabilities to the healthy - are mixed with more modern references to cinema - "The Omen's" balustrade attack, "The Haunting's" ghost hunters, "Blair Witch's" night vision, and, strongest of all, "Carrie's" score (and ending, hinted at only here). Rueda is strong as a grieving mother who spends month after month searching for her mysteriously missing child, but strong splashes are made by the oddities who cross her path, beginning with Montserrat Carulla's faux social worker (her dispatch also recalls "The Omen" in its sudden intensity). Edgar Vivar ("Bandidas") recalls "Whatever Happened to Baby Jane's" Victor Mature as the severely obese Balaban, the ghost consultant who brings in Aurora (Geraldine Chaplin, "Nashville," "Talk to Her"), a seer who connects with a place's past. The child whose spirit haunts the Good Shepherd Orphanage, Tomas, is usually seen masked and Bayona makes him terrifying, visually linking him to a scarecrow seen in flashback. The final truths are very artfully revealed and every puzzle piece connects with a neat, satisfying click. Although it is in service to its story, "The Orphanage" loses its creepy edge in its final acts, becoming more of a mystery thriller, then almost a fairy tale. This final lean towards the saccharine should have been cut with strychnine, but Bayona chooses sorrow and it works within his allegorical construct. "The Orphanage" is well worth entering.