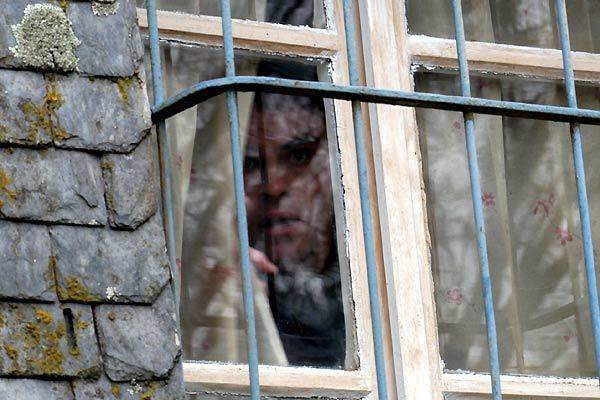 Travelling entertainer Marc Stevens (Laurent Lucas, "In My Skin," "Lemming") uses his sex appeal to entice women whom he must later dodge as he moves on, but he becomes one of them, transformed into a feminine object of desire, a standin for an entertainer just like him. She was once married to the crazed innkeeper who offers a stranded Marc assistance, but instead puts him through "The Ordeal."

This Belgian allegorical horror by cowriter (with Romain Protat)/director Fabrice Du Welz pays homage to the genre while creating its own crazed perspective studded with religious symbolism. Horror enthusiasts should be pleased with an offering that's not just skin deep. After Marc's corny performance at an old age home, one of its denizens mistakes his eye contact for a come-on and the desperately lonely head nurse all but begs him to stay. But it's Christmastime, and he must continue on to a bigger gig. When he breaks down, he's found by Paul Bartel (Jackie Berroyer, "Sequins" - the character is named after the character acting director of "Eating Raoul"), who tows his truck to his remote inn. Bartel is also desperately lonely, having been left by his wife Gloria who was also an entertainer. Paul, who also claims to be a stage pro, tells an odd joke about a red-jerseyed dwarf soccer team, then demands a song before allowing Marc, who reluctantly indulges with a love song, to turn in for the evening. After several confrontations with the simple-minded Boris (Jean-Luc Couchard) who spends his time tearfully searching for his dog Bella, Marc comes across a disturbing scene in a barn where several villagers are indulging in sex with animals. When he begins to realize Bartel has no intention of getting his truck fixed, his life becomes even more surreal. His host binds him, crucifies him, sheers his head, clothes him in a dress and calls him Gloria. Those other villagers turn out to be led by Robert Orton (Philippe Nahon, "Irreversible," "High Tension"), a man who had designs on Bartel's wife, and Marc is subjected to "Deliverance" style affections and the dinner scene lunacy of "The Texas Chainsaw Massacre" (complete with eyeball closeups). Du Welz is visually imaginative and repeats themes throughout his film. That senior citizen who forlornly watches her nurse attempt to hang onto Marc from an upstairs window later becomes Marc himself, imprisoned at the inn. Bartel's weird joke is make literal as March espies a bunch of kids in red hooded jackets playing soccer in a field (and a visual allusion to the red hooded dwarf of Roeg's "Don't Look Now"). The descent into subhumanity is accompanied by a succession of named animals, as much a part of this depraved society as their crazed caregivers. The entertainment theme becomes a surreal swirl as the villagers play music and sing in a bar. Marc's attempt to outrun his tormentors is set in the blackened landscape of WWI battlefields and the fate that befall him and his pursuer visualize the biblical lament of Psalm 69. "The Ordeal" may seem simply a strange homage to other films that spins into its own warped weirdness, but it is the type of film that will reward multiple viewings. It's the unexpected creepfest that's beautifully realized, unsettling to watch, and invites discussion and thought when it's over.

This is a strange, compelling horror film that is decidedly for the fans of the genre and not, definitely not, for the mainstream moviegoer. “The Ordeal” starts off routinely enough as Marc Stevens (Laurent Lucas), a chanson singer, travels across the countryside to his next gig. It’s nighttime and raining cats and dogs when Marc’s car breaks down on a road in a secluded forest. Amazingly, a young man happens by looking for his lost dog and he leads the stranded singer to a closed motel owned by lonely Monsieur Bartel (Jackie Berroyer). Bartel welcomes the stranded traveler, feeds him dinner (which he does not partake in, much like the infamous Count Dracula) and sends Marc to bed. Stevens plans to get a good night’s sleep and fix his car in the morning. His plans are not to be. The Ordeal” can be compared to the classic horror film, “The Texas Chainsaw Massacre,” and the similarities between them are many. But, “The Ordeal” makes this genre film of an innocent being thrust into a place of evil its own with its strange and bizarre locals and the titlular ordeal that Marc must endure. Definitely not for the squeamish or faint-at-heart.