The Oogieloves in the Big Balloon Adventure 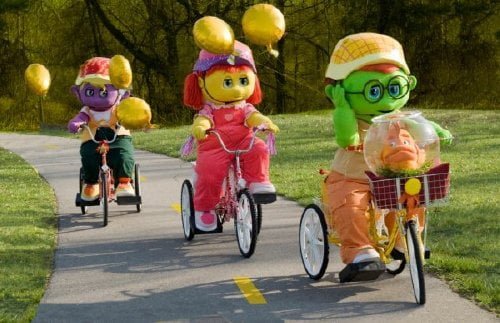 When J. Edgar (voice of 'Glee' dancer Nick Drago) arrives at Goobie (voice of Misty Miller), Zoozie (voice of Stephanie Renz) and Toofie's (voice of Malerie Grady) house, he has to tell them the wind snatched away the surprise birthday bouquet meant for their friend Schluufy. Thankfully Schluufy's still fast asleep (he's a pillow, that's what they do), so with the help of Windy Window (Maya Stange, "Garage Days"), who can look out over all of Lovelyloveville, the trio and their goldfish Ruffy (voice of Randy Carfagno) set out to save the day in "The Oogieloves in the Big Balloon Adventure."

From marketing promoter Kenn Viselman who brought us the Teletubbies and "Thomas and the Magic Railroad," which I loathed, comes the movie whose promotional materials in local theaters have been scaring film critics for months. But the surprising truth of the matter is, The Oogieloves play a lot like Teletubbies in Pee Wee's Playhouse and it looks to become a staple in many a small child's DVD collection and possibly a cult item in college dorm rooms. The film's opening doesn't bode well. We meet Goobie, the green one into science and engineering, Zoozie, the female yellow one into language and Toofie, the purple adventurer, on a spare stage set where they perform their signature song and it's all very cheesy, but then we're transported to Lovelylovelville and the real movie begins. The first character we meet is the distraught J. Edgar (get it? He's an upright vacuum.) The Oogies calm him down and check Schluufy (you can be excused if you, like me, mistake the poof of pillow stuffing that escapes his sleeping mouth for a puff of ganja smoke) and start to make their plan. J. Edgar will stay behind and transmit Windy's instructions via walkie talkie. There are five balloons to be found (which is two too many), so there are five separate adventures to be had. The first is found in a tree inhabited by Dotty Rounder (Cloris Leachman, "The Last Picture Show," TV's 'Raising Hope'), a woman into circles and orbs, and her granddaughter Jubilee (Kylie O'Brien) who sports a square motif. There's a song at each stop, but the first is troublesome because Leachman looks lost in dementia until you realize it's a badly synced sound dub (which continues throughout). Balloon retrieved by the adventurous Toofie, the foursome move on to Milky Marvin's Milkshake Manor where Marvin Milkshake (Chazz Palminteri, "The Usual Suspects," TV's 'Rizzoli & Isles') is offering the second balloon as a prize in a milkshake drinking competition. Ruffy proves his stuffy. The next stop is the film's low point, an unconvincing airline hanger where Rosalie Rosebud (singer Toni Braxton) is preparing to leave on a world tour with that third balloon. When it floats to the rafters, its the science nerd Goobie who figures out how to get it. But he also rejects the idea that it can talk because a balloon doesn't have that capability, despite the evidence to the contrary back in his own house where a vacuum cleaner is talking to a pillow and a window. The best stop is at Tricky's Trailer Truck Stop where Cary Elwes ("The Princess Bride," "Saw") throws his all into the part of Bobby Wobbly, turning his legs into bowlegged springs and blowing bubbles galore. Linguist Zoozie turns all Dr. Dolittle to get Penelope the Puffin to retrieve a balloon. The final one is the trippiest segment which mashes up flying Mexican Sombreros and Spanish flamenco at a Dutch windmill. Jaime Pressly's (TV's 'My Name Is Earl') Lola (what? was Sofia Vergara tied up opening a parking lot?) dances to Lero Sombrero's (Christopher Lloyd, "Back to the Future," "Piranha") accompaniment and kisses a fish - 'Holy Mackerel!' indeed. The film has been hyped as being 'interactive' which sounds chaotic but is actually handled pretty well. Kids are instructed that they can stand up and dance when they see butterflies cross the screen (and only if their 'big person' says it is OK) and should sit again when turtles appear. Repetitive phrases, like telling Toofie to pick up his pants when they fall, are dished out like mini singalongs. The movie's designed to show different characters using different talents in creative thinking while also engaging kids in some fun. Unfortunately, despite the encouragement to move around, the movie's food message isn't a healthy one.