The One I Love 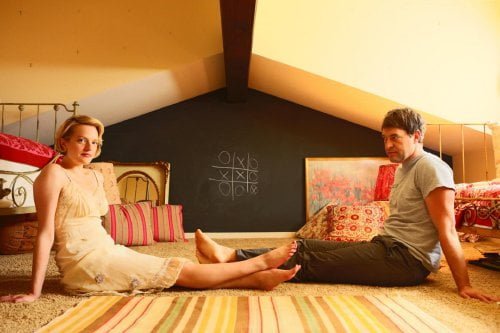 In a last ditch effort to save their marriage, Ethan (Mark Duplass, "Tammy") and Sophie (Elizabeth Moss, AMC's 'Mad Men') retreat to a beautiful weekend spot where they must reconsider just who is "The One I Love."

One stunning location, two main stars, family ties and a script (by Justin Lader) that is a narcissistic science fiction twist on 1945's Dorothy McGuire and Robert Younger starrer "The Enchanted Cottage" is the means to a clever directorial debut by Charlie McDowell (son of Malcolm and Mary Steenbergen) which examines how much of our own needs we project onto our romantic partners. This amusing romantic comedy also teaches a valuable lesson, in that it is human nature to see what we are looking for when perhaps it isn't entirely there. We first meet Ethan and Sophie with their therapist (Ted Danson, whose wife Mary Steenbergen is the voice of Ethan's mom on a phone message) and while it is clear they both hope to remain a couple they are going about it in such different ways that it is sabotaging their efforts. Asked to simultaneously hit a piano key, the therapist determines that they are very out of sync and suggests a special retreat. They arrive at a stunning, secluded house with beautiful grounds and views. A digital picture frame reveals many other couples who have rediscovered each other during their stays. Sophie's brought along a bag of weed and as the two eat dinner, drink wine and indulge in pot, they really appear to be enjoying each other's company. Sophie wanders off to poke around the charming little cottage that is the home's guest house and finds Ethan there too. Their lovemaking is exciting, but the next morning Ethan claims not to remember it. They argue, then agree to forget about it until they learn something very strange about where they are staying that will have a profound impact on their relationship. Duplass and Moss, who were encouraged to improvise much of their dialogue, have a unique challenge here (which cannot be revealed) and both are up to it. Issues of trust and acceptance of character flaws are handled differently by each with an added dimension that makes for some very intriguing acting interplay. McDowell uses his one location ingeniously, different spaces reflecting different emotional stakes. Special effects are seamless. If there is a problem with the film, it is in the ambiguous ends of the therapist, the story's ultimate reveal of its science fiction concept a little less than satisfactory. But that is not "The One I Love's" end game. Couples should find this film most provocative, but those looking for a date movie might begin looking askance at their partners. Grade: