The Old Man & the Gun 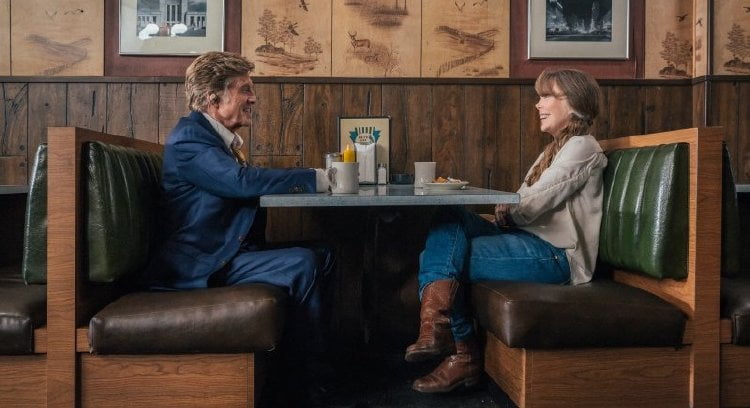 Forrest Tucker (Robert Redford) has had a long career of bank robberies, arrests, imprisonment and escapes. He is now in his twilight years but his desire to practice his decades-long criminal trade has not diminished one bit for “The Old Man and the Gun.”

On August 4, 1981 in Belmead, Texas, a handsome older gentleman stops to assist a woman on the side of a highway as several police cars speed by. An attraction sparks and Bill Callahan (Robert Redford) asks Jewel (Sissy Spacek) out for coffee, where she jokingly tells him she stole the truck he helped her get started. Bill continues to court her as detective John Hunt (Casey Affleck) begins tracing the MO of the bank robbery he'd unwittingly witnessed across state lines, one carried out by a happy, gentlemanly senior citizen in "The Old Man & the Gun." Adapting David Grann's New Yorker article, writer/director David Lowery ("A Ghost Story") revives the romantic outlaw genre and it is the perfect vehicle for his "Pete's Dragon" star Redford (Redford has recently retracted his declaration that this would mark his retirement from acting). Not since 1982's "The Grey Fox," in which the late Richard Farnsworth portrayed stagecoach robber Bill Miner, has a true story about a gangster been so wistful, so enchanting, so seductive in championing the criminal. The central romance that is the film's heart goes a long way towards softening our view of Forest Tucker (Bill's real name), but so does his modus operandi, a quiet request for cash conducted with gentle gallantry. (As the film progresses, the fallout gets harsher, a carjacked mother and child terrified, even as Tucker drops them off to safety.) Lowery follows parallel paths. On the same day Tucker meets Jewel, John Hunt is celebrating his fortieth birthday. He begins his day by stopping at the bank on the way to dropping his kids off at school. He's in line for the teller's window, unaware as Tucker's low key robbery goes down and becomes obsessed with the case. He links a string of robberies, dubbing Tucker's crew 'The Over the Hill Gang.' Subsequent media attention results in a letter from Dorothy (Elisabeth Moss), the daughter who finally unveils Tucker's identity. But the man who just loves robbing banks only grows bolder, even confronting Hunt in the men's room of the Blue Jay diner, Tucker and Jewel's spot where Hunt has happened to bring his wife (Tika Sumpter, "Southside with You"). Just before Hunt finally catches up with him (ironically, he's taken out one of Jewel's horses, never having ridden before), Lowery presents us with a montage of Tucker's sixteen astonishing jail breaks, including one from San Quentin at the age of 70, and it's a corker. And when he's jailed, it is the independent widow who convinces him to stick around this time. Redford and Spacek are so easy and playful together, it's surprising it's taken this long to pair them. They have a delightful scene in a mall jewelry store, Tucker guiding Jewel out with an unpaid bracelet on her arm. Spacek is giddy, but her moral compass drags her back and he acquiesces, pulling out his wallet. Getting less notice but also noteworthy is Affleck, also cast as a romantic in his interracial relationship with wife Maureen. He's really marvelous here, the type of man Tucker would be on the right side of the law. Redford enjoys a relaxed camaraderie with his associates, Danny Glover's Teddy and Tom Waits' Waller, the latter's run-on stories one of the film's highlights. The senior-leaning cast is accompanied by an old-fashioned jazzy score with lots of snare and it's just right. Redford has portrayed the charming thief before in such films as "Butch Cassidy and the Sundance Kid" and "The Sting." If this proves to be his swan song, he couldn't have picked a better one. Grade:

I did not realize it until I saw what may be Robert Redford’s last time, as the star, in front of the camera, but I had a big yearning in my gut for a good, old-fashioned biopic about a charming bank robber at the end of his illustrious criminal career. “The Old Man and the Gun” sure as heck satisfies that hanker. We meet Tucker as he, very politely, shows his gun to a bank teller, gives a reassuring smile, thanks her politely and walks away with a briefcase full of money. He drives away, changes cars and, as he heads to his safe house, stops on the highway to help a damsel in distress. This brief opening interlude tells us volumes about Forrest Tucker and how he ticks. If this is Redford’s acting swan song, he is going out on a very good note with his performance as a man who is the master of his craft and in his twilight years - like Redford himself. From the first minute, as you watch Tucker ply his trade, you are empathetic to the criminal. The gentleman bandit persona fits the actor so well that he makes it all believable. (I also read David Grann’s 2003 New Yorker article about Tucker for more background – which, all the more, shows how well Redford is cast in the role.) While this is about the Old Man of the title, writer-director David Lowery uses David Grann’s article as the base for a more fully developed story. The (fictional?) damsel he saves at the beginning, Jewel (Sissy Spacek), forms the start of a courtly romance between her and the bank robber, and it fits the story. There is also a parallel thread to Tucker’s story involving police detective John Hunt (Casey Affleck) who is assigned to Forrest’s latest heist. (Hunt’s introduction to Tucker and his Over the Hill Gang is done in an amusing juxtaposition scene.) The cat-and-mouse element just adds another dimension to the old fashioned true-life yarn. And, not to be neglected, Danny Glover and Tom Waits are first rate as Teddy and Walter, the other members of the OHG. During a drinking interlude between capers, Walter tells a “And, that’s why I hate Christmas” story that is beyond priceless. I fear that this kind of good, old-fashioned storytelling about colorful criminals who ply their trade with the threat, but never the act, of danger is passing away. This is a Robin Hood and his Merry Men kind of tale that just makes me feel good. Redford proves himself a first among equals and he, his costars and their helmer-scribe create a well-crafted film about a man, as you watch, that you root for. The stats about his robberies and escapes boggle the mind.