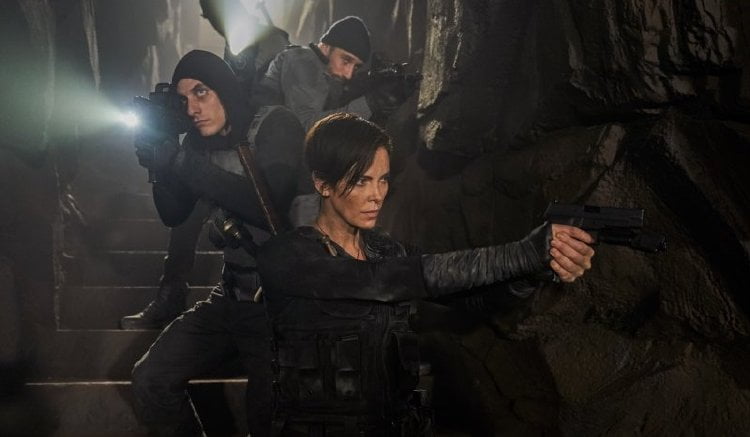 Andy (Charlize Theron)   is justifiably tired after centuries of fighting evil, but when ex-CIA agent Copley (Chiwetel Ejiofor) shows she and her partner Booker (Matthias Schoenaerts, "The Mustang") video of young girls being held captive in Sudan, she must act.  Andy and Booker make their plans with fellow immortals Joe (Marwan Kenzari, "Aladdin") and Nicky (Luca Marinelli, "Martin Eden"), while in Afghanistan, a young Marine, Nile (KiKi Layne, "If Beale Street Could Talk"), is about to learn the drawbacks of joining “The Old Guard.”

Director Gina Prince-Bythewood ("Love & Basketball," "Beyond the Lights") knocks her first action movie out of the park, her background in romance coming into play in the most startling and deeply meaningful way here.  With Greg Rucka adapting his graphic novel series and Theron on board as a melancholy badass with deadpan wit, “The Old Guard” looks to be the beginning of a very welcome franchise.

The film opens with the foreshadowing of what we don’t yet know is a set up but which illustrates our warriors’ immortality and Andy’s (a modernization of Andromache the Scythian) disillusionment with the human race.  When we revisit the scene still within the film’s first act, we watch Andy and her three soldiers taken out with automatic sprays of hundreds of bullets.  Then Andy’s ‘dead’ eyes refocus while a bullet pops out of the forehead of one of her men.  She stands up and sees the hidden cameras that have recorded it all.  Once again, there is profit to be found in weaponizing super heroes.

But while “The Old Guard” follows many genre conventions, it also has some deeper things to say about the burdens of immortality and the never ending fight against evil.  Take Nile, for example, immediately regarded with suspicion by fellow Marines who saw her killed only to find her alive in a medical tent.  It turns out that immortals are very rare (and not exactly immortal, either – they eventually do die and won’t necessarily know when their time is up) and when a new one evolves, they will dream about each other until the latest can be found and brought into the fold.  Just as Nile is told she’s being sent to Stuttgart for ‘testing,’ Andy swoops in and kidnaps the young woman.  Appraised of just what’s happened to her, Nile is now facing a life without ever seeing friends and family again.  (Her initial resistance, staged as hand-to-hand combat on a rickety cargo plane, is played well by Prince-Bythewood for both action and humor.)

Nile’s indoctrination allows some organic exposition in which we learn that Andy is the oldest, a female warrior from ancient times, while Booker was a soldier in Napoleon’s army and Joe and Nicky killed each other so many times from opposing sides of the Crusades, they just gave up and become fast friends and lovers (later, in one of the film’s best scenes, Joe will express his love of Nicky so profoundly he will stop hardened combat troops dead in their tracks).  We will also learn of Andy’s great sorrow when she recounts the blood-curdling fate of her old ally Quynh (Van Veronica Ngo, "Da 5 Bloods'" Hanoi Hannah).

The movie, filmed in Morocco and the UK, sports a look that mixes the ancient with the modern “The Old Guard” is a female led actioner that’s smart, kickass and entertaining with a notable soundtrack assembled by Music Supervisor Julia Michels.

A team of four mercenaries travel the world to do good deeds and make change. Their deeds are possible for one excellent reason: they are immortal and cannot die. The secret to their invulnerability, though, is in danger of being discovered – for evil and not for good – in “The Old Guard.”

What we have here is an adrenalin-pumped actioner with lots of violence, shootouts and an ever-increasing body count, on one hand, and a film with a firm stance on feminine empowerment on the other. Directed by veteran helmer Gina Prince-Bythewood and based on the popular graphic novel by Greg Ruck (who wrote the screenplay) and Leandro Fernandez, the film stars Charleze Theron and KiKi Layne, as the most senior and most junior of the team of immortals and their fight to survive.

Andy (Theron) heads the small but lethal team of mercs – Booker (Matthias Schoenaerts), Joe (Marwan Kenzari) and Nick (Luca Marinelli) – across the globe trying to put a stop to evil-doers. Then, two things happen: they all sense a new member to their exclusive club and an evil Big Pharma honcho, Stephen Merrick (Harry Melling), is going all out to find out their secret – and weaponize it on a huge scale.

With all the guns and violence on display, one would not expect the strong message of female equality and, at times, superiority to their male peers. Andy is a complex character and she has learned to cope, long ago, with the loneliness of being immortal – Theron gives a effective soliloquy to their newest member, Nile (Layne), of what it means to be truly “alone” – and finds solace the companionship of her fellows.

The shell of the direction of the story is simple: greed (you know, the thing that makes the world go ‘round). The immortals, we learn, have been fighting the battle of good for hundreds of years. Their immortality comes under the scrutiny of evil pharma honcho Merrick who wants to learn their secret, something they do not know themselves. So, the bad guys plan to take all four, dissect and examine them – but do not know about Nile.

This sets the stage for the abovementioned “lots of violence, shootouts and an ever-increasing body count” as the fabulous five take on the many henchmen sent to take them. Of course, you root for the good guys, for the right reasons, and want to see the bad guys pay the price for the badness. Immortal versus mortal is a lopsided battle, in a good way.

Early on in “The Old Guard,” there is an inkling of a hint of the possibility that there may be a sequel in store. The filmmakers on both sides of the camera, by the end of the movie, make me want that inkling to be real.