The OH in Ohio 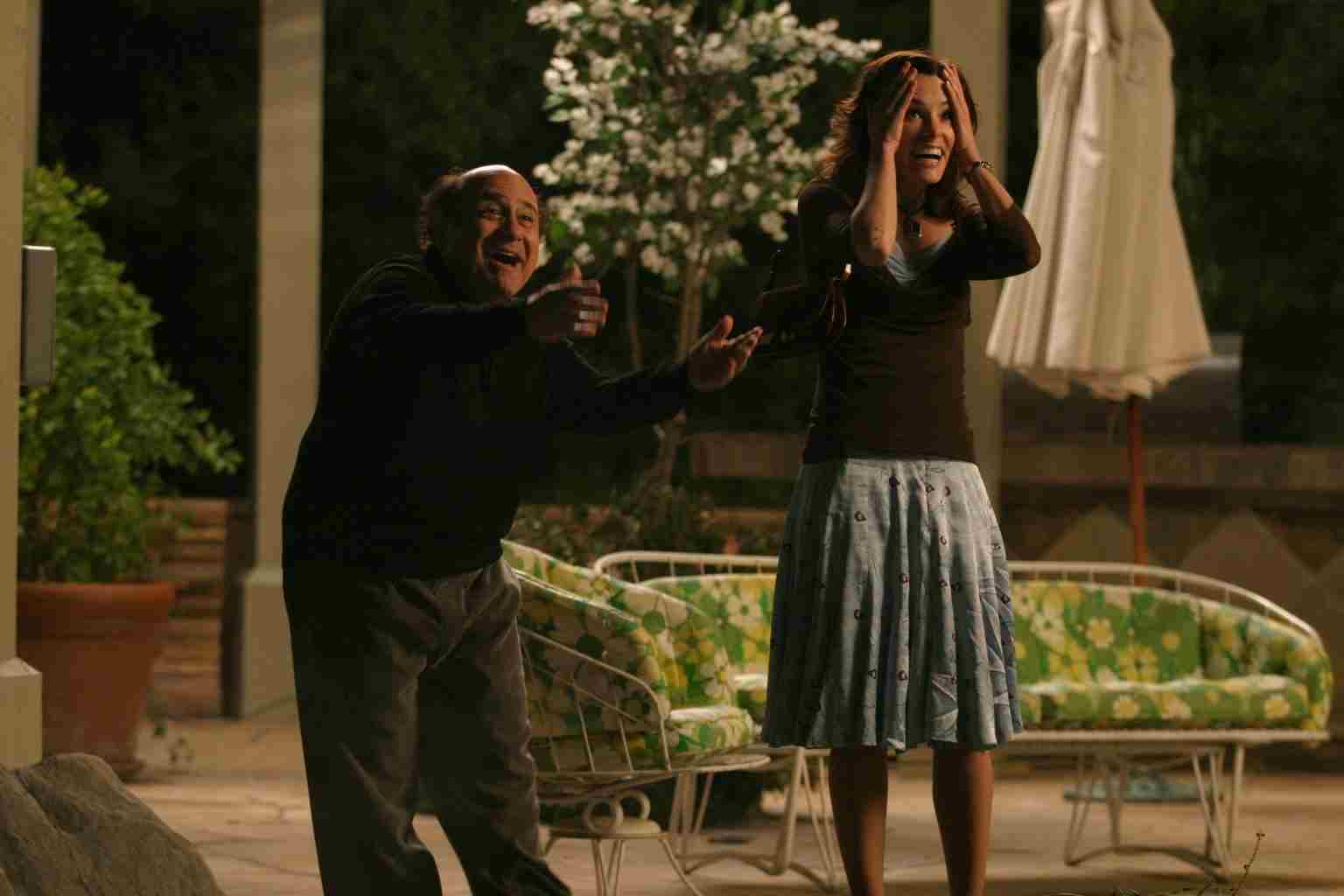 Priscilla (Parker Posey) is an ad exec for the City of Cleveland, OH. Husband Jack (Paul Rudd) is a high school teacher in that burg. So far, so good, except, in 1842 sessions of lovemaking, Jack has never given his wife an orgasm, a fact that drives him to distraction. The couple, in frustration, splits up and go their separate ways to find “The Oh in Ohio.”

Priscilla Chase (Parker Posey, "Superman Returns") is hot bringing business to Cleveland, but cold in the boudoir. Frustrated, her high school teacher husband, Jack (Paul Rudd, "The 40 Year Old Virgin"), is having an affair with his sixteen year old student Kristen (Mischa Barton, TV's "The O.C."), but Priscilla couldn't care less once she discovers the joys of the vibrator that put "The OH in Ohio." Indie queen Parker Posey's peppy shrill schtick plays OK in comedic supporting roles but cannot support an entire comedy when put front and center. One must endure an hour of Priscilla's mostly unfunny sexual self discovery and writer/director Billy Kent's crude gags until the film mutates into something almost wonderful in its final third, rescued by unlikely romantic foil Danny DeVito ("Be Cool") as Wayne the Pool Guy. That first hour, though, is spent alternating between Priscilla's encounters with all things vibrating and Jack's growing relationship with his teenage girlfriend. Rudd, a kind of Everyman with schlumpy sex appeal, is a likable actor, but he's left with a story that goes nowhere, dead ending as a lift-off pad for Devito's third act appearance. Meanwhile Posey is left imitating the famous "Harry Met Sally" orgasm scene in front of a board of Japanese businessmen, one of several unprofessional acts that do not lose her her high paying job. When she's not acting like a ditz at work, she's amazing a lesbian sex shop clerk (Heather Graham, "The Guru") with her voracious purchases until said clerk yells 'addiction!' And yet Priscilla still cannot have an orgasm with a sexual partner (as is evidenced in a creepy and distasteful montage of one night stands). That's where Wayne the Pool Guy comes in and although he's shoved into the story with a crowbar (Priscilla's the only one in her neighborhood who hasn't purchased a pool from him), once he's in the hole fabric of the film changes. DeVito's Wayne not only makes Priscilla laugh, he achieves real chemistry with her and damned if their sexual pairing doesn't seem like the rightest thing on earth. Their are a few brief moments of fun before his appearance, mostly due to supporting players like Liza Minnelli's over the top masturbation guru and Keith David's ("Crash") Coach Popovitch, a sounding board for Jack. Technically, this isn't one of those films that has exceeded the expectations of its budget - it all looks rather flat and cheesy. In fact, these problems are writ large all over its advertising poster, one of the most horrifically awful I have ever seen - it makes the film look like a second rate Europudding porno comedy. "The OH in Ohio" isn't a very good movie, but Danny DeVito's heroic performance and towering charm allows it to go out on a grace note. Who would have thought that Danny DeVito as a romantic lead could almost save a picture?

The co-directing team of Billy Kent and Adam Wierzbianski make their debut with a comedy about sex and love in the American mid-west. Priscilla has never had an orgasm in all her sexual lifetime. This failure to launch is the source of Jack’s aggravation despite his wife’s claim that she is perfectly happy with their sex life. This bone of contention erodes the marriage to the point where Jack announces his departure and moves out of their home. Once they split up, Jack succumbs to the attention of his best student, 18-year old Kristen (Mischa Barton), a beautiful and very intelligent young woman mature beyond her years who takes her teacher under her wing. Meanwhile, Priscilla decides that, if she is to be happy, she must overcome her frigidity and seeks the help of sex therapist, Alyssa (Liza Minnelli), whose advice is that she first learn to pleasure herself. Taking this advice to heart, Priscilla goes to a sex shop where the clerk (Heather Graham) sets her up with an autoerotic starter kit. She heads home to begin her personal adventure in sexual self-gratification and, for the first time in her life, has an explosive orgasm. Jack is extremely pleased when he and Kristen get it on and, for the first time in a long, long time, he satisfies his partner. Kristen stokes his libido and the teacher begins to take chances that could lead to the scandalous discovery of his extra-curricular activities. He brags about his newfound sex life to his best friend and fellow teacher, Coach (Keith David), who warns Jack that he could ruin his career if anyone else finds out. Jack does not heed the warning. Priscilla has done a one-eighty, going from being an ice queen to becoming obsessed with her new toy and ability to give herself pleasure – getting off, by her calculation, 13.5 times a day. She returns to the sex shop and the wise clerk tells her that she is overdoing it and needs help coping with her new pleasure. One day, Wayne the pool guy (Danny DeVito), a local legend who has installed every swimming pool in her neighborhood, approaches Priscilla. He offers her a deal on a new pool but, more than that, the two are attracted to each other, despite the age difference. During an innocent interlude in the long-time widower’s elaborate personal water park, they kiss and fall into each other’s arms. Priscilla has, for the first time, an orgasm with a partner. The Oh in Ohio” could have been a simple sex romp but is elevated above that by one thing – Danny DeVito as Wayne. Don’t get me wrong; Parker Posey and Paul Rudd do a fine job as the unsatisfied couple. But, the film goes in a predictable farcical direction that is amusing but rather two-dimensional. When Wayne comes on the scene and the romance between he and Priscilla begins, the film takes an upturn and becomes a rather sweet and touching romantic comedy. DeVito makes the difference here and the result is a comedy that is better than it should be. The supporting cast does a fun job fleshing out the background characters. Keith David is downright funny as Jack’s friend and confidant, Coach – though he is none to comfortable when his best friend confides that he, Jack, was told that he has a “magnificent penis.” Mischa Barton gives real dimension to Kristen as she helps Jack rejuvenate his broken ego while keeping herself focused on her own fast track life. Miranda Bailey is fine as Priscilla’s best friend, Shelly, who advises on her pal’s sexual happiness. Liza Minnelli gives an amusing, over-the-top cameo performance as the sex therapist who tells her students to get to know their vaginas, and hands out mirrors to them all. Techs are quite good for such a relatively small budget film. Nice use is made of the Cleveland skyline and Wayne’s swim park is a bit of a fantasy wonderland. In the end, “The Oh in Ohio” is both sex farce and romantic comedy with the emphasis on romance. It is an entertaining alternative to the Hollywood summer blockbusters. The sexual nature of the film will attract the tweeny crowd but the summer/fall romance between Priscilla and Wayne is the real draw, thanks to DeVito.